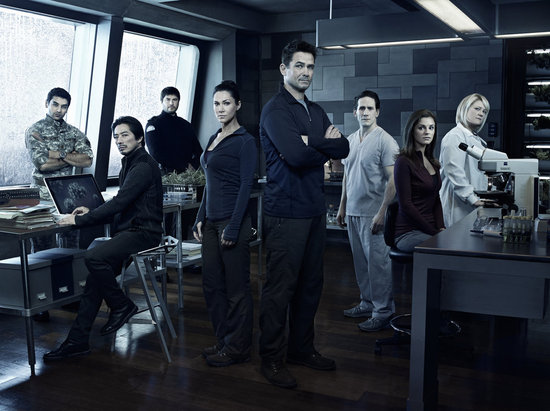 A remote research station in the arctic operates beyond international law. The scientists there toy with Mother Nature and unleash a new kind of virus that causes the infected to become mindless, enraged and super-strong. And who should come to the rescue but a small team of CDC experts on the trail of a pathogen unlike any they, or anyone, has ever seen.

Sound familiar? It is, but in all the right ways. Combine elements from John Carpenter's The Thing, The X-Files, Outbreak, 28 Days Later and Lost, and the result is Helix: Syfy's compelling new science fiction thriller series that gets under the skin and demands continued viewing as treatment.

Premiering Jan. 10 at 10 p.m., Helix is the brainchild of creator, and former World Bank and Federal Reserve worker, Cameron Porsandeh and executive produced by Ronald D. Moore of Battlestar Galactica. Not surprisingly, a handful of producers from The X-Files, Lost and Contact are also on board. Set in present day, the show is a freaky, paranoia-and-hypochondria-inducing trip where humans are as dangerous as the virus -- but make no mistake, that virus sucks too.

In the opening scene of the two -part premiere, the tone is immediately set with a character we later learn is Peter Farragut (Neil Napier) running terrified through the halls of the hi-tech Arctic Biosystems facility pursued by something that eventually catches up to him. The frantic shot is intercut with figures in protective suits walking calmly through the same halls. While Dionne Warwick's peppy rendition of "Do You Know The Way To San Jose" plays on a speaker, the two figures eventually enter a lab strewn with bodies, and one that's still moving: Farragut. He is covered in black goo and asks for help. Instead, Hiroshi Hatake (Hiroyuki Sanada), the head honcho of the facility, suggests water in what has to be the creepiest offer of a beverage ever. The liquid sprayed in Farragut's mouth activates some sort of alien-looking movement in Farragut's throat, which Hatake calls "progress."

We then meet Alan Farragut (Billy Campbell), a Centers for Disease Control scientist, and Peter's older brother. Alan and his rapid response team have been summoned from Atlanta to the arctic to contain the outbreak involving Peter. That team just happens to include Dr. Julia Walker (Kyra Zagorsky), Alan's ex-wife who cheated on him with Peter, and Dr. Sarah Jordan (Jordan Hayes), a young and motivated doctor who might be crushing on Alan. Also along for the trip up north are sarcastic veterinary pathologist Doreen Boyle (Catherine Lemieux) and Sergio Balleseros (Mark Ghanime), an Army liason and systems engineer.

When they assemble at the base, they've all got jobs to do -- to borrow from Herschel's mantra in The Walking Dead -- and the characters pretty much head their own way to try and prevent the pathogen's spread to the 106 people working there. As more is revealed about the mysterious virus, and the layers of deception and misdirection at play on the base, Alan notes that losing control could potentially mean a rapid spread to every major city in the world in about a month.

Despite the bio-threat setup, Helix isn't trying to be Contagion in the South Pole. What Porsandeh and Moore have crafted is solid science fiction, and feels like a return to the latter's Battlestar Galactica days.

The premise is unsettling, but believable. Though this writer doesn't claim to know the science of pathogens, the show seems grounded in reality. It doesn't play dumb or simply rely on made-up terminology. Yet it isn't difficult to imagine a research facility playing god and operating outside of government control.

And with each episode spanning about a day, the characters -- while they do refer to backstories and love triangles seem possible -- are more concerned with doing their jobs than talking about their feelings. As a result, it is easier to get caught up in the action along with them.

It is additionally refreshing to that all the characters, three of whom are strong females, are incredibly intelligent. Campbell earns his lead role by making Alan sharp but weathered. Hayes' Sarah is young and still inexperienced, but not doe-eyed or weak. Sure, Hatake comes off a bit like a mustache-twirling villain, but he is fun to watch. Some of Doreen's quips seem a bit forced, but Lemieux plays her like a nerd trying to cover up her awkwardness with sass (and she delivers the best inside nerd reference of the episode). Actually, all the characters are nicely established, save for chief of security Daniel Aerov (Meegwun Fairbrother), who just isn't working for me yet.

Though it is rooted in modern-day, Helix does have elements of the fantastic as well. The screener for the premiere contained unfinished effects, but hinted at some cool sciencey stuff. But there are enough gadgets and cool visuals to make me hopeful. The show has also already begun mythology-building. The Arctic Biosystems base, which at times looks like the interior of a Starfleet ship, is a division of the innocuously-named (genre-speak for shadowy) Ilaria Corporation. The word "Progress" pops up a lot, as does the phrase "Keep Calm and Carry On."

Warwick's song, which acts as the Helix answer to Mama Cass' "Make Your Own Kind Of Music" on Lost, pops up frequently in the initial episode. The warm, welcoming ditty is juxtaposition to the foreboding terrain of the arctic -- and the eerily sanitized, well-lit facility. It looks as cold on the inside of the base as it is outside. Speaking of the cold, fans of John Carpenter's The Thing already know the horrors that can take place, and thrive, in frozen barren terrain.

Then there's the black goo. Whether it's from Teenage Mutant Ninja Turtles, The X-Files, Daredevil and so on, everyone knows that goo/ooze leads to interesting reactions.

So yeah, the Helix DNA contains strands from a lot of familiar franchises, but the show doesn't feel derivative. To the contrary, it is a fresh sci-fi freak-out very much welcome on the TV landscape. And if additional episodes maintain the quality of the premiere, the show might have the makings of an infectious fan favorite.