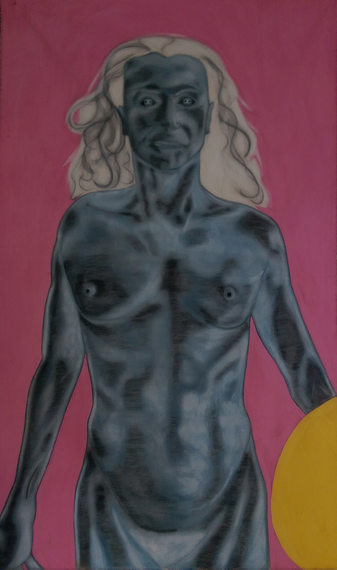 The first feeling to set in after the novelty of being in the right body wore off was anger. I became angry at everything to do with my gender.

I was angry at Fate for putting me in a boy's body to begin with. What cruelty to a human soul to trap it in a vessel that did not match, forcing contortions and discomfort and unease in every hour of every day. I consoled myself with promises that I would be a stronger person because of the struggles that dogged me; while everyone else, I believed, had a head start on life.

I was angry at my own body, even once it was closer to how it was supposed to be. My shoulders were still too broad, my hips too narrow, my Adam's apple too visible, my brow and jaw too prominent on my face, and my breasts too small and ineffectual. The best part of transition was also the worst: at last, long last, I could be made love to by a man - but I could not bear children and never would. Never mind that some regular women, and men, cannot make babies; I felt defective.

I was angry at the voice I heard from society, telling me back in those days to keep my mouth shut. Looking for my first job as an attorney, and then early on in my career, I was terrified that someone would clock me, or somehow find out, and all would be lost. Thus the fear of disclosure outlived my sex change, only in another form. I stayed quiet to protect myself from hazarding the unknown.

I was angry at men who ran away from me instead of opening their hearts. One after the other dumped me as soon as I talked about my past, or when, in one instance, the roommate of a guy I was dating got there first. I asked what difference could it make - we'd been to bed together the night before and woken up in each other's arms. Yes, however, it was somehow different now, he said.

I was angry at all those things, and more.

But mostly I was angry at myself for accepting all this shame in the belief that the blame lay with me. If only I had transitioned sooner, then I might have escaped some of the burns that testosterone scorched onto me. If only I had more confidence in myself, then maybe I could speak up. If only I knew the words to soften my history for men, then perhaps they would try to understand instead of shutting me out before they even gave me a chance.

If only I could focus on other thoughts, then none of these problems would consume me.

Now, almost ten years later, feels like a different world. Transgender women are on the cover of magazines - including me, in a cover story for a University of California Hastings College of the Law alumni publication - and being transgender may be an afterthought or even irrelevant. The former U.S. Attorney General Eric Holder announced that the Department of Justice interprets Title VII to include gender identity, and he recently said, "We will not allow unfair biases and unjust prejudices to prevent transgender Americans from reaching their full potential as workers and as citizens." And, on top of it all, the White House has a gender-neutral bathroom.

I remember seeing Lady Gaga at the Garden in 2011 and getting shivers just because she said the word "transgender" onstage. My eyes watered when President Obama uttered the word during his State of the Union address a few months ago.

As for me, over the course of the same decade, I fell in love with three men who told me I Love You. The first one knew about my past before we met; the other two did not. When it comes to believing the actuality of such love possible, it appears that the third time's a charm. The lawyer in me must weigh the evidence and conclude that human beings may have the capacity for change, just as sex itself does, and sometimes to the point of transcending acceptance altogether.

So I guess the question for any of us is: do you?

My answer is that no matter what my mind, mouth or fingers typing these words may say, my heart remains, for the time being at least, in this body. She may not be the one I would have chosen, but she is mine - and I am hers.