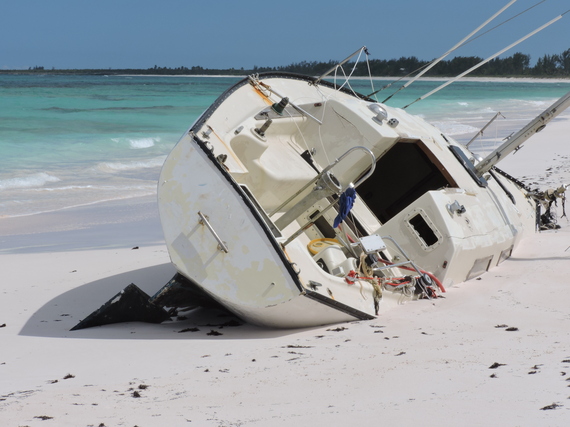 A boat packed with Haitian refugees was driven ashore one storm-tossed night this past winter on one of the Bahamian out islands.

It is not the first time Haitians have reached Bahamian shores in this way. The Bahamas are often a waypoint for boat people escaping the hell that is Haiti. Setting a course northwest directly for Key West is not an option, since this places the voyage a mere fifty miles off the Cuban coast. Added to that the refugees face a heavy US Coast Guard presence on the approach to the Florida Keys. A safer bet is to head north, and run through the long archipelago of the remote Bahamian islands. The ultimate destination is Florida, and the US-based relatives of these brave souls often send the funds needed to pay the smuggler sea captains. The going rate is two thousand dollars.

Small boats, which have seen better days, are purchased for about $10,000. The interiors are ripped out, leaving empty shells into which are loaded about 70 people, as was the case of the 35-foot sloop pictured above. The travelers are packed, shoulder to shoulder into these small craft, originally meant to accommodate six passengers at most. Think of those piteous illustrations from the 17th century showing the holds of slave ships and the crammed human cargo. The smuggler captains can net about $100,000 for each such voyage, after expenses. Then they return to Haiti to do it all over again.

The voyage is about five days if the winds are favorable, and up to ten days if otherwise. Under these conditions some people will actually go berserk, screaming and biting and flailing. They must be separated from the others and, on many voyages, those who go mad are thrown into the sea. Others become sick and die. They too are consigned to the depths.

Once the vessel is wrecked or purposely driven ashore, the survivors disperse into the bush. There they hide out and attempt to contact other Haitians already legally domiciled in the Bahamas. Typically, half of these asylum seekers are taken in and sheltered until arrangements can be made for the final leg of their journey over to Florida. Invariably, about half are rounded up by Bahamian officials and shipped back to Haiti.

Pope Francis called them "men and women who are our brothers and sisters looking for a better life." He was referring to the Libyan refugees, as many as 700, who died this past April after their boat capsized in the Mediterranean. It happened when the migrants rushed en masse to one side of the ship in an attempt to signal another vessel for help.

All over the world other of our brothers and sisters daringly seek to escape broken societies, tyrannies, and brutal punishing lives.

I know two things: first, if I was Haitian, or Libyan, or any nationality faced with such adversity, such hopelessness, I would do whatever I could to get on a boat heading out to sea and away from the calamity.

I also know, more than ever as I learn about the world, how much luck plays a part in all our lives. It is so often unacknowledged, so rarely even mentioned. I had the sheer luck to be born in Scotland, where life was hard but not impossible, where my parents weren't forced to risk life and limb to improve the lot of their children.

In further expressing his sorrow for the hundreds of Libyans who died, Pope Francis said: "These are men and women like us who seek a better life. Hungry, persecuted, injured, exploited, victims of wars. They were looking for happiness."

Simple happiness: three meals, a shelter from the rain, a job......any job. And the rule of law.

The morning following the shipwreck the Haitian boat lay mired at the shore in beach sand midway up its keel. In the brilliant tropical sunshine, the turquoise sea lapping nearby, I thought there could not be a more incongruous gravesite.

Inside this battered shell of fibreglass lay strewn the detritus of the fleeing passengers; packages of crackers, , socks, colorful bandanas.

It was now the graveyard of their broken dreams.