"I been poor my whole life. It's like a disease." And with that thought in mind, two brothers, Toby (Chris Pine, Star Trek's Captain Kirk) a divorced dad and Tanner Howard (Ben Foster, Lone Survivor) an ex-con, go on a bank-robbing spree in rural, arid West Texas where folk love guns, beer and their land equally. The men target branches of the Texas Midlands Bank, which is in the midst of foreclosing on their late mom's ranch. 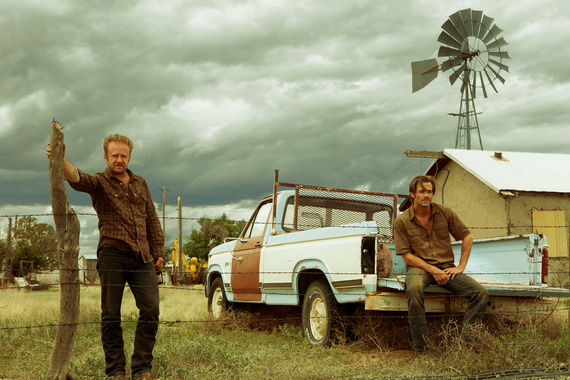 As you sit in the theater you feel the dust from the prairies, smell the stench of the cattle and expect tumbleweed to roll down the aisles. The atmosphere (director David MacKenzie, production designer Tom Duffield, set decorator Wilhelm Pfau, composer Nick Cave) is thicker than a cup of five-day old cowboy coffee. The cinematography (Giles Nuttgens, Fire) makes landscapes and street scenes look faded and parched from the harsh sun.

This modern day western tale of the poor robbing the rich is the concoction of screenwriter Taylor Sheridan, who was nominated for a Writers Guild of America Award for Best Screenplay for his extremely tense crime thriller Sicario. His attention to detail, ability to build distinctive characters from the inside out and supply them with colorful, memorable dialogue is beyond reproach. As the brothers reminisce about their physically abusive father, their words speak volumes. Toby: "Fighting made the beatings last longer." Tanner: "That's why I stopped fighting and shot that son of a bitch."

As they point, shoot, rob and flee, two Texas rangers trail them. The old but wise Marcus Hamilton (Jeff Bridges) and his half Native American half Mexican partner Alberto Parker (Gil Birmingham, from the Twilight movie franchise) track the robbers like old bloodhounds hunting down horse thieves. Hamilton's salty mouth rains an incessant stream of verbal, racist barbs at Parker, who hurls his own supply of biting words back at his friend. They're like an old, cranky married couple.

Director David MacKenzie (Starred Up) never steps over the boundaries of brutal hard realism. Though the film may remind some viewers of the Cohen Brother's Fargo, this look at the Wild West is not nearly as eccentric or precious. For 102 minutes you don't have to suspend disbelief, you get to stay in the moment as the brothers' mission grows beyond their control.

As the sane sibling, the bearded Pine plays the lead character very stoically. His determination is on his face and in his piercing blue eyes. Foster seems to relish being the loose cannon who causes problems yet emits a deep love for his brother.

Their acting is only outdone by Jeff Bridges, who milks the cagey old ranger's persona until it's dry. Slow country drawl, thoughtful deliberate phrasing, and acting like arthritis has taken over every part of his body except his trigger finger. As a supporting actor, Gil Birmingham gives Bridges room to work and then sneaks in a line reading that steals scenes. Hamilton after one of his premonitions comes true: "See. White men have intuition." Parker: "Sometimes a blind pig finds truffle."

The Hell or High Water story is so rich it feels like it was taken from a novel or based on real crooks like Bonnie and Clyde or Jesse and Frank James. But it isn't. It's all made up.

This classic, thoughtful, and evocative storytelling lets audiences have a guilty pleasure watching two wretches get payback on a banking system that's ripping off old ladies.