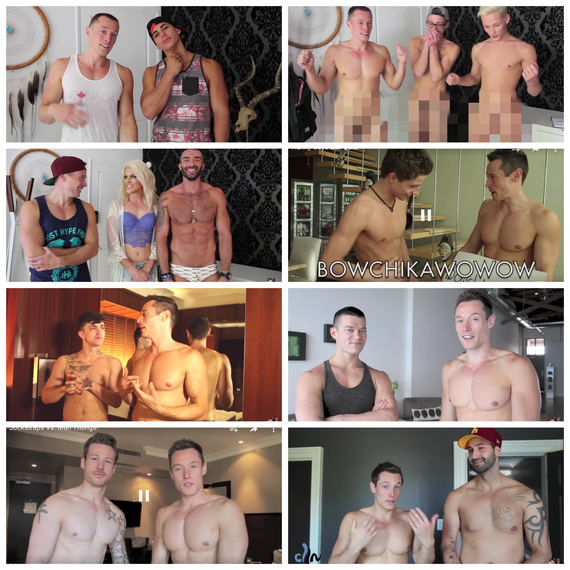 From one Davey (actually, I stopped calling myself that around age 12) to another, hello from the other side of 35. Can we have a long-distance talk about ageism and looksism among gay men?

Yesterday on Twitter, and then several times on Facebook, I saw headlines linking to a new video you made. Being a gay man who occasionally writes about LGBT interests, your moniker, face and Baywatch-ready pectoral projections are not new to me. I've seen countless Davey Wavey videos promoted by countless LGBT sites and blogs over the years, and I've watched a few of them, usually finding myself wondering why.

Towleroad's headline, "Davey Wavey wants you to show some f*cking respect to older gay men -- WATCH," was irresistible for this older gay man, being 37 years old and therefore essentially ghosted by the greater gay community of Washington, D.C. about seven years ago. I admit I was equally intrigued by the topic and the headlined weirdness of someone who calls himself "Davey Wavey" defending older people.

"That creepy old gay man that looks like Santa Claus and the people in his generation are literally -- literally! -- the only reason that you can walk down the street in your pink [bleep] tank top and not get your ass beat," you say. "It is because he fought, and marched, and sweat, and rallied, and stood up so that the world that you live in is better than the world that he grew up in."

Mr. Wavey, please accept my heartfelt appreciation for your words. They are, in my opinion, obvious observations that are too rarely discussed -- despite a relative abundance of LGBT media outlets.

Now can we discuss your actions, and how they undermine those words?

Over the years, I've become accustomed to seeing links to your videos, almost always with screen shots of your unclothed torso, and sometimes more. These are accompanied by such headlines as "How to Gay Cruise," "7 Things You Don't Know About Porn," "Are Virgins Hot?" and "I'm a Boy-Crazy, Teenage Girl..." In the last of these, you are bare chested as usual and you discuss meeting a "really beautiful, blond YouTuber who I've probably masturbated to for, like, the last two years of my life." In case we think you are kidding, you emphasize, "I have masturbated to him." You go on to relate yourself to a teenage girl.

I don't say this to be mean, but all of your videos are as narcissistic as anything offered to the world by any Kardashian, made of paradoxically thoughtless thoughts that orbit around a conventionally attractive face and body. I don't have much of an opinion on the Kardashians, but as everyone loves to talk about the family and do so with resentment, Kim and all the K girls are a useful reference: a lot of women feel that the Kardashian women are diminishing to them by being the very fulcrum of popular culture built upon a foundation of Kim Kardashian's sex tape and Kim Kardashian's stunning facial features and big butt.

The reasons I don't have any opinion of the Kardashians are that 1) they don't have any meaningful influence on my life and 2) as far as I know, they seem to acknowledge and remain within their self-made beauty boxes. If Kim Kardashian has ranted about respecting older women for their bodies and minds, I haven't heard about it; and if she has, she's set herself up for real criticism.

Here I end up straddling a fine line between what is sure to get me lambasted as "prude" and "jealous" and observing some serious hypocrisy.

You claim you are "sex positive" -- and believe it or not, I think such an attitude is a great thing -- but the "sex" you display, consistently and from what I can tell 100 percent without exception -- is limited to a specific Adonis-type of young white male, and this is where, in my view, what you claim is a positive attitude toward sex is actually the very nucleus of the ageism and look-ism you rally -- with words, not actions -- against in your newest viral video.

Comments in response to your body-focused videos, expectedly, always lavish praise on your body. In reviewing your YouTube feed just now, I see that you have occasionally had guests on your show --p orn stars, underwear models, et al. Not one of them, not one, can possibly be over 30 years old. Almost all are unclothed, all are white, and all have similar typically gym-built bodies -- maybe three perfect body fat and breast muscle disproportionate enough to your otherwise slim body to qualify you as a Butterball turkey.

It's worth restating: Every single gay man you present in your videos appears to be under age 30, 35 tops. Every single one conforms to an idealized physical standard. Every single one of them is white. Your rant against young gay men who are cruel to older, less attractive gay men, therefore, can't be considered any more authentic than, say, Hugh Hefner ranting against objectifying women. It doesn't make any actual sense when you think about it.

The older-gay-man "eww" factor against which "Davey Wavey" speaks is caused by the images and ideals that "Davey Wavey" promotes.

So, it's a little curious to see you, Mr. Wavey, celebrated for preaching appreciation of older gay men when, reviewing your videos, one would be led to think that you live in a world in which all gay men are youthful and issued from one of two molds labeled either "twink" or "jock." In my experience, these are the gay molds that come pre-programmed to say "eww" when a gay man (but curiously not straight men) over 30 dare to breathe the same air they do.

You see yourself as a "boy-crazy teenage girl," but you are actually a 31 year-old gay man. Trust me, by age 35, boy-crazy gay man-boys will make it known to you that "you can't sit with us."

Mr. Wavey -- may I call you Davey? -- I don't think that you can in good faith claim that you are known to the Gay Internet for any reason beyond your presentation of your own idealized body and those of your youthful, white, gym-built guests. Having spent about an hour reviewing your videos, it appears that nearly all exist solely to show your breasts in motion. There's nothing anymore "wrong" about this than there is about Pam Anderson running in slow-mo on a Baywatch beach... except that Pam Anderson understands her self-defined role and her influence, and she probably understands that if she suddenly tried to present herself as a Gloria Steinem type, she'd be booed off the stage by people who actually get Gloria Steinem.

Davey, a question for you to think about: What is it about older gay men that young gay men resist? Just one thing: they don't look the way we are now programmed to think a "good gay" looks -- which is to say, like you and the guys you have on camera with you. You're welcome to retaliate and call me jealous, ugly... even old. Go for it. I can take it; trust me, after entering my third decade and living with a chronic illness that has made it impossible for me to maintain abs of steel and pecs of plastic, I'm quite accustomed by now to criticism from other gay men -- which, it has to be said, is meaner than the meanest scene from Mean Girls. I've been told by young gay men online that I should have killed myself after 30 -- young, white, worked out gay men who see me and say or think "eww, die."

We can take this particular message of yours to heart.

But if we do, I'd ask you to consider the fullness of what you present to the world. Is it possible (It is, but can you admit it?) that your videos to date have fueled the very diminishing and entirely superficial, appearances- and conformity-based attitude toward older gay men that you criticize? As you saunter in your skivvies, 22-year-old porn stars at your side, into your third decade of life, you're only going to notice more and more how your current body worshippers and your model friends judge older and less-perfect-looking men because at some point you will be one of those men. You're going to have to let some the anger go at some point because gay-on-older-gay verbal violence is a reality -- and it's a reality you've helped to create.

Not because I am sex-negative, but because I think it would be useful for you to start exploring aspects of life beyond the skin and muscle covering, might I suggest you put on a shirt and continue to observe what gay men really value, and whether your contributions to the LGBT community are really promoting healthy attitudes toward sex or a basis for condemning attitudes toward people who don't look like you and your on-camera friends.

Hello, it's me
I was wondering if after all these years you'd like to meet
To go over everything
They say that time's supposed to heal ya
But I ain't done much healing

You won't do much healing, Davey, if you try to sustain a livelihood based on being pretty and naked and cavorting with pretty, naked young men.

From one Davey to another, all the way from the other side of 35 (there's not such a distance between us; just a million miles of experience), now that you've begun to see the cruelty promulgated by young gay men against older gay men, think about what you're doing, not just saying, and maybe show us that what's inside is worth revealing as much as what's on the surface.

A David, formerly known as Davey