In 21st century America, starting a conversation with a stranger is downright suspect. Making eye contact is awkward. It's best to look busy by engaging with the little screens we carry.

President Obama wants to launch a new spirit of service and community. But how is that possible when making the simplest human connection has become so hard for us? We're more connected, but less connected. It's easier than ever to go through life avoiding actual contact with strangers and neighbors - the very people we need to engage if we're going to rebuild a sense of community.

In an unprecedented blitz against social awkwardness, Meetup.com and The Huffington Post have decided to hand out half a million name tags to the crowd at Inauguration. The name tags read "Hello, My Fellow American, My Name Is..." and attendees are to write-in their name, where they're from, slap it on their coat in the cold, and have some conversations with Fellow Americans.

In doing so, we want to turn a crowd into a community. We all need a little reminder that we're not just spectators and that Inauguration isn't just for celebrities. We can look at each other, and not just at the Jumbotrons. As Obama says, "We're the ones we've been waiting for." 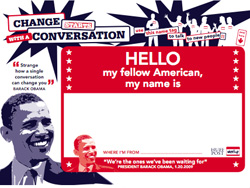 There's magic in the Hello, and the humble name tag functions as a kind of permission to connect in a suspicious world. We've seen that magic in over a million Meetups. People use the internet (Meetup.com) to get off the internet and organize community around something important to them - whether that's getting advice in running a small business or fighting for gay rights or supporting each other through health struggles.

To show up at a Meetup and meet a group of strangers is much more awkward than joining the online version of that community on Facebook. But it opens up possibilities for deeper connection and more powerful community that are not possible online.

There are rare moments, like in the days after 9/11, or perhaps this Inauguration, when we get a glimpse of real community and shared purpose. We look to each other. At Inauguration, we're hoping the name tags spark thousands of new conversations and connections.

But what about building real community and a spirit of service that endures? How can tens of millions of Americans answer Obama's call?

Too much of the talk we're hearing about service and community at this time is narrowly defined, bland or simply not far-reaching or visionary enough to bring about the real cultural change so many of us sense is possible at this remarkable historical moment.

Starting a support group around personal finances in difficult times is service. (Example: this )

Participating in a babysitting collective is service.

Self-organizing with strangers to improve your school or town is service.

Imagine millions of these little beacons of community and how they might change our culture. Now that we've elected a Community Organizer In Chief, we can become a nation of community organizers.

It all starts by saying "Hello."

Download a name tag here to use at your own Inauguration celebration.

Co-Founder and advisor of Meetup.com