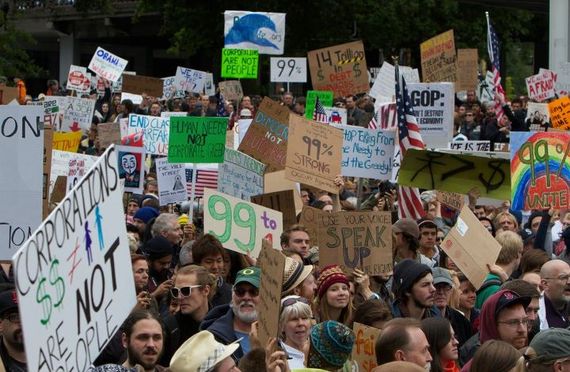 As perhaps never before in our history, all the pieces are in place for a democracy movement to take off in America, one strong enough to tackle the system-roots of our country's crises.

I understand, because it is really hard to discern the democratic impulse in a political culture increasingly dominated by bluster, bullying, and blame, all bank-rolled by a tiny minority.

But here's all I ask -- that you take in the six key pieces below, and then imagine what they could add up to, and your place in them.

One: We're angry. Not handfuls of marginal "activists" but most Americans -- left, right, middle -- are really pissed. We know things are foundationally unfair, and getting worse -- in just the first three years after the '08 Wall St. crash, 91 percent of all income gains went to the top 1 percent. So today the 20 richest Americans hold as much wealth as the bottom half of our entire population. Twenty people? Please let this sink in. In the Manhattan coffee shop where I sit, that's the number in easy view. Incredible.

Two: We now know the system is rigged. We know that those making the rules in Washington and our state houses make them in the service of those who fund them, not the vast majority of us. Out of 120 million American households, just 158 families contributed nearly half the money in the early stage of the 2016 presidential election. No wonder 84 percent of American adults believe that money has too much influence in politics. We feel evicted from our home -- democracy itself

Three: We're finally connecting the dots. More and more of us grasp that whether the outrage most afflicting us, or moving us, is hunger and homelessness, racism in all its forms, roadblocks to unions, an unjust justice system, crippling student debt, unaffordable housing, assault on voting rights, our climate catastrophe, or a maddening healthcare system, we see that without democracy we're stuck. Our inability to solve any of these problems -- for which solutions are already known -- comes back to one thing: the growing democracy deficit as the voices of regular citizens are drowned out by the megaphones of great wealth.

Four: We agree on solutions. Fully 85 percent of us want deep change or a complete "rebuild" of our campaign finance system. Almost two-thirds of us want "citizen-funded" elections and 80 percent oppose secret or "dark" money in political contests. And 78 percent of us want the Citizens United ruling overturned. I for one can't recall such widespread agreement across party and generational lines, ever.

Plus, another great thing: Most of the solutions favored by so many Americans today are already proven to work. They include at least these five elements:

Five: We're uniting across old divides. Did you ever imagine environmental, civil rights, and labor activists all organizing toward common goals? Likely not. Yet, recently 131 organizations came together to create a Unity Statement of Principles on solutions to the undue influence of money in politics. And two years ago six huge but very different groups -- the Sierra Club, NAACP, Greenpeace, AFL-CIO, the Communications Workers of America, and Common Cause -- created a coalition called Democracy Initiative to press forward essential democratic system-reforms. It helped lead the 2015 thousand-mile march for voting rights restoration. Now roughly fifty issue organizations are on board.

Plus, thought-leaders from both left and right are standing up for democracy. Robert Reich, who most recently wrote Saving Capitalism for the Many Not the Few, is a powerful progressive voice. Law professor Richard W. Painter made the "Conservative Case for Campaign Finance Reform" in the New York Times last month. And Tea Party strategist John Pudner now leads Take Back Our Republic, an organization building conservative support for reducing the influence of private wealth in politics. 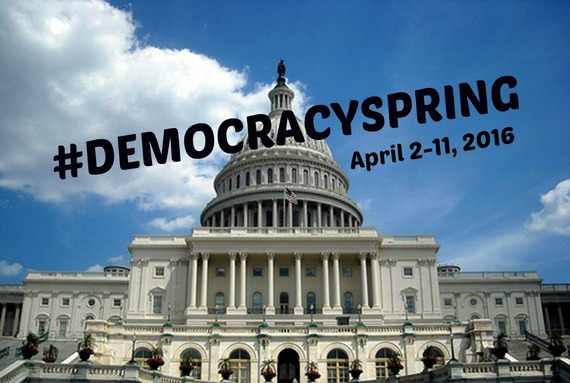 Six: A massive and savvy citizens' movement is taking off. We've learned a lot since the Occupy Movement focused hearts and minds on the inequality crisis. The movement now arising is organized, goal oriented, and amazingly unified. So, this April, get ready to join in two of its unprecedented public actions.

First is Democracy Spring. Launched last fall by 99Rise and Avaaz, it now has one hundred organizational backers, including the Small Planet Institute. Demanding fundamental electoral reform for citizen-funded elections, voting rights protection, and beginning the process of amending the constitution, its march begins April 2nd at the Liberty Bell in Philly and travels to the steps of the capitol on the 11th. There, 2,000 have already pledged to risk arrest if Congress does not act on its demands.

Starting on the 16th, a broad coalition, Democracy Awakening, takes up the torch! A series of public actions include a march, teach-ins, a concert, a human circle around the capitol, and visits to legislators to press the case for democracy in America. Already about 200 organizations, including mine, are official endorsers.

These mobilizations are enabled by strong communications across issue lines and really savvy use of social media. They are intergenerational, with a spirit appreciative of diversity of views. All this looks, feels, talks, and walks like what could be an historic citizens' movement.

Surely, you would not want to miss out!

On the sites linked above and at our Field Guide to Getting-Money-Out of-Politics Movement you'll find groups eager for your enthusiastic engagement. There are so many ways to jump in: Join or start a campus group through Democracy Matters or get in through your faith community through DemocraticFaith.com. Ask teachers and students you know to bring the debate on the shape of our democracy into their classrooms. Sign up to help register voters and to get out the vote this election year!

To seize this moment in which six essential pieces are now in place, there is, though, one still-needed ingredient I've yet to mention: the catalytic agent bringing all this to life.

Some might say that ingredient is greater compassion, but I sense that human hearts are good enough. Since our species is so deeply social, what's even tougher to come by is courage--the courage to break with the pack and take a stand.

True, the deeply human need for inclusion and camaraderie can be increasingly met within the growing throngs of gutsy people who've gotten the democracy movement this far, but we still need guts to speak up and act up.

So let's help each other be heroes. Often, it only takes one gutsy soul to trigger a cascade. And, as we show up, I think we'll discover that the surging, solutions-oriented democracy movement is a whole lot more fun than either ranting or moping. It's truly stirring, and it's changing my life.

See you in April?