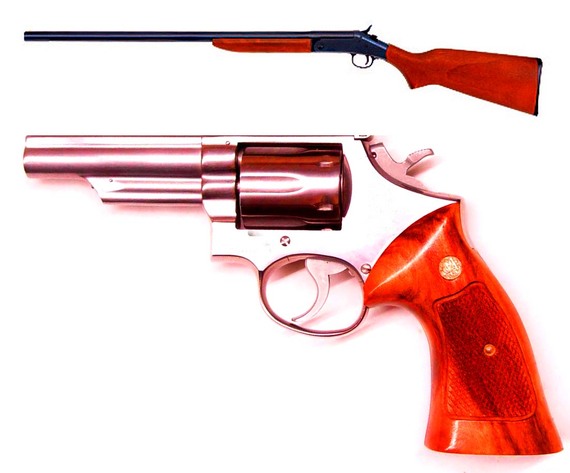 I used to own two guns like these when I was younger. I know how gun owners feel about their guns because I've known a lot of them, and most have been rational, educated and caring people, many with school-aged kids. So, why haven't these gun owners been moved enough by the killings of school children to join efforts to stop the carnage?

Ultra right-wing gun owners who toe the NRA party line will take no action to stop the shootings, yet we keep expecting they'll eventually come around and become sensible. Each time there is a school shooting, the NRA circles their wagons and prepares their routine second amendment press materials to respond to the outrage. What they're saying, and not so indirectly, is that these deaths are the unfortunate cost of doing business for an America that must defend itself, that their guns have an important role in keeping citizens safe.

The reality is that gun lovers just love playing with their guns and see the killings as something that doesn't involve them. Guns are their recreation, their hobby, and they're not killing anyone. The NRA is simply the defender of the toys, not the nation.

Some of what hardliners say is true. Guns in and of themselves don't kill and the majority of gun owners would never kill anyone, just as cars don't kill people, drunks do. But guns are involved in these school shootings just as automobiles are when a drunk driver mows down a sidewalk full of people. The difference is that there are rules about drunks driving cars to keep Americans safer, but there are few rules regulating guns thanks to the NRA's hard-line policy of "give em an inch and they'll take a mile." Tough luck about those kids...

But what about moderate gun owners, those reasonable people who are horrified that these kids are being killed and would be willing to come to the table to curb the deaths? If gun ownership mirrors political parties, then hardline extremists are not at all the majority; they're on the fringes. So, where are these multitudes of middle-of-the-road gun owners?

I believe the reason we haven't heard from them is because gun ownership is a one-party system; owners have no one to turn to except the powerful NRA. There needs to exist a politically moderate gun association to sweep the NRA out of the way and organize the scattered millions of levelheaded gun owners, sensible individuals who enjoy owning a gun but loathe that they're used to shoot up schools, people of conscience who believe that kids dying every year is just not a price they're willing to pay.