From the majestic elephants in Africa to the tigers in South East Asia, much has been said about the mass extinctions of life on earth due to human activities. Many of these are expected to come from Southeast Asian countries where the rush to achieve developed nation status has dealt a heavy hand to nature.

Loss of habitat to feed human needs for virgin paper and cheap vegetable oils in countries like Indonesia is one of the major drivers for wildlife extinction is this rich tropical landscape. As one of the hottest spots for biodiversity on planet Earth, Indonesia continues to try and find the balance between conservation and development. An added pressure on its wildlife however, comes not from the desire for clean white paper or cheap palm oil, but an insatiable demand for trinkets to show one's monetary status in countries like China.

Meet one such victim of the trinket trade, the Helmeted Hornbill

Prized for its ivory like skull or casque, a recent report from Environmental Investigations Agency reveals it as the latest victim of the ivory trade, red ivory from Helmeted Hornbills. Earlier reports from friends of mine in Borneo had already indicated that there was a busy trade in hornbill parts. All of them reported the presence of traders ready and willing to buy the hornbill's casque, especially that from the Helmeted Hornbill.

I had the honor to recently interview conservationist and hornbill expert Yokyok "Yoki" Hadiprakarsa from the Indonesian Hornbill Conservation Society on the plight of Indonesian hornbills.

Q. What is a hornbill and why is the Helmeted species being targeted for the ivory trade?

Hornbill is the largest and most effective seed disperser agent in Asia's tropical rainforests and they are forest dependent. Among Asian hornbills, the Helmeted hornbill is the most unique species starting from species life requirement and features a solid casque that has been recognized for its ivory-like quality. It is the only Hornbill in the world who has this feature. With elephant ivory becoming more expensive and scarce in the market, now the traders are looking for an alternative ivory to satisfy the demand for trinkets to show off their wealth.

Indonesia is home to thirteen hornbill species, three of which are endemic. This makes Indonesia the richest and the most important country for hornbill conservation in the world.

Wildlife crime in Kalimantan has been overlooked by most conservation NGOs who focus primarily in the areas where celebrity species such as orangutan are found.

Q. Can you share the findings from your study on hornbills in 2013?

The increased confiscations of Helmeted hornbill was a great concern to me so in early 2013,with the support of Chester Zoo Conservation and Research Funding Support, I started my investigation project in West Kalimantan together with TITIAN Foundation, a local conservation NGO. We conducted the investigation in five districts in West Kalimantan, including the capital city of Pontianak.

My worries about the status of the Helmet hornbill was justified. From 2012 to 2013 the hunting of Helmeted hornbills saw a staggering increase. Traders offering high prices regularly visited many remote villages in the jungles. The hunters shoot the birds mostly with traditional hand-made guns, which still commonly found in remote villages in West Kalimantan. However there is one case where the hunters reportedly used semi-automatic rifle AK-47 that was rented from local police officers.

In 2013 about 500 adults Helmeted Hornbills were killed each month, or some 6,000 birds in one year, and that's only in West Kalimantan! However, only 1,111 Helmeted Hornbill heads were confiscated by the Indonesian authorities between 2012 and 2014 and eight nationals from China were arrested along with two Indonesian citizens. How many more shipments went undetected? We will never know but the confiscations of wildlife parts usually represent a small percentage of the overall trade volume. 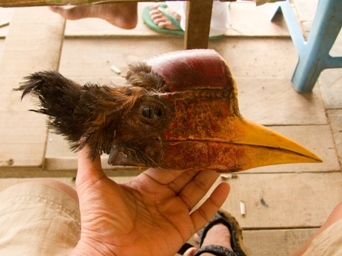 Q. How likely is it for the Helmeted Hornbill to become extinct in Indonesia?

Combination of habitat loss, massive poaching and lack of law enforcement are deadly recipes for the Helmeted hornbill extinction in Indonesia which sadly will become a reality, if we don't do anything.

Q. What are the biggest problems facing the survival of this species in Indonesia?

The largest habitat and population of the Helmeted hornbill in the world is in Indonesia. However, the forests which are their main habitat has been shrinking rapidly. Currently, 1.2 million hectares of Indonesia forest is disappearing each year, mostly for plantation and natural resources extraction. This situation is worsening with poor land-use planning at any level. At the same time, increased demand of Helmeted hornbill beak for red ivory market is boosting poaching in the remaining habitats for Helmeted hornbills in Indonesia, Since hornbills are not a "Celebrities species" that can easily attract huge conservation funding, conducting conservation actions for these species will be a challenge.

Q. What, if any, are the solutions, how do you stop the poachers?

There is a success story in Thailand where the poachers were converted into hornbill watchers and guides for tourists. This may be one of the solutions, but the most important part is basically strengthening the basic livelihoods of the communities in the forests. Poor people will do whatever it takes to make a living. The sale of one hornbill can provide enough cash to feed a family for a month

Q. The hornbills are protected by law in Indonesia, what, in your opinion, can the government do to stem this trade?

In Indonesia, all hornbill species are protected by law and listed as country top 10 species conservation priority for bird groups. The Helmeted hornbill is one species that needs immediate conservation actions. Like any others threatened species in Indonesia, better wildlife habitat management and enforcement of the law is a key action that the government should do. From habitat management perspectives for landscape species like hornbills, government should start thinking about species conservation beyond the boundaries of conservation areas. Involvement of multi-stakeholder approaches is also urgently needed in changing landscapes of hornbill habitat. This includes the enforcement of our national laws for any wildlife poachers.

Q. Your study in 2013 revealed the trade routes used to smuggle hornbill parts out of Indonesia, if funding was available, what actions would you take to shut down these trade routes?

Conducting massive international campaigns in demand markets like China, is one important action to raise their awareness to stop buying red ivory for conservations sake. From Indonesia's national actions, intensive awareness campaigns are needed to inform all Indonesians of the need to stop hunting the hornbills to extinction. The Indonesian authorities including customs officials, police and the attorney general's office also need to clamp down on the poaching of wildlife in Indonesia.

Yoki's studies on the Helmeted hornbills in Kalimantan are on going. For further information, he can be contacted via email : yhadiprakarsa [at] gmail.com