If the recently-discovered iPhone security flaw is freaking you out (it should), you'll want to do everything you can to protect yourself. The flaw could allow hackers to access your emails and other private communications.

Apple released a security update for the most-recent version of iOS for iPhone 4 and later, 5th-generation iPod touches, and iPad 2 and later, and it's easy to get. All you have to do is go into "Settings," then scroll down to "General." After you hit "General," hit "Software Update." There you'll get the option to download to a software update. Here's what that looks like: 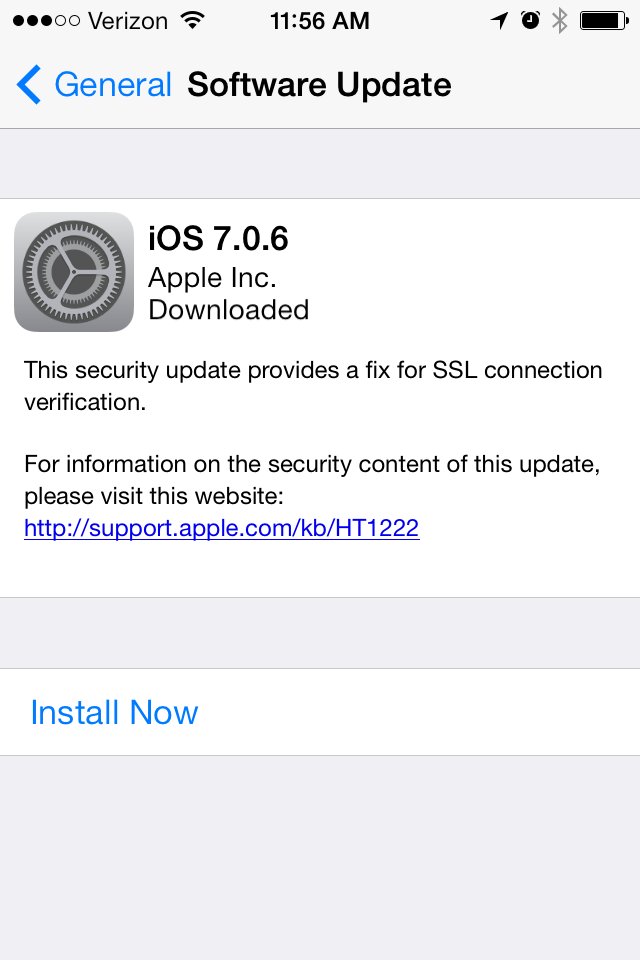 If your iPhone is too full to download the update, you'll have to delete some photos, videos, music or apps. It's important to download this update, so you'll want to take some time to free up space for it.

Once the update downloads your device will turn off and turn back on, and you'll be all set.

"Secure Transport failed to validate the authenticity of the connection," Apple writes on its support site. "This issue was addressed by restoring missing validation steps."

How To Save Yourself From That Nasty iPhone Bug
7 Apps To Prevent Phone Surveillance
1 / 7
Silent Circle
<a href="https://silentcircle.com/web/how-it-works/" target="_blank">Silent Circle's "Silent Suite"</a> for iPhone and Android encrypts phone calls, files, texts, emails and video recordings, and can be set to erase them all from a sender's device within minutes of sending. When the app hit the market in October of last year, Slate said the product "<a href="http://www.slate.com/articles/technology/future_tense/2012/10/silent_circle_mike_janke_s_iphone_app_makes_encryption_easy_governments.single.html" target="_blank">has governments nervous</a>."
Silent Circle