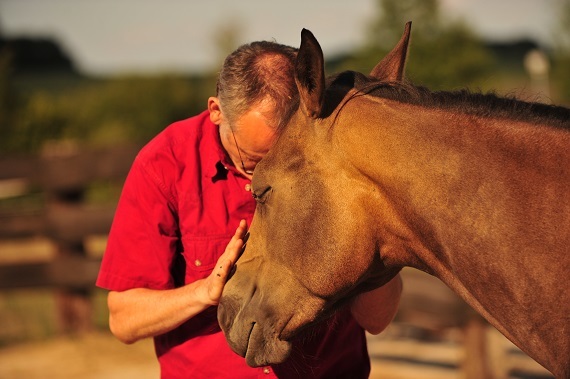 Horses enjoy our presence most when we are in the "Here and Now".
(photo by Thierry Fulconis)

At the age of 15, I believed I was going to die. After recently learning about breast cancer and how to conduct a self-exam at-home, I thought that I'd give it a try. It was a strange sensation to discover a lump that wasn't there some months before. From what I had learned, women could develop fatty tumors, but when the lump didn't seem to move around freely, I knew that something was wrong.

At the doctor's office, it took about 15 minutes before she took my father aside and told him that I needed to be scheduled for immediate surgery. There was no discussion of conducting an X-ray, ultrasound, or even biopsy, just surgery. The chances of the tumor being cancerous were pretty high as the disease runs in my family. And even though they told me not to worry, and that everything would be ok, the look on my dad's face that day told me everything they were afraid to say and all that I needed to know.

The surgery was schedule for roughly two weeks later, and every day up until then, I cried. Each night I would tell my dad that I loved him, and made him promise to take care of our Alaskan Malamute, Sasha, and not to feed her too many turkey legs. I told him of all the things I wouldn't live to see and do, as well as my list of regrets. Together we would say the Lord's Prayer, Psalm 23, and he would sing to me until I feel asleep. My dad would wait awhile by my bedside, and after leaving my room and heading to his own, he would often feel defeated.

I am now 29 years old, and living a strong and healthy life. The tumor had been benign, but from the day we found out, our lifestyle changed. All of the foods with hormones were immediately thrown out, and were replaced by organic. Any later medications that I consumed would have to be entirely without or with the lowest possible levels of estrogen. These were just the tangible effects of my ordeal, but the psychological ones that I wasn't immediately aware of would have a far longer lasting impression.

Up until that time I had been an avid soccer player and a member of a private club team in Westchester. But after the surgery I begin to lose interest. I would make up excuses as to why I didn't want to go, and eventually I gave up and quit. Out of genuine concern, my dad took me to see a psychologist, a practice that I would unknowingly continue over the next 10 years. Initially it felt odd to sit and talk to a stranger about my feelings and deepest fears, but over time I realized that it was comforting to have a non-family member listen to me, unbiased and nonjudgmental, and try to help me confront my suppressed anxieties that were manifesting in different ways and undoubtedly affecting the quality of my life. Looking back on it now, during those sessions I was always holding onto something, like a pen or a pillow, and doing so gave me the sense of not being entirely exposed. And each time after those sessions ended, when I came home, just being with my dog or cat would reassuringly give me a sense of unrequited peace. If I had known then that there were ways to incorporate animals into my counseling sessions, I know I would have tried it, but it was only recently that I discovered Equine Facilitated Experiential Learning (EFEL).

Inspired by the teachings of Linda Kohanov and after having come to a cross-road in her life, Ines Kaiser took out a map and randomly picked Luxembourg as the next place to move to in hopes of starting her own business. Ines had tried EFEL after experiencing some difficulties in her life, and understanding the benefits, wanted to offer the same opportunity to others in search of finding themselves and something more out of life.

Relaxing together in the pasture (photo by Thierry Fulconis)

Initially EFEL began with the idea of connecting humans and horses in different ways. For centuries humans have had a dependent relationship with horses and over time that relationship has frequently been one sided. Horses were used as a means for transportation, during war, exploration, survival of everyday life, and humans rarely asked what was the desire and needs of the horse. Horses were critical to human survival and evolution, and the thought to ask the horse if they were willing to assist was never taken into consideration, and instead often times they were brutally forced to oblige. In the later years horses were used by the super-rich for prestige and sport, which greatly served the interest of their owners but more times than not, neglected the interests of the horse. In recent decades, more ethical training methods and horsemanship have developed, but the idea remained that the human taught the horse and not the other way around. However, nowadays, we have arrived at an era where this way of thinking deserves to be questioned, and the intelligence of horses should be deeply considered. 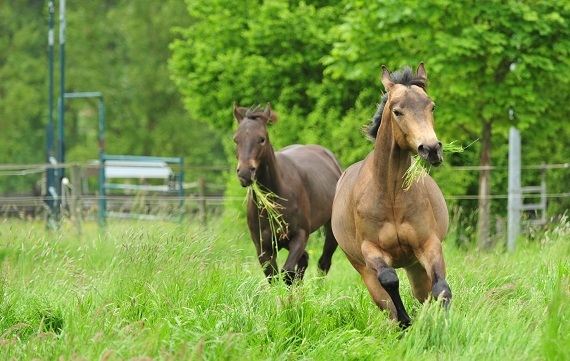 Horses are prey animals that live in herds and love being in the pasture.
(photo by Thierry Fulconis)

Ines began establishing her clientele in 2012, but launched her business, Grace.lu, full time in 2013. She has six horses -- Mylie (21 yrs.), Sue (8 yrs.), Grace (7 yrs.), Centu (6 yrs.), Sky (4 yrs.), Bella (3 yrs.) -- five of whom she trains with. The clients who come to her are battling with a range of issues such as burnout, depression, anorexia, anger, fear, mid-life crisis, lifestyle transition, calamitous relationships, divorce, in-between jobs, death of family members, and illness. And whatever the case may be they are looking for a change as their current state no longer feels sustainable and is leading them down a path of unhappiness. In all cases, Ines's clients have managed to suppress their emotions which have resulted from these life altering events, and have come to her to try and rebuild the contact to themselves. And by the time they call to schedule a session, they have already read the information on her website.

"I Invite them to the stables and introduce my approach. I make them experience. When you learn from experience, you remember it differently than something you heard or talked about. When the experience happens on all these nonverbal levels -- body, emotion, mind, energy, and soul -- you can feel it."

Ines's work involves the horse to teach people how to find themselves and reconnect.

"You cannot develop personally if you can't feel yourself or perceive what is going on within you. Through the work that I am doing, the question I like to ask is, "What do the horses have to teach us?" Any interaction that we have with them they are teaching us something. I don't know if they have a direct intention to do so, it could vary from horse to horse, but they communicate very clearly that which we have unlearned."

As Ines perceives it, in today's world the modern human mind is too focused on logical thinking. As a result people have lost contact with their emotions and no longer "feel their bodies". Ines explained that horses are prey animals, and it is in their nature to pick up even the slightest change in their environment. They can feel your heart rate, whether you have high blood pressure, your suppressed emotions, how well you are grounded, and if you are present in the here and now or not. They can feel if you are congruent with your heart. 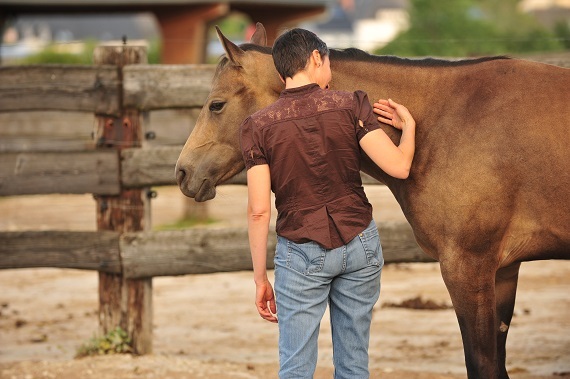 A moment of affection between this woman and horse, Bella.
(photo by Thierry Fulconis)

The Institute of Heart Math has conducted research in the field of heart intelligence. They have been able to determine that there is scientific evidence proving that humans have the same cells in our heart that are also in our brain, and that when we make decisions based on our heart or our gut feelings, that this is more than just a metaphor.

For people who have a strong mental focus it is important to have them try and connect with their body. The body talks to us through these sensations, and as prey animals, horses are able to perceive all of these things and mirror them back to us through their behavior. In order to identify and acknowledge these sensations, one of the first exercises that Ines does with her clients is called a Body Scan. As she explains:

"A Body Scan is a small exercise where you focus your attention inward. You go through all of your body parts and look for any sensations that may stand out. That could be pressure, churning in stomach, tension, posture, a realization that your shoulders are hunched. All of these simple sensations carry information. I ask them 'Which is the sensation that intrigues you the most?', and they always unconsciously choose the right one."

Ines explained that an example of this is when a person is standing and looking at the horse and says "I have a nervous feeling in my stomach." They are to allow this feeling to be and spend a moment observing it. When this is happening, Ines is standing with them and encouraging them. Then she asks them what the message behind this sensation could be and they reply, "I'm afraid because I've never been close to a big animal, I'm afraid of being run over by the horse, and I'm afraid the horse will step on my feet." Continue reading on Petopia's blog, Zoe's Couch