Lynn Spears, Billy Ray Cyrus, and Dina Lohan now look like Parents Of The Year compared to Octo-Mom Nadya Suleman. Those parents may see their offspring as mega money-making machines, but at least they didn't start plotting their children's career trajectories until AFTER
they were born.

Now, we are faced with a woman who I suspect may have planned on her children's bankability even before they were conceived. How else to explain how a single mother of already six young children, with no current means of employment, a recipient of food stamps and child disability payments, and no home of her own, could possibly expect to be providing for the eight new mouths to feed.

I can only imagine that she was counting on cashing in on her new brood with her own reality show to rival "Jon & Kate Plus 8," and her own slew of million dollar cover shoots to rival Brangelina's.

These babies have no other chance to be cared for unless they pay their own way. Suleman claims she is going back to school next fall to earn a master's degree in counseling, but I haven't heard of any million-dollar salaried counselors. And that's what you need, millions, to raise 14 children, especially when one is autistic and some of the new eight could have medical conditions that require special care.

Suleman's own mother has spoken out about her daughter's irresponsibility saying, "The truth is Nadya's not capable of raising 14 children. We're already all living in my humble three-bedroom home, and it's really pretty crowded."

The grandmother has already been paying the cost of food, clothing, and other expenses for the first six of Suleman's children. However, she is throwing up her hands at the prospect of taking care of the new eight.

Suleman apparently also did not tell her own mother that she was awarded $165,000 in a work settlement. Could that be because she may have spent the money on inflating her lips and undergoing other plastic surgery in an attempt to be an Angelina lookalike? I'm not a doctor, so I can only guess, but her face looks highly suspicious.

If she did spend the money that she never told her own mother about on plastic surgery, then it's another indication that this woman of this woman's self-centeredness. She has already publicly confessed to having multiple babies in order to fulfill her own neediness for family after being raised as an only child.

I believe she's also fulfilling a need to be an Angelina-like celebrity and to make her fame and fortune off her innocent children. It must be like a dream come true already to be interviewed by Ann Curry on the "Today" show since Ann is one of Jolie's favorite interviewers. Where is the California Department of Social Services? And where is lawyer and child advocate Gloria Allred when you need her? Gloria was all incensed when Michael Jackson dangled his youngest child over a balcony in Germany when he was an infant. Shouldn't Gloria be as upset about a woman deliberately conceiving eight mouths to feed when she can't feed them? Furthermore, aren't these babies being put at risk of serious neglect?

Think about it. How is Suleman just going to be able to feed eight babies all day, all night? How will she have time to hold each baby enough to give it a sense of being loved and cared for? As a mom of four myself, I know that every baby needs to be held a lot. Anybody who's had even twins knows it's incredibly exhausting and demanding just to take care of two, let alone eight.

Then, consider, how do you ever transport them to doctor's appointments, how do you get your other six children up and ready for school and help them with their homework? How do you bathe them all, and make sure that they don't hurt themselves? Every mother knows you
have to have eyes in the back of your head to ensure safety of a baby or young child. How does a single mom watch all eight, let alone 14?

Suleman has told Ann Curry on the "Today" show that she believes that her family, friends, and church will somehow help her out. Well, we already know her mother's feelings on that matter. Is she just as delusional about the others? Who does she expect to do the heavy-lifting of raising these children?

There is a famous case of quintuplets born in Canada during the 1930s--the Dionne quintuplets. At that time, quintuplets were a huge novelty. They were taken away from their low-income parents by the government of Canada, supposedly so they could be raised properly. Instead, they were treated throughout their childhood like a tourist attraction. And in fact, they were often on public view. When the girls grew up, they complained bitterly about their exploitation. 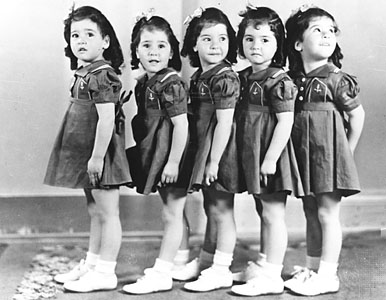 Pray for the safe future of these little octobabies!