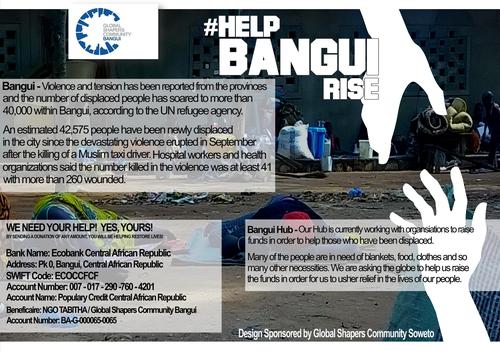 On October 1st, the United Nations Refugee Agency (UNHCR) reported that the estimated number of displaced people in Bangui was 42,575 following the devastating violence that erupted on Saturday, September 26th 2015 after the killing of a Muslim taxi driver.

In an attempt to help draw support for internally displaced persons (IDPs) in Bangui, the capital city of Central African Republic, the Bangui Hub of the Global Shapers Community with support from a local NGO, TABITHA, started a campaign called #HelpBanguiRise.

In the spirit of collaboration, which is one of the hallmarks of the World Economic Forum, the Global Shapers Community in Africa has pledged its support to #HelpBanguiRise in a bid to a support its sister hub in Bangui in this time of need. The Global Shapers Community is an initiative of the World Economic Forum; it's a global network of hubs developed and led by young people between 20-29 years of age, who are exceptional in their potential, their achievement and their drive to make a contribution to their communities.

Bangui, as it Happened...

Tanguy Dameyo, Curator of the Bangui Hub and father of two children resident at Beaver camps in the 5th arrondissement gave me a first-hand account of happenings and also shares why it is important for the world to do something about the current situation in the Central African Republic's capital city. Hear Tanguy:

"As of September 26 and to date, Bangui was once again plunged into chaos and crisis, after the discovery of the body of a young Muslim motorcycle taxi driver in the 8th Arrondissement of Bangui.
Violence ensued, and gun shots could be heard around the PK5 Muslim neighbourhood resulting in citizens, man women and children, young and old, myself included, fleeing out homes with our families. The UNHCR puts the figures of displaced people at over 40,000.

We sleep under the stars, we sleep on the floor without mats or blankets, we sleep without shelter. This is especially difficult given that it is currently the rainy season. Some women are forced to remain standing all night to protect their children from the rain. We fear the situation is deteriorating; as such the Global Shapers Community - Bangui Hub lunched an initiative to crowdsource for financial support to come to the help of the Community.

We are requesting for emergency humanitarian aid that is needed to save the lives of women, children and the elderly." 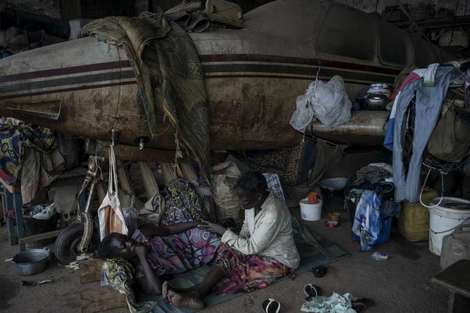 (Displaced women find shelter from rain at the M'poko IDPs site close to the international airport in Bangui, Courtesy: UNHCR)

By sending a donation of any amount you'll be helping to restore lives.

Pass the word around, and thank you for your interest in the humanitarian crises in Central Africa, precisely in Bangui. Together we can #HelpBanguiRise.