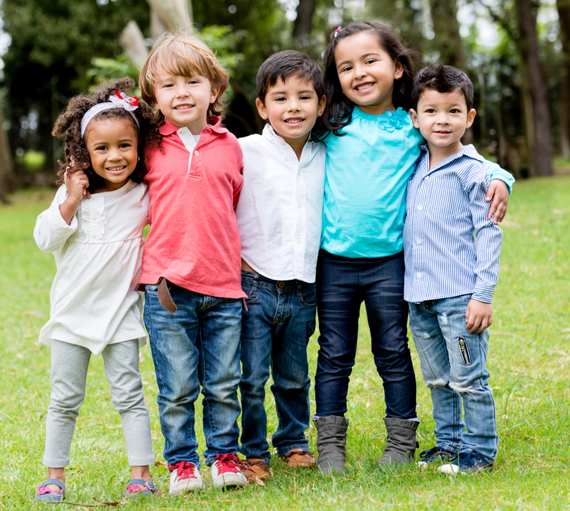 Michelle's mother realized she's transgender one night while consoling her after a panic attack. She said Michelle began getting really bad panic attacks before bed when she was 10 years old. On this one particular night while rocking her in her arms, Michelle asked her a question. Not raising her in a particular religion, she was shocked at what she asked.

Michelle had heard about reincarnation and was asking her mom that if she died, would she have to come back again in a boy's body. If so, she couldn't do it again. It wasn't something she'd be able to handle.

The very next day Michelle's mother Googled, "I think my child is transgender," and continued to share their journey of her transition to a class of 7th graders during a PFLAG panel I was part of last week.

While she was sharing Michelle's story, I looked around the room and saw 20 kids (12 years old), listening. They listened with intent and they heard everything she said.

I was amazed at the questions they asked, the insight they had, and the experiences they shared from their own lives.

One girl shared how she's liked wearing boys clothes ever since she can remember. So when her grandfather, who always asks why she wears boys clothes, gave her a blouse for her birthday, told us how it made her feel sad. She wondered how someone who knew her so well would purposefully get her something he knew she wouldn't like.

That same little girl told us how just the other day while shopping in the boys section for a shirt to wear to a friend's Bar Mitzvah, was told by a sales lady she was in the wrong section. The little girl wanted to know our advice on what she could've done. She said, "I knew I was in the right section, but based on the sales lady's reaction, I didn't know how to respond. I just let her walk me to the section she thought I belonged."

Michelle's mother, who shared one of the most moving stories I've had the privilege hearing, was able to answer the little girl's question in the most heartfelt way. She told the entire class she was there to share with them her daughter's experience.

She began to tell them how when she gave birth and the doctor told her it was a boy, she chose a typical boy's name. She didn't know much about gender and sexuality, but knew something was going on with her child at a very young age.

Ever since Michelle could walk, she always wanted to play with girls toys. She would even wear dolls' clothes and loved anything to do with princesses. When she was 5 or 6, Michelle wanted to dress as a princess for Halloween two years in a row. In their house toys didn't have gender restrictions, so it wasn't much of a concern.

It wasn't until Michelle started kindergarten her mom really began to pay attention. Like a lot of stay-at-home moms I know, she volunteered at her daughter's school and noticed how different Michelle acted in class from when they were at home. The thing she noticed most was how Michelle began to lie. She would lie about the toys she liked and what games she wanted to play at school.

She appeared to observe the little boys and try to model her behavior by what they did, not what she knew Michelle to naturally do.

My eyes welled up with tears when she described a memory of Michelle's kindergarten teacher asking her about her favorite color. She knew her favorite color was violet, so when she overheard Michelle say it was the same color as the boys who answered, she couldn't believe she had lied.

Most of us don't realize how insightful children really are. Not only are they aware of their surroundings, they're so aware they'll even begin to pretend to be someone they're not, just to fit in.

One of the biggest reasons I hear from parents why they don't discuss gender and sexuality with their children is, "they're too young to understand." What I hear with that response is, "it's not something I understand or am comfortable speaking with them about."

Children will learn anything we teach them.

I told him how grateful I was for his question and for the entire class. I let them know it's through their questions and the information they learned they'll be able to help challenge stereotypes and be allies for the LGBT community.

I also saw how it really is true that children will learn anything we teach them. They can learn acceptance just as easily as intolerance. All it requires is the space to have the conversations and a willingness to be open.