Years ago my wife and I volunteered at a homeless shelter in downtown Los Angeles, passing out sandwiches and preparing meals for thousands of people on Skid Row. I got to talking with one of the guys in line, Albert. He was tall and skinny with bright blue eyes, a weathered face, and a warm smile. He asked me where I was from and when I said "West LA," he said, "Me too!" enjoying the irony. He said he liked my socks. I'd worn the candy cane socks my wife gave me. "Want to see mine?" he said, lifting his leg. He was barefoot. He said he's been meaning to pick up a pair but hadn't gotten around to it. I felt a sinking feeling in my stomach.

A few days later I was home and helping to dress my twin baby daughters. A friend had given them pink knitted socks. I smiled when I slid them over their miniature toes and feet. At that moment, Albert flashed in my mind. There I was in a nice warm house, surrounded by people I love and who love me. In contrast, Albert was out there barefoot somewhere, scrounging up money for his next pair of socks, maybe putting the five dollars toward a meal instead. What a stark contrast. I couldn't stop thinking about it. I can get a bit teary-eyed over these sorts of things. (Yes, I cried when Mufasa died in Disney's Lion King).

The next day, after work, I stopped at Ross and filled up a cart with crew socks -- about $100 worth -- nothing fancy, just white cotton men's socks. I stuffed my trunk with them. 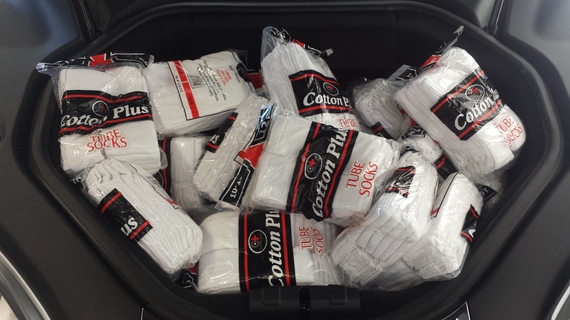 I work out almost every day of the week as part of my training as a competitive masters rower (I used to row in college). That next morning, I set my alarm a little earlier than usual -- for 5 a.m. -- and drove over to the Santa Monica's Palisades Park, a small narrow strip of green, perched on the bluff over Pacific Coast Highway and the beach. Palisades Park is popular for joggers, yoga groups, and tourists -- and a common overnight-destination for West LA homeless individuals.

I grabbed one of the bags from my trunk and started across the damp grass. It was dark out since the sun was still sleeping. It's a beautiful feeling to be up before the sun and most living things. It's so still out there absent the thousands of distractions that plague daytime. Your senses pick up things that otherwise get drowned out by the city. It's simply a beautiful slice to savor. The frigid wind was blowing that morning and below I could just barely make out whitecaps on the Pacific Ocean. I was underdressed -- wearing workout shorts and a long sleeve shirt -- but "Hey," I thought to myself, "At least I've got plenty of socks."

I headed for a group of three men, gathered around a tree, probably using it as a windbreaker. Two were asleep under heavy blankets, and the third was digging through his shopping cart. It was loaded down with plastic bottles and some clothes, a broom, and a few books -- most likely, everything he owned in this world. As I walked toward him, he turned and watched me, perhaps questioning my motives.

"I thought you guys might need some fresh new socks," I told him, handing him a pair. He looked confused at first but took them and smiled and said, "Thank you. God bless." I gave two more pairs for his buddies.

I moved on to a woman sitting alone on a park bench, with her sleeping bag pulled up to her nose. She was asleep. I laid a pair of cushy new socks over the bottom of her sleeping bag. I moved on. After 20 minutes, I returned for the second bag, then, soon after, for the third. An hour later, I had given out many bags of socks. Most people were sleeping, and I felt like a modern day Santa. I knew that when they would wake up they would find a very meaningful present. That gave me an amazing feeling. Even better was that I did it anonymously -- they would never know it was me. It also felt darn good to evade those meter maids.

The next week, I did the same thing -- filled up my Ross cart with socks (the checkout lady probably thought I am sock-puppet actor). I went to Palisades Park again and was surprised to find different homeless people. Under the cloak of darkness, I handed out all my socks again. That was nine years ago. Every week on my way to one of my workouts I'll hand out as many socks as I can (and now gloves too when it's cold). Some of the regulars call me "The Sock Guy." If I'm on vacation or away speaking at a conference for more than a week, you might wonder, "Well Brian, what do you do then?" I bring a bag of socks with me and hand them out wherever I am to the homeless on the streets in other states and countries. For the last 22 years, my mother-in-law has said, "It's only by the way the cards are dealt that you are helping and not being helped." When I was younger, I didn't quite subscribe to that. Now with "maturity" (never say "older"), I get it.

It's addictive, I suppose -- the smiles -- the feeling you get throwing away those empty bags at the end of a run. It's incredibly satisfying to operate "under the radar" to help make some people's lives a little bit easier. Part of me hopes to see Al out there one of these days, but even if I don't, I like to think one of the extra pairs will find him.