Imagine if the entire population of your nearest neighboring town or city suddenly moved to where you live, nearly doubling the population. Think about some of the challenges you and your community would face in terms of your access to public services, schooling, jobs and social services. In the United States, we have the recent memory of the displacement caused by Hurricane Katrina and the stress it placed on host communities in neighboring states. There was a sudden need for support, assistance and volunteers to help host communities meet the immediate needs of the newcomers. 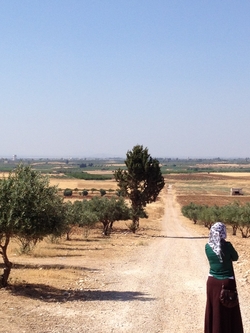 Now imagine that scenario happening to many towns and cities simultaneously across the country, but in a place without the benefit of the United States' resources or space, and as a result of more than two years of brutal war in a neighboring country. That's the situation currently facing Jordan. With a small domestic population of 6.5 million, Jordan has received more than half a million registered Syrian refugees since that country's internal crisis began. Below its border with Syria, the northern region of Jordan has absorbed the majority of refugees. Syrian families are moving in wherever they can, being absorbed into Jordanian host communities around them and putting pressure on already strained local economies, municipal services and natural resources. And while this is happening primarily in the north of Jordan, the southern region of the country faces development challenges of its own, including lack of employment opportunities, water scarcity and rural poverty.

In a massive refugee crisis like this one, it is essential to focus on refugee needs. But we also have to address the needs of host communities — their pre-existing needs and the new ones created as they welcome so many new families.

At Global Communities, we are working in partnership with the United States Agency for International Development (USAID) and the local Jordanian organizations Al Jidara and Jordan River Foundation to address host community challenges and strengthen their ability to cope with the demands they are facing. In April, we launched the USAID Community Engagement Project (CEP) in Irbid and Mafraq, along the Syrian border, and in Tafileh, in the south, to help Jordanian communities meet pressing needs during this time of change due to a combination of factors, including demographic changes, economic pressures due in part to the global financial downturn, etc.

Knowing these communities are already under stress, our teams visited towns and villages in Jordan to talk with community leaders and members to quickly determine how rapid solutions and fixes can be found to meet community needs. Right away our teams started working with local residents, conducted grants meetings for organizations in each governorate, and approved and funded 29 different projects. Each project provides a solution, or support, for a need identified by the community.

The projects reflect the priorities of each community and benefit longtime residents and refugees alike: better systems for trash collection, including formal services as well as community clean-ups; creation or improvement of youth recreational opportunities, including sports clubs; enhancing public spaces that have suffered neglect; and improvements to schools, especially for girls.

We took special measures to tap the strengths of women in improving their communities by seeking their input. At the first community wide meeting nearly 40 percent of the 250 people who attended were women.

The women not only showed up, they took very active roles in discussing the needs of their communities, and how best to meet them. For many of these women, this was the first time their input had ever been solicited. Their participation helped emphasize how important it is to directly address the realities of the people living in those communities. For example, women who want to work are limited by the lack of access to good childcare that would enable them to work outside their homes. Consequently, one project we have supported is the opening of a licensed nursery. It will be fee-based so it is sustainable, and it will employ licensed providers directly from the community. This will create jobs in the community as well as make it possible for others to work outside the home, increasing household income.

All this work is at an early stage, but we are set to help the Jordanian people address their needs. By asking the community to identify and meet their own needs, we know we can implement sustainable solutions to their challenges.