That's the Lebanese daily Al-Akhbar's headline for an article on the country's Press Syndicate that hosted this week's launch of a media ethics charter for online news sites and whose president nearly missed the occasion.

In his remarks, the syndicate vice president, speaking on behalf of his tardy boss, couldn't distinguish between "electronic media" (i.e. online news media in local parlance) and social media, leading someone in the audience to quip that the man was probably addressing Mark Zuckerberg who he thought also attended the event.

Interestingly, there were no women speaking for the news websites in question at the launch. 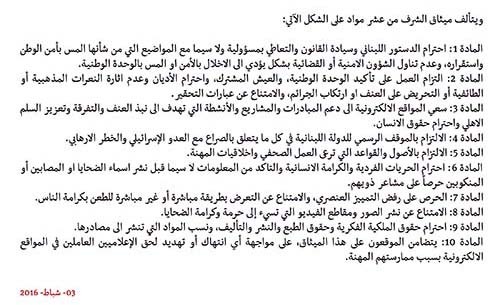 A report on the Lebanon Debate news site listed the code's clauses as follows:

1. Respect for the Lebanese constitution, the law's sovereignty, and the responsible handling of topics that may adversely affect national security and stability, and, refrain from covering security and legal issues that may destabilize security or undermine national unity.
2. A commitment to reaffirm national unity, coexistence, respect for religions, not resort to sectarianism or incitement to violence or commission of crimes, and refrain from the use of contemptuous language.
3. Seek efforts by electronic sites to support initiatives, projects and events aimed at renunciation of violence and segregation, to reinforce civil peace, and to respect human rights.
4. Adherence to the Lebanese government's official position on the conflict with the Israeli enemy and the danger of terrorism.
5. Adherence to rules that foster journalistic work and professional ethics.
6. Respect for individual freedoms and human dignity, verification of information, notably before publishing the names of victims, the injured or distressed, in the interest of loved ones.
7. Repudiation of racial discrimination and refraining from directly or indirectly attacking people's dignity.
8. Refraining from publishing pictures or video clips that insult the sanctity and dignity of victims.
9. Respect for intellectual copyrights as well as publication and authorship rights, and attribution of content to sources.
10. The undersigned express their solidarity to confront any violation or threat against media workers in electronic websites in the exercise of their profession.

Multi-stakeholders wrestled with the issue of Internet governance at a December conference in Beirut and the Maharat Foundation issued a report on Internet freedom in Lebanon, but the jury is still out on how to balance access to information, secure one's data, protect users' rights and implement the laws. 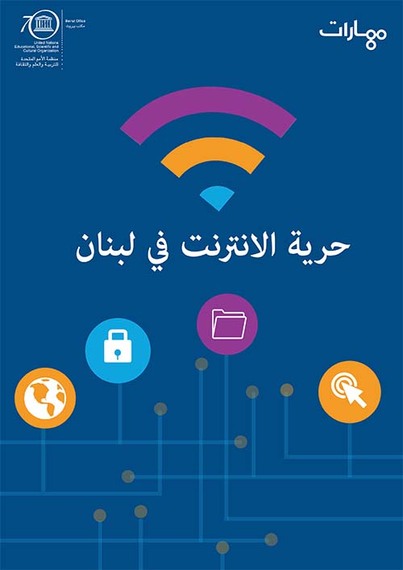 Bloggers, activists, citizen journalists and other types of online media practitioners not officially recognized by the state have had to face various degrees of harassment for tweets, Facebook posts, and content that have put them at odds with assorted and sundry.

On some occasions they were hauled before the military court, or other bodies with criminal jurisdiction, while on different occasions they were summoned by the Publications Court, whose media laws date back decades, and is not qualified to handle online cases.

It's this sort of retrograde and tech-challenged approach to media innovation and disruption that is causing a ruckus in Lebanon, where more savvy youth eager for instant news, engagement and feedback are facing a wall of obstruction, half-measures, and ignorance from the powers-that-be.

These powers are represented, among others, by an elderly lawyer in the position of information minister, whose pronouncements indicate negligible knowledge of what's at stake, much less who journalists today are and what skills sets they should master for ever-changing market needs.

Another is the head of the Press Syndicate, whose election last year to replace his 90-year-plus predecessor was more of a political and sectarian tug-of-war within media ranks than the choice of a candidate able to meet 21st Century challenges.

A committee of parliamentarians came up with draft legislation to overhaul Lebanon's antiquated media laws - print and broadcast media are currently adjudicated separately - with passing reference to online news outlets but the proposed law has languished in parliament for the past five years.

The two unions representing print media have not been expanded to include radio, TV and online workers, and are not likely to under present circumstances. 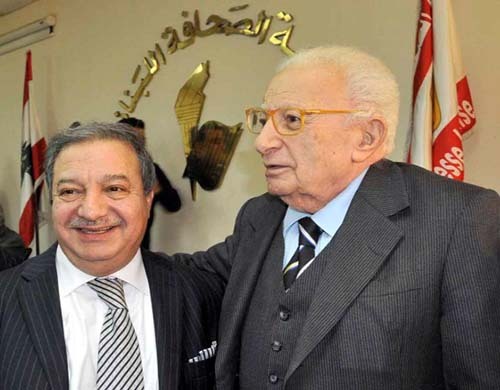 Screen shot of current and past Lebanese Press Syndicate heads

It's a lop-sided equation and the newly launched ethics guidelines have drawn the expected snide remarks from netizens who see the "code" as another example of cluelessness by those who formulated it.

Previous attempts to regulate Internet use in Lebanon were met with a predictable outcry from all involved who saw them as attempts to silence them.

One such move would have required journalists and bloggers to register their sites with the Ministry of Information.

According to the NGO Social Media Exchange (SMEX), freedom of expression is regressing in Lebanon, online and on the ground.