Meet the only car that that can pass the Bugatti Veyron Super Sport.

The Hennessey Venom GT broke the speed record for a production car, hitting 270.49 mph earlier this month during a run on the former space shuttle landing strip at Kennedy Space Center in Florida.

That tops the 269.86 mph mark set by the Veyron -- a difference of just 0.63 mph, but Hennessey says the Venom was still accelerating at 1 mph per second when it had to stop as it approached the end of the runway.

“If we could run on an 8-mile oval we could go faster than that," driver Brian Smith was quoted as saying in a new release. "On the very top end there was a little wandering but, hey, we’re going 270 mph!"

While the Venom GT broke the Bugatti record, it may not get official recognition from Guinness World Records. The records arbiter says a car must make two runs in opposite directions, and the car enthusiasts website Top Gear reports that NASA wouldn't allow the car to go the other way on its runway.

Top Gear adds that Guinness only considers runs of 30 or more vehicles to be production cars -- and Hennessey is planning to make just 29 of the Venom GT, as each vehicle takes six months to build. 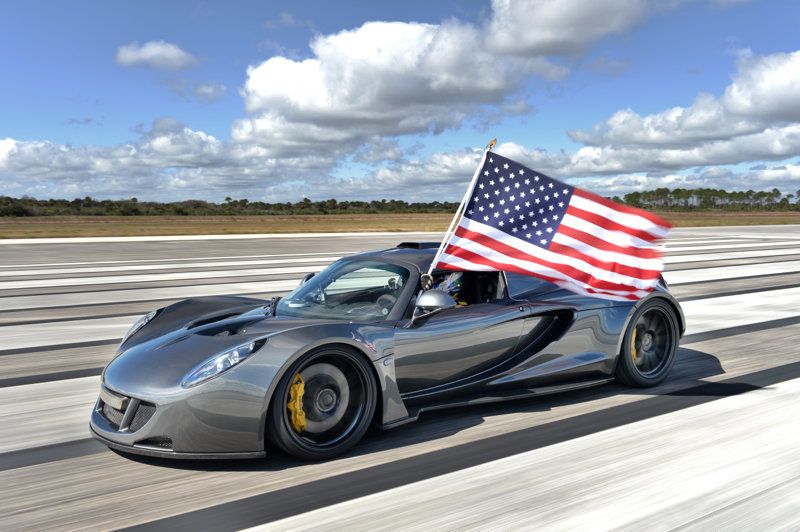 1 / 15
Hennessey Venom GT
The Hennessey Venom GT shows its colors after the U.S.-made car tops the speed record for a production vehicle set by the Bugatti Veyron. The Venom reached speeds of 270.49 mph, just breaking the previous record of 269.86 mph.
Hennessey