In one of the more bizarre recent examples of "just putting it out there" Internet journalism, Business Insider editor Henry Blodget raised some eyebrows on Tuesday when he wrote a post with the arresting headline "Why Do People Hate Jews?" (UPDATE: Blodget later apologized for the post. See more below.)

Blodget said that his query was prompted by a recent flap in Britain over an exam which asked the same question.

"The question was immediately blasted as inappropriate and quickly withdrawn," he wrote. "But it's an interesting and important question." Noting that "Hitler, for example, hated the Jews so much that he murdered 6 million of them," Blodget wondered, "Why? What is the source of this animosity? Why does it perpetuate itself? Where did this prejudice come from?"

He then asked his commenters to muse on the subject, assuring that he would weed out the anti-Semitism and presumably leave the well-reasoned arguments about why people hate Jews. 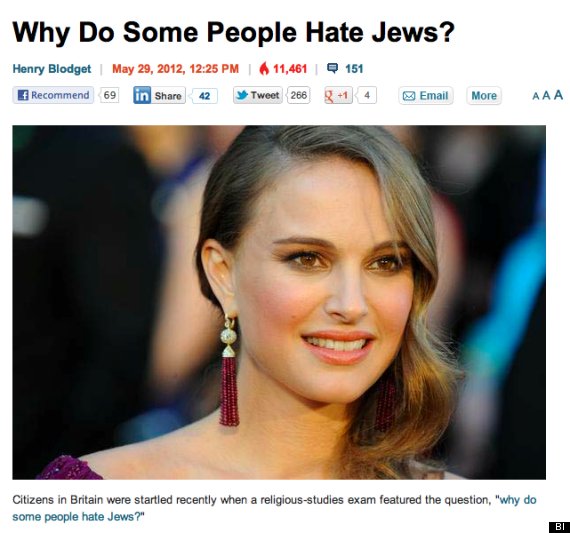 Blodget also switched his original picture (which showed Orthodox Jews) to one of Natalie Portman, who he said he had just learned was Jewish.

"Some readers found that needlessly provocative," he said of the Orthodox picture.

UPDATE: Blodget attached a note to the post, apologizing for writing it. Read part of the note below:

I got the feedback that clued me into the fact that I had crossed a line I hadn't intended to cross. Some people I like and respect told me they felt insulted by and uncomfortable with the post. That did it. Whatever interesting responses came from the post, I now regret writing it. (I'm okay making people feel uncomfortable about some topics, but not this one.) I am very sorry to anyone I offended. I sincerely apologize.

Below, see some of the reactions to the piece.