Warner Bros. has released a first look at the British star in his blue bodysuit and red cape for "Man of Steel," the Zack Snyder-directed reboot in which he plays that Kryptonian do-gooder.

To fit into that suit and attain the built look of Superman, he's been on a crazy diet and workout plan, which he recently revealed involves 5,000 calories a day.

Cavill, formerly of "The Tudors," will next star in the ancient actioner, "The Immortals."

Here's the official press release from Warners; check the photo below.

BURBANK, CA, August 4, 2011 – Warner Bros. Pictures and Legendary Pictures have provided the first look at the new “Man of Steel,” revealing star Henry Cavill as Superman in the film from director Zack Snyder.

Rounding out the cast are Harry Lennix as U.S. military man General Swanwick, as well as Christopher Meloni as Colonel Hardy.

“Man of Steel” is being produced by Charles Roven, Emma Thomas, Christopher Nolan and Deborah Snyder. The screenplay was written by David S. Goyer, from a story by Goyer and Nolan, based upon Superman characters created by Jerry Siegel & Joe Shuster and published by DC Comics. Thomas Tull and Lloyd Phillips are serving as executive producers. 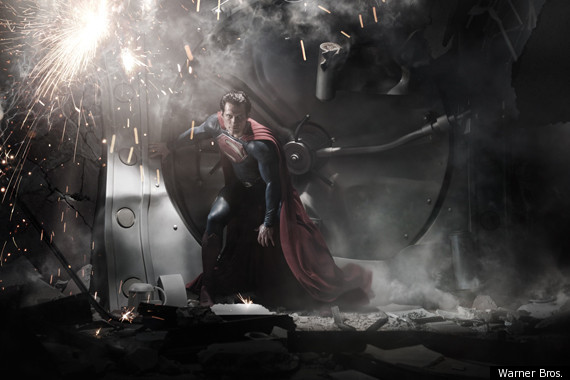