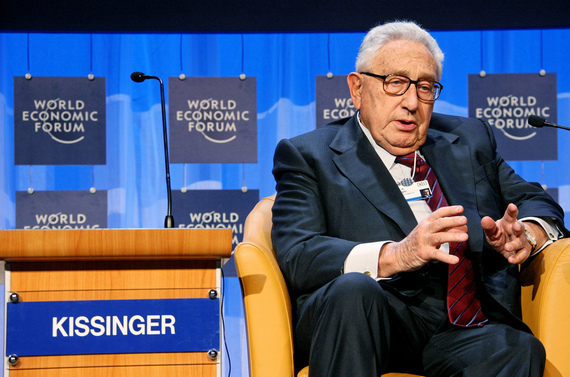 When it comes to foreign policy, Hillary Clinton says she has a clear mentor. The former secretary of state, Henry Kissinger. The man that Christopher Hitchens said should be tried for war crimes in his book, The Trial of Henry Kissinger.

Kissinger is a monster. So much so that her rival for the Democratic nomination Bernie Sanders has made it a point to mention he would not want anything to do with the man.

"She talked about getting the approval or the support or the mentoring of Henry Kissinger," Sanders said during Thursday night's debate. "Now, I find it kind of amazing, because I happen to believe that Henry Kissinger was one of the most destructive secretaries of state in the modern history of this country."

As secretary for Richard Nixon, Kissinger was responsible for the carpet-bombing of Cambodia, supporting Pakistan's genocide in Bangladesh, supporting the Argentinian dictatorship's murderous crackdown on dissidents. Things he did as part of his battle against the big scary enemy of communism.

This is the man Hillary Clinton calls a mentor and touts his support of her campaign.

When it came to Soviet Jews, Kissinger said their extermination would be no concern to the American government.

It may be a humanitarian concern, but it's not of concern to America?

What a wonderful human being Kissinger is. Yet, Clinton wants to question Sanders foreign policy?

Maybe it's just me, but when choosing a candidate based on foreign policy, I'll choose the one who doesn't accept the mentoring and seal of approval of an anti-Semitic war criminal.