Henry Miller was one of those rare artists, like the English Romantic poet William Blake, to have achieved mastery in two media: language and paint. Though better known for his novels and essay collections, especially the notorious Tropic of Cancer, Miller was also a skilled and devoted watercolorist who painted throughout his writing career and beyond it. Unlike writing, which Miller considered work, his job, he regarded painting as play, a form of relaxation, a way to refresh and recharge his imagination. But watercolor painting also served Miller in a number of practical ways. When short of funds, as he often was, he used his watercolors to barter for services, such as dentistry, and goods, such as household supplies and food. Sales of watercolors at his numerous shows supplemented his slender royalty income from his published books. He also gave watercolors to people who had done him favors or sent him unsolicited presents or cash. After his banned Paris books were finally published in the U.S. during the 1960s and ran immediately to the top of the bestseller lists, Miller, on the advice of his tax attorney, used his watercolors to shelter his income by donating them to museums.

In The Paintings of Henry Miller, a collection of four-color plates of Miller's watercolors accompanied by several Miller essays on the art of watercolor painting, Miller tells us that he began to paint around the year 1928 when he was living in Brooklyn and struggling to find himself as a writer. His interest in painting had been stirred by watching his close friend Emil Schnellock at work in his Manhattan studio and listening to Emil discourse on various artists and their methods. Over the years of his evolution as an artist, Miller would write frequently to Emil, sharing intimate details about his goals and methods in both painting and writing.

One evening as Miller was walking home with a friend from an evening of unsuccessful panhandling, they stopped to study a reproduction of a painting by Turner on display in a department store window. Fired by the image, Miller went home and began to paint in a kind of frenzy, using whatever materials were at hand, including old coffee grounds. Painting gave him a creative outlet from his frustrations as a blocked writer. Though Miller never had formal instruction in art beyond a class in high school⎯the teacher found Miller utterly without talent ("I was an aesthetic leper, so to speak," Miller remarks) ⎯the experience of painting had a tonic effect on him. "I remember well the transformation which took place in me when first I began to view the world with the eyes of a painter. The most familiar things, objects which I had gazed at all my life, became an unending source of wonder, and with wonder, of course, affection." This discovery led Miller to formulate the credo by which he approached not only painting but all forms of art: "To paint is to love again."

Once in Paris, Miller continued to paint and made the acquaintance of many prominent artists whom he met in the bohemian cafés of Montparnasse: Zadkine, Max Ernst, Soutine, Tihanyi, and above all, Hans Reichel, from whom he took lessons.

Miller never became an accomplished technical painter. He admitted that he had no aptitude for drawing, his figures and shapes looking as though a child had lined them. He avoided putting ears on human heads because he could not draw them. But he was a gifted colorist, and painted fearlessly, uninhibited by his lack of mechanical skill. In an essay he titled "The Angel is My Watermark" that was published in Paris in 1936 in his book Black Spring, Miller describes his anarchic method of composition. He launches into his watercolor without plan or design, proceeding instinctively and impulsively. He begins to draw a horse, working from his memory of Etruscan horses he has seen on ceramics in the Louvre. The horse soon mutates into a zebra and finally is obliterated altogether as other shapes are formed by Miller's truant pencil. But Miller is not dismayed by his inability draw, to produce images that are representational. He glories in it. "When I get into a predicament of this sort I know I can extricate myself when it comes time to apply the color. The drawing is simply an excuse for the color..." What allows Miller to "succeed" as a painter, to produce works of art that satisfy him and give him pleasure, is that he does not fear failure. He incorporates his mistakes, his false starts, and builds on them until he achieves the desired result. Miller finds a larger life lesson in this process. "And this is precisely the ritual of life which is practiced by the man who evolves. He doesn't go back, figuratively, to correct his errors and defects; he transposes and converts them into virtues."

Beyond discoursing on technique and methods, Miller reflects on the significance of the act of painting and the aesthetic of the watercolor. "It's only when we look with the eyes of love that we see what the painter sees," Miller writes. "What the painter sees he is duty bound to share." Though Miller does use his paintings as a form of currency, selling them or using them to barter, he derives the greatest pleasure from simply giving them away. When he was trying to obtain a pardon for a reformed criminal serving a life sentence in Missouri State Penitentiary for repeated armed robbery convictions, Miller sent watercolors to the warden of the prison, who hung them on the walls of his office. The convict was pardoned.

Miller's paintings are easy to look at, bold and striking, often bringing forth a smile of delight from the viewer. Themes and patterns recur in ever changing variations. Though he confesses no skill at portraiture, many of his paintings depict the faces of men and women⎯whether the subjects were people he knew or simply imagined makes no difference. They all look vaguely alike in shape. What distinguishes them is color. Miller likes to place strong colors side by side⎯orange and black, red and blue, yellow and green⎯often in the same painting. The effect is of richness and exuberance. He uses simple, roughly drawn geometric shapes⎯squares, rectangles, circles, cones, crescents⎯to suggest forms. Forms he likes are birds, houses, sailboats, and flowers. He spices the paintings with plain symbols⎯asterisks, Xs, Os, the Star of David, musical notations (sharps and flats), words. The cumulative effect is both charming and gentle on the eye. His favorite image is the clown, an archetypal self-portrait.

Miller learned to paint by studying the work of other painters, masters of the medium. His acknowledged sources include Marc Chagall, Paul Klee, as well as Turner, Seurat, and Rouault. He notes that many great painters, such as Vincent Van Gogh, were also gifted writers, and great writers, such as Goethe and Victor Hugo, also expressed themselves through graphic arts. "When one is an artist all mediums open up," Miller observes. "No one medium is sufficient to express the wealth of feeling which burdens the soul of an artist." 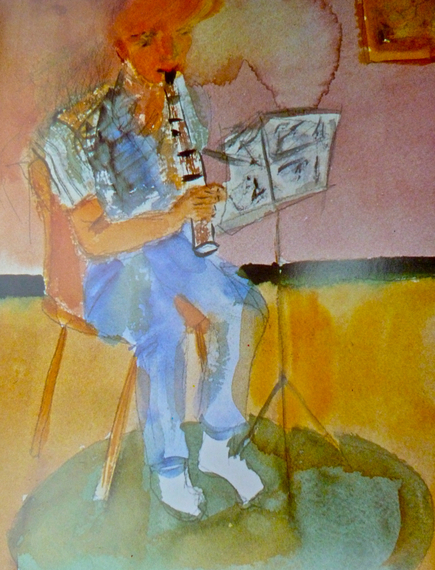