After Henry Miller married his second wife June Mansfield and, at her urging, gave up his job as the employment manager of Western Union, he vowed never again to hold a job, never again to march in lockstep with the rest of humanity. Writing would be his work, his career, and he would scavenge and scam, beg and borrow (but not steal), to keep himself afloat. And with the exception of a brief employment with the city parks department of New York during the 1920s, a hastily abandoned position teaching English at a lycée in Dijon, France, and a short stint as a proofreader at the Herald Tribune in Paris, Miller stuck to his vow. Though Miller had been writing full time since the mid 1920s, it was not until he began receiving royalties from Europe in the 1940s that he could support himself, barely, from his writing. His financial mainstay during this period of extended poverty was Anäis Nin. But he also had a network of male friends who, over the years, helped him in a variety of ways: by giving him emotional and psychological support through their affirmations of belief in his writing, by picking up tabs at cafés and restaurants, by serving him meals in their homes, by letting him bunk in their apartments and hotel rooms, by providing needed services he could not afford to pay for, by publishing and distributing his writing at their own expense.

Miller's oldest and closest friend was his Brooklyn boyhood chum Emil Schnellock, a painter who became an art instructor at the University of Mary Washington in Fredericksburg, Virginia. It was Schnellock who gave Miller ten dollars at the moment of his departure for France, his only stake as he boarded the ship in New York. It was Schnellock to whom Miller wrote long letters on Paris café stationery describing his life in France. Passages from these letters Miller transferred verbatim into Tropic of Cancer. And it was Schnellock to whom Miller wrote about watercolor painting and the meaning of living one's life as an artist.

Shortly after arriving in Paris, Miller reconnected with Alfred Perlès, an Austrian expatriate whom he had met on a previous trip to Paris in 1928 with June. Perlès was a true bohemian, a novelist himself, eking out a living as a journalist for the Herald Tribune, and mingling with other artists at the Montparnasse cafés. Perlès covered Miller's tabs at the Dôme and the Rotonde, and let Miller sleep in his shabby hotel room while he was at work, giving Miller a place to rest and to write. Perlès later wrote My Friend Henry Miller, a flattering tribute to Miller's talent and character.

Another important literary friend from the Paris years was Lawrence Durrell, the British author of the highly regarded Alexandria Quartet. Durrell was living on Corfu and wrote Miller an admiring letter after reading Tropic of Cancer. Miller replied, and a friendship and correspondence that lasted until Miller's death in 1980 was born. Miller shared with Durrell both his aspirations as a writer as well as intimate details of his personal life and emotional struggles. In 1959, Durrell edited The Henry Miller Reader, an anthology of Miller's writing that did not include any obscene passages from the banned Paris books.

A surprising friendship developed between Miller and Huntington Cairns, the government lawyer who censored Miller's obscene books and prevented their publication and distribution in the United States. Cairns was a literate man who recognized the artistic intentions behind Miller's use of obscene language to create disturbing effects in the reader. But he was also a lawyer serving the Bureau of Customs and he measured Miller's words against the prevailing obscenity standards of the US courts. He kept Miller's books on "the list," but privately he advised Miller how to overcome the ban. He also arranged a show of Miller's watercolors in Washington, and provided Miller with secretarial services, storage space for papers, and free legal advice. Miller and Cairns corresponded for almost thirty years, until the Paris books were finally published and accepted in the United States.

Two other allies from Miller's Paris years should not be forgotten. Michael Fraenkel, another American expatriate, gave Miller shelter at his comfortable Villa Seurat apartment. But more importantly, he pushed Miller into adopting the clownish voice and anarchic attitude that pervades Tropic of Cancer. "Write as you speak, write as you live," urged Fraenkel, and Miller took his advice. Later, Fraenkel published a lengthy correspondence they exchanged about Shakespeare's Hamlet.

Richard Osborn, a young attorney and aspiring writer who worked at the same bank in Paris as Nin's husband Hugo Guiler, introduced Miller to Nin. He also let Miller stay at his elegant apartment on Rue Bartholdi and put "pin money" on Miller's typewriter each morning before leaving for work. Osborn fled France to escape a romantic entanglement with a French woman of ill repute, an episode that Miller treated with Rabelasian humor in Tropic of Cancer. Miller stayed in touch with Osborn after he moved back to Connecticut to live with his mother, and arranged for publication of a poem Osborn wrote.

After he returned to the United States in 1940, Miller lived for a time in a community near the University of California at Los Angeles that was popular with artists and academics. There he was reconnected with Lawrence Powell, the UCLA librarian and book lover whom he had met in Dijon during his abbreviated teaching appointment. Because of his friendship with Powell, Miller gave the bulk of his personal papers to UCLA, then persuaded Anäis Nin to deposit her papers there as a companion collection. Powell also helped Miller by sending him copies of books he needed to research The Books in My Life, his tribute to the writers who had influenced him. Later, Powell introduced Miller to Jay Martin, Miller's first biographer. Miller resisted the book, and scolded Powell for encouraging it.

The facilitator of Miller's arrangement with UCLA was Bern Porter, one of Miller's most dedicated admirers and supporters. He was an advanced physicist who knew Einstein and had been tapped to work with J. Robert Oppenheimer on The Manhattan Project to develop the atomic bomb. Porter opposed the application of scientific knowledge to the machinery of warfare, and sought to put science in the service of art. He approached Miller in Los Angeles with proposals to publish and disseminate Miller's work, including both his watercolors and his pacifist views. He also compiled and edited a book of tributes to Miller titled The Happy Rock that included essays by Durrell, Schnellock, and Fraenkel, among many others. Porter's publishing ventures, though well intentioned, put him into debt. When Miller learned that Porter, citing the costs, had not given courtesy copies of The Happy Rock to its contributors, he broke with him.

Miller attracted young men disenchanted with the direction of American life. One such was Judson Crews, a disaffected Word War Two soldier who in 1943 made a pilgrimage to Miller's Beverly Glen residence in Los Angeles. He had read Miller while an undergraduate at Baylor University in Texas and was drawn to Miller's anarchism and pacifism. After his medical discharge from the army, Crews returned to Texas to resume his studies in literature and sociology. He operated a small press and bookstore through which he disseminated Miller's work. He followed Miller to Big Sur, spent a year there, and wrote a book called The Brave Wild Coast: A Year with Henry Miller.

Through Porter, Miller was introduced to George Leite, a young radical living in Berkeley, California. Leite had been expelled from UC Berkeley for refusing to take a required defense course. Supporting his wife and their small daughter by driving a taxi, Leite had started an avant-garde literary periodical titled Circle to which Miller submitted articles. He also harbored grandiose ideas to publish not only Tropic of Cancer, but also the diaries of Anäis Nin. These plans came to naught, and Leite, after briefly moving his family down to Big Sur to be near Miller, suffered a physical and nervous breakdown from drug use and was admitted to Napa State Hospital. He recovered, to become a high school math teacher.

Another ally who came to Miller's rescue in a time of need was Walker Winslow. Winslow was a recovering alcoholic and writer who had worked at the Menninger Foundation in Kansas and had been contracted by a New York publishing house to write a biography of Menninger. Winslow had met Miller while living briefly in Big Sur as Miller's neighbor at Anderson Creek, a bohemian enclave not far from the sulfur springs that became the hallmark of Esalen. In 1951 Miller's third wife left him to live with another man and acceded to Miller's plea to give him custody of their two young children, ages six and three. Miller was soon overwhelmed with the task of caring for them and asked Winslow, who was looking for a cheap and secluded place to write, to help him. Winslow moved into Miller's small studio on Partington Ridge, but soon the two men realized they were in over their heads. Winslow persuaded Miller to return the children to their mother, allowing Miller to return to his typewriter. Miller gave this episode humorous treatment in Big Sur and the Oranges of Hieronymous Bosch.

The most devoted and long-standing of Miller's followers was Emil White. Emil was born in Central Europe, the son of a strict orthodox Jew named Wieselmann. After his family fled to Vienna to escape the horrors of World War One, Emil struck out on his own, first to Switzerland, then to Paris. He immigrated to New York and found work as a messenger at Western Union, under Miller's supervision, but lacked the English skills to hold the job. He eventually moved to Chicago, and during World War Two he began reading Miller's books aloud at meetings of radical political groups. He would pass the hat for Miller and send the collection to him in Big Sur. The two men reconnected while Miller was visiting Chicago, and Miller subsequently invited Emil to join him in Big Sur. Emil came, and took on the role of man Friday. He helped Miller with his extensive correspondence and the daily chores of survival. In return, Miller encouraged Emil to become a painter, which he did, producing works of startling beauty executed in a detailed primitive style. Emil remained in Big Sur for the rest of his life and bequeathed his home on Highway One to become the Henry Miller Memorial Library. 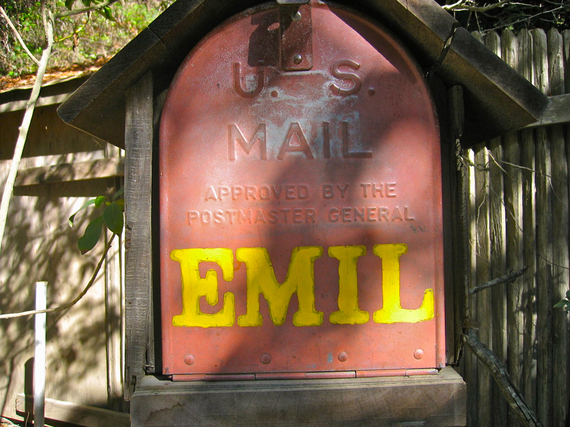