A litter of kittens was found dumped in a box on the side of a highway when they were barely two weeks old. With no mother present.

Ketchikan Humane Society took them in, its volunteers knew they had a tough job on their hands to provide the constant care the kittens would need. Taking care of kittens is a round-the-clock job, involving cleaning and bottle-feeding the kittens every two hours. One member of the staff, Heather Muench, took the kittens home with her one night. She found she had an unexpected helper: her pet cat, Henry. 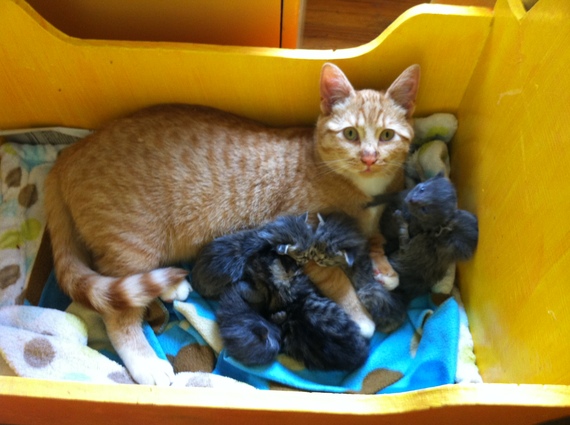 Henry is eight months old and Muench adopted him from the Humane Society last year. He has a neurological disorder that sometimes makes him unsure of himself on his feet. But he went right in and started grooming the kittens.

"The first thing he does is start compulsively licking one," Muench told local radio station KRBD. "He'll spend hours in there, licking them, over, repeatedly. I think, 'Oh my gosh, they're not going to have any fur left.' But he's really good at cleaning them up."

Henry is also increasing the kittens' chance of surviving and developing them into well-adjusted cats.

Once the kittens - now named Greg, Marcia, Peter, Jan, Bobby, and Cindy - are old enough to be vaccinated and neutered, the Humane Society hopes to put them up for adoption.