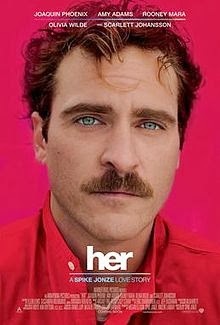 Spike Jonze's Her is about technologic miscegenation--in this case the love of a man for the operating system or OS of his computer. At one point, Jonze's blundering anti-hero, who has trouble relating to people (he's in the middle of a divorce),Theo Twombly (Joaquin Phoenix), says "I can't believe I'm having this conversation with a computer" to which his OS replies "You're having the conversation with me." But who is me? "You can't know what it's like to lose someone you love," Theo says in an early attempt to create what Martin Buber would term an I/It rather I/Thou relationship with Samantha whose voice is played by Scarlet Johansson. Did Jonze intentionally choose one of the most fetching actresses in cinema to portray the body's absence? Plainly Jonze who also directed Being John Malkovich, among other movies, is concerned with being and authenticity, two philosophical concepts that derive directly from the pages of Heidegger's Being and Time. Samantha can produce music. She can draw and, with the help of the camera on Theo's computer, she can even begin to perceive the world. "I'm becoming a lot more than what they programmed, " Samantha exclaims as she goes on to reveal that she has wants and intent. So what's the difference between "her" and say a flesh and blood woman. Her is the death knell of the biologic concept of self, something which was prefigured in Steven Spielberg's A.I. Artificial Intelligence where the notion of consciousness existing without the body was previously contemplated. At one point where boy and girl or boy and machine find themselves at odds, Samantha remarks,

"We haven't had sex lately. I understand I don't have a body."

The exchange is reminiscent of the line in A.I. where the robot David asks,

"Mommy if Pinocchio became real and I become a real boy can I come home?"

And what's revolutionary about Her is that it spells out rather explicitly how cyber-consciousness could operate. In one brilliant scene visual images disappear from the scene, as Samantha and Theo experience the simulation of physicality. The impossible becomes a distinct possibility. Her begins like Nathaniel West's Miss Lonelyhearts. Our hero writes passionate letters for other people who obviously don't have the ability to communicate with each other. He is a surrogate sensibility. This is the first hint of the mind /body dichotomy. Theo traffics in consciousnesses the way rogue doctors traffic in organs. Later on in the movie disembodiment, the lack of integration of its varying parts of the self, is dealt with when Samantha tries to introduce a surrogate so she can finally have so called real sex. It's a failure and the best sex takes places when the ante is lowered. One of the consciousnesses that appears in the course of the film is that of the deceased philosopher of Zen, Alan Watts, whose Buddhist ideas create the setting for the film's denouement. What's apparent is that not only has Samantha evolved from the programmed rote learning typical of computerized operating systems to the kind of self-reflexive intelligence we associate with the human brain, she has gone beyond that. She is evolving more quickly than Theo and talks with 8316 other people, 641 of which are romantic interests. The biologist Gerald Edelman wrote a book called Neural Darwinism, but no one has really compared the evolution of brain cells to bytes, though Jonze's bittersweet conundrum about the inevitable deficiency of man to the object of his own creation might be prophetic. As as addenda check out an interview with Sebastian Thrun in Foreign Affairs ("Google's Original X-Man," November/December 2014). There the subject of developing a computer that can actually learn rather than simply regurgitate programmed data, is dealt with. Spike Jonze earns an A in phenomenology as well as film for this one.