A rare Roman-era statue of Hercules was discovered in Northern Israel, and experts are hailing the find for its "exceptional artistic quality." 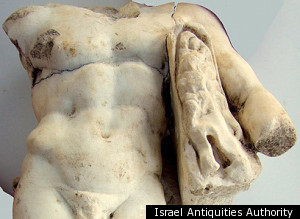 The headless piece depicts Hercules in a typical pose, draped in a lion skin and resting on a club, the latter of which was detached from the statue and likely destroyed. The most important aspect of the statue, according to Dr. Walid Atrash of the Israel Antiquities Authority, was its size. Dr. Atrash said: "This statue is unusual because it is small. Most statues of gods from this period were life-size. This is something special."

The excavation site, which Ynet News reports was probably a Roman-era bathhouse, was being worked on for the new Valley Rail line, which will run from Haifa to locations near the Jordan border.

The site, though not previously known for its archaeological significance, is hoped to contain more historically significant pieces.