Donald Trump is going to be the President of the United States. But if oddsmakers are right, there's a 50-50 chance that he won't hold the office for that long. At 4 p.m. Eastern on January 11, the British gambling company Ladbrokes said odds are even that Trump will be impeached or resign before his first term ends. By 5 p.m. the odds had risen even more, to 11-10.

On January 19, Trump's odds of leaving office before his first term had dropped back down to even.

The odds are part of a group of "Donald Trump Specials" offered by Ladbrokes, including a 2-1 bet that he won't be reelected in 2020 and a 5-4 bet that he'll visit Russia by the end of the year. Now, gambling odds aren't exactly reliable predictive science -- they're pretty far from it, in a lot of cases -- but there's lots of reason to think that a bet against Trump finishing his first term is a pretty good bet.

Since the original odds went up, Ladbrokes has added a new suite of bets. Gamblers can now wager on which year Trump will leave office. Options include 2021, which is when he would leave if he loses the 2020 election, and terrifyingly, "2025 or later" -- emphasis ours.

The Constitution states that "Treason, Bribery, or other High Crimes and Misdemeanors" are grounds for impeachment. In reality, impeachment is a highly political weapon since Congress defines what a "High Crime and Misdemeanor" is. Heck, if the opposing party is mad enough and has enough power, a blow job is an impeachable offense (if you lie about it in court, that is). Only two presidents, Bill Clinton and Andrew Johnson, have been impeached, though Richard Nixon surely would've been had he not resigned in the wake of the Watergate scandal. For Trump to actually be impeached, the highly Republican House of Representatives would have to initiate the process. Here are some of the reasons why they could, perhaps, impeach Trump.

If some of the allegations in the recently published leaked memo about possible Russian blackmail material over Trump are true, that would be an impeachable offense. No, not the golden shower part (Article One isn't out to kink-shame), but the treason part. If Trump is proven to have been in contact with the Russian government, and is letting Vladimir Putin overtly shape American policy, that could be reason for him to get the boot.

Trump's lawyers say that he, as the president, is legally protected from having conflicts of interest. This is different from not having conflicts of interest in the first place. Although Trump gave his two sons control of his business (which is not at all the same as placing assets in a blind trust), there's still a lot of potential for shady activity. Trump says he'll donate any money when foreign representatives stay at a Trump hotel to the U.S. Treasury, but that could still be perceived as a bribe. They're staying at a Trump hotel to curry favor with the president.

Trump could accidentally divulge confidential information to his family -- or, Christ, to the whole world in a 3 a.m. tweet. Such a wanton breach of national security could be viewed as grounds for impeachment.

Or, he could lie under oath about literally anything.

The president-elect could also sexually assault somebody. It wouldn't be the first time he's done so, allegedly. 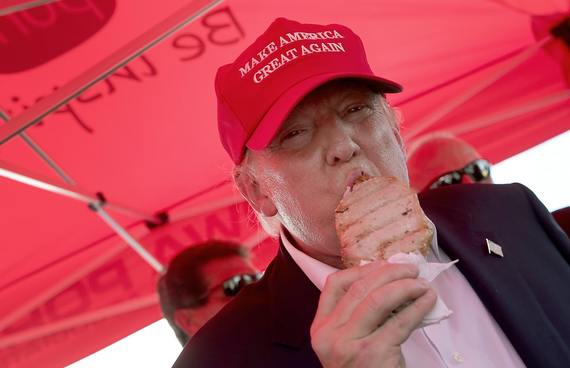 Again, impeachment would be all on the Republican-controlled House, so it seems unlikely that they're going to want to impeach Trump. That said, you can place an even money bet that he won't finish out the term over at Ladbrokes right now. Maybe he'll just get bored and quit. Stranger things have happened, and you'd still get the money.