This is the final part of a three-part series. Read part two here. 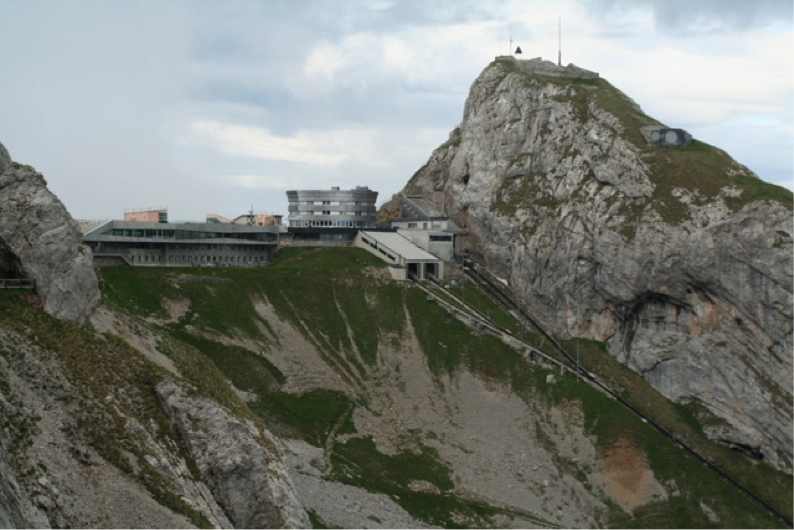 "Life on the Summit," Laura Hubber

I take a tour of the top of Pilatus Kulm, passing a pack of young Chinese boys skipping like young rams, then a gaggle of women speaking Russian and wearing so much fur they're practically an ecological disaster. The mountains of the Bernese Oberland are forever tugging at my view. I pause once again to gaze, and then look down to see my 3-year-old son, Jasper, transfixed by the distant scene. It seems a look of The Sublime. Anthony Ashley Cooper, third Earl of Shaftesbury, made the Grand Tour in 1686 and then, in perhaps prescient advance of the Romantics, wrote a rhapsodic account of mountains in The Moralists, published in 1709. But he saw The Sublime as a rhetorical term (like Longinus before him), describing a form of literature that appealed only to barbarians and children. He wrote: "'Tis easy to imagine, that amidst the several styles and manners of discourse or writing, the easiest attained and earliest practiced, was the miraculous, the pompous, or what we generally call the sublime. Astonishment is of all other passions the easiest raised in raw and unexperienced mankind. Children in their earliest infancy are entertained in this manner; and the known way of pleasing such as these, is to make them wonder, and lead the way for them in this passion by a feigned surprise at the miraculous objects we set before them." That may be true, and I am as guilty as all parents in this dynamic, but at this moment, on this ledge, with this view, there is astonishment that transcends all generations, all cultures. We all are experiencing what Shaftesbury described as that fine sight that is "amazingly beheld with a kind of horror and consternation." 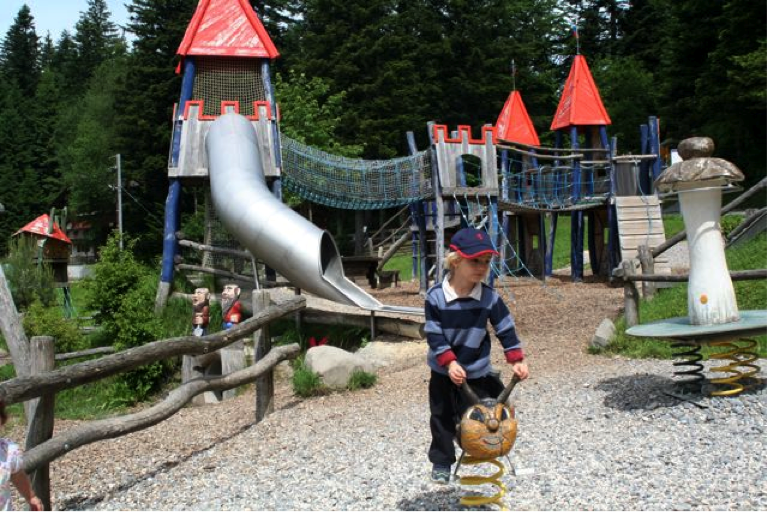 I pop into the Dragon Shop, where I find a flyer called "History of the Conquest of Mt. Pilatus, an evolutionary success story." It is not an anti-creationist screed but rather a timeline of the various tourism enterprises on the mountain, from the cog railroad to the hotels and restaurants on top. Then I make my way down the Dragon Track, along a corridor cut into a cliff face. Here I meet the fiery Colette Richter, who works as a marketing manager for Mount Pilatus, and she is steeped in dragon tales, which she promptly shares with a wide-eyed Jasper. One goes that in the summer of 1421, an enormous dragon was flying to Mount Pilatus when it crashed close to a farmer named Stempflin, who fainted from the shock. When he recovered, he found a clot of blood containing a "dragon stone" and took it to the city, where the stone's healing powers were "officially" confirmed, as any ills his family suffered were miraculously cured. It was said to be a nostrum for "haemorrhage, dysentery, diarrohea, poisoning, plague, and nosebleeds." It may be the source reason that so many pharmaceutical firms are based today in Switzerland.

Colette enchants Jasper with another story of a young cooper who went wandering the mountain in the autumn searching for rods with which to make barrel hoops. He fell into a deep cave and landed between two fire-breathing dragons. The dragons nurtured the drop-in through the winter, feeding him moon milk, whatever that is. When spring came, one of the dragons helped the cooper by holding out its tail as a bridge for him to scale so he could exit the dark cave. Then it flew the inadvertent guest on its leathern wings to a lowland meadow and carefully alighted. When the cooper got back to the city, he had the tale of his adventure embroidered on a silken tunicle, which remains today under glass at the Church of St. Leodegar in Lucerne.

Petermann Etterlin, one of the early sixteenth-century Swiss authors who told the tale of William Tell, also wrote of how regional Governor Winkelried killed one of the termagant dragons: he wrapped thorny branches around a long lance and pushed this into the dragon's open mouth; then he finished off the beast with his sword. A drop of poisonous dragon's blood fell on his hand, which somehow made his own blood freeze. The dying dragon exhaled one last poisonous breath on Winkelried, and that was the end of both.

On the morning of May 26, 1499, after a violent night storm, the townspeople of Lucerne gaped in amazement as a giant, wingless dragon lurched out of the River Reuss near the Spreuer Bridge. They assumed it had washed down the mountain in the storm and was just trying to get home. As recently as 1649, the local sheriff said he saw an evil dragon come out of a cave on Mount Pilatus. He said that its head "terminated in the serrated jaw of a serpent" and that it flew about, "throwing out sparks like a red-hot horseshoe hammered by the blacksmith."

The trail tails into a cave dripping with icicles, looking very much like dragon's teeth. The grotto is pocked with window holes, invitations to goat-dizzying views of the mountain falling away into the white profound. Pilatus abounds in pterodactyl fossils, and it's easy to imagine them flying about this precipice. Now, though, the only flying creatures I see through the hole in the rock are the alpine dohlen drawing lazy naughts across the sky. 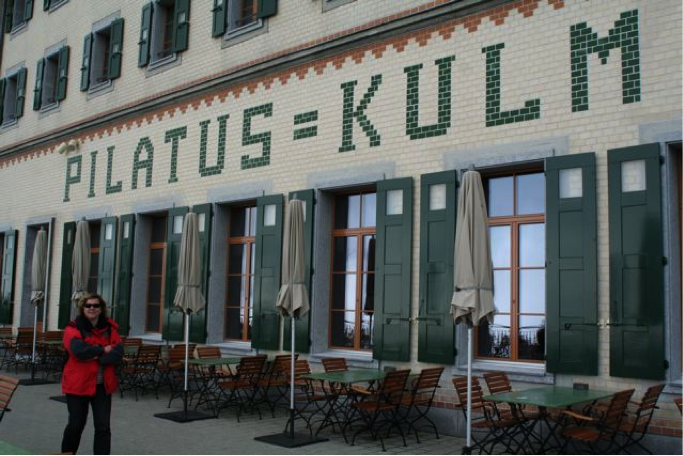 Room with a View, Laura Hubber

Then, after a lunch of pastetli (meat pie) and a tankard of Braugold, the local beer made with pure Pilatus water, at the 1900-built Hotel Kulm, the sky turns lurid. A cold vapor seems to be heaving in, like the breath of a dragon. Shadows of clouds smudge the snow at my feet. The valleys seem to be multiplying themselves in the mist. Of course, ghosts and medieval dragons and monks protecting virgins from ogres cannot exist here. Or can they? It's easy to believe in their reality here, no matter the pedigree of the skeptic. The Danish Nobel Prize-winning physicist Niels Bohr, who nailed a horseshoe above his office door for good luck, was asked by a colleague, "You don't really believe in this stuff, do you?" To which Bohr replied, "No, but I've heard it works even for people who don't believe."

And so I take the aerial tramway down the north side, the cable car floating like a sun-filled bubble into dense cloud to the station of Fräkmüntegg, developed as a sort of mid-mountain adventure theme park. There is the biggest suspension rope park in central Switzerland, a terrifying zip line, and the Frakigaudi Rodelbahn, the longest summer toboggan run in Switzerland, a shiny steel dragon's tail of a track almost a mile long down which a rider barrels on a wheeled sled.

John Baillie in his 1747 essay described sublimity as a "contradictory" sensation of pleasure and pain: "The Sublime dilates and elevates the Soul, Fear sinks and contracts it; yet both are felt upon viewing what is great and awful."

The key word here is "viewing." For Baillie there is a difference between being in the actual battle and contemplating it from afar. Where the former involves a real possibility of death, the latter is just the thought of it. And as I charge down this toboggan run at frightening speeds, at the edge of capsizing on the sharp curves, feeling the torque and rattle in my bones, my heart feathering through my breast, it occurs to me that this is a modern example of Baillie's sublime. It is pleasurable because I am reasonably certain that the groove down which I am plummeting will contain me from catastrophe. The toboggan run mimics the suicidal descent into the abyss, providing me with a glimpse of what a free fall down the mountain might really be like. Hurtling down this mountain track, banking through the sharp turns and shooting through tunnels like a bullet, I feel energized, vibrantly alive, and I can't stop myself from heading back up the mountain to be kicked downstairs three more times.

Then I take the gondola from Fräkmüntegg to Kriens, the wind against the window like the beating of leather wings. Safely at the bottom station, I load up on postcards, one of my last analog ardors. In the late nineteenth century, when Switzerland introduced cards that could be mailed with color pictures covering one side, they were shortcuts to The Sublime and graphic harbingers of envy. What other purpose do they serve than to say, "I'm here and you're not"? I'm as guilty as any in employing these tidbits of schadenfreude, but I am in good company. Leslie Stephen wrote to an American friend in the middle nineteenth century: "You poor Yankees are to be pitied in many things, but for nothing as much as your distance from Switzerland."

Back to Lucerne for the night I head, driving through the blades and bars of moonlight. From the hotel window, I overlook a string of lakeside lanterns. Above, the full moon hangs minted against the sky like a bright Swiss five-franc piece. Outlined against the glow is the sleeping black cat of Pilatus. Legend links the name "Lucerne" (from the Latin lucerna, meaning "lamp") with an angel who, with light streaming from his fingertips, indicated to eighth-century Benedictine monks the site on which they should build the city's first chapel. It was Richard Price who, in an 1789 pamphlet called Discourse on the Love of Our Country, described his ideas of illuminating Europe: "Light becomes a liberating sublime, driving out the false, oppressive sublime of darkness and obscurity through which kings terrorize the people." The nineteenth-century painter-philosopher John Ruskin called it "the unfatigued veracity of eternal light." In that sense, Lucerne is the right kind of sublime. And Pilatus, the dragon mountain flying above, is the right kind magnificent horror. 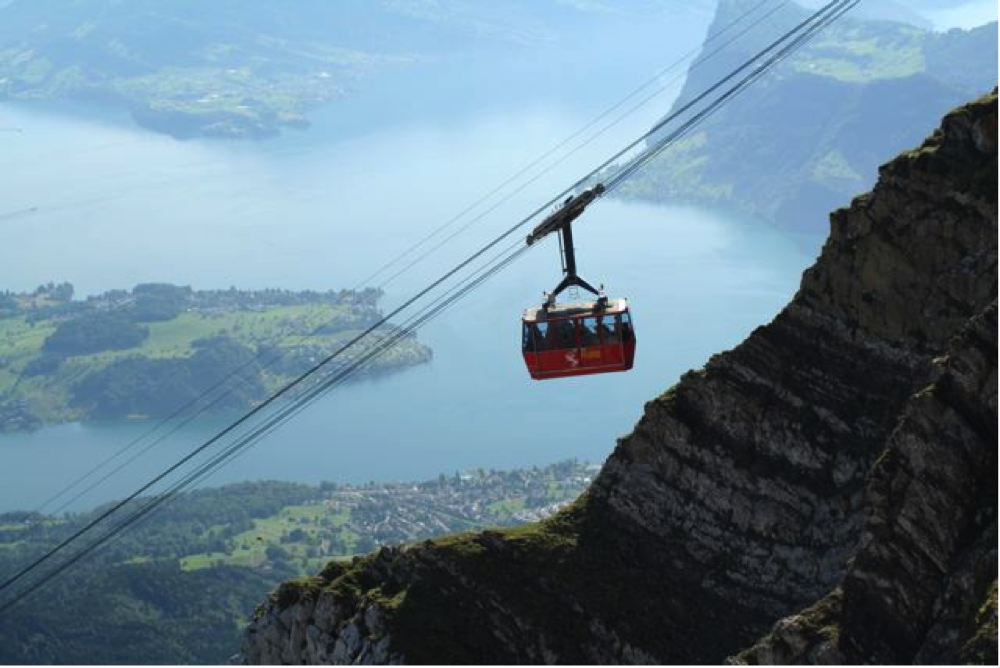 US Presidential Election 2020
Breaking news, analysis and the latest polls on the presidential race from HuffPost’s politics team
See More
Voting Made Easy
Register to vote and apply for an absentee ballot today
Register now
More:
travelSwiss Alpsswitzerland
Newsletter Sign Up
An essential daily guide to achieving the good life
Subscribe to our lifestyle email.
Successfully Subscribed!
Realness delivered to your inbox