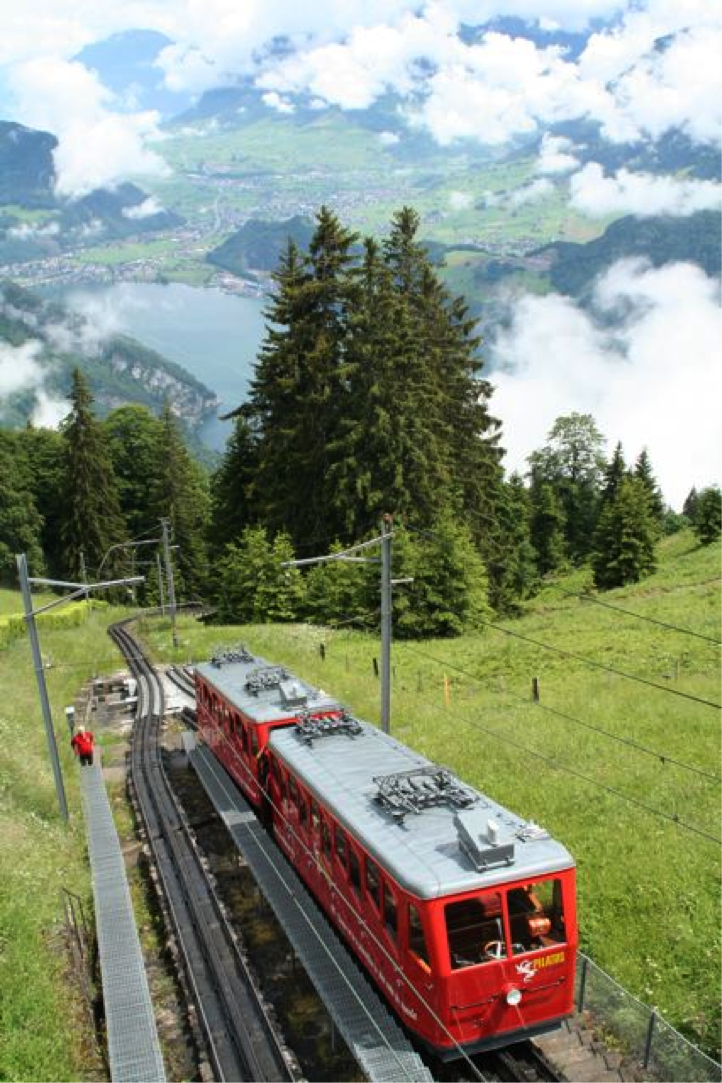 Perhaps no rail line in Switzerland is more sublime than the Pilatusbahn, more than a hundred years old and powered by steam until 1937, when electric cars were introduced. 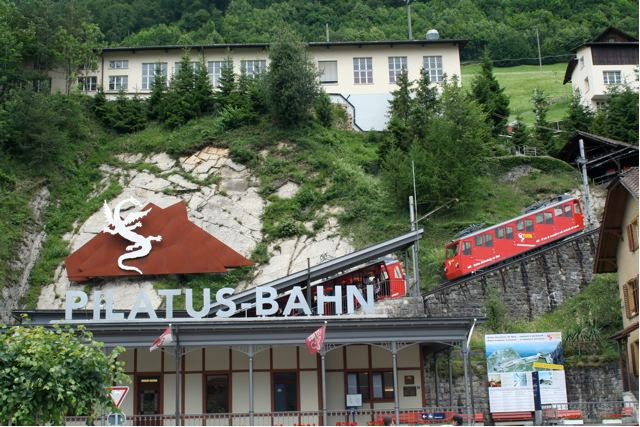 And if there is a beast that could be called sublime, it is the dragon. The village of Alpnachstad and this mountain are festooned with the Pilatus logo, which though supposed to be a fire-breathing dragon looks more like a salamander with wings. There, at the Valley Station, I climb into a bright red, parallelogram-shaped railcar (designed to "lean" uphill) and hang on, back pressed against the seat, for the delightful horror of a thirty-minute ascent. Longinus wrote of poetry that was "ravishing and transporting," and this ride qualifies, with its cadence of the thud-clack of the cog wheels locking onto the toothed track as we snail in and out of the mountain, over rushing creeks and dark gorges, past sheer cliffs and ogre-like outcroppings. There in the middle distance is a small herd of chamois, the protected, goat-like animal native to the Alps. Before the cult of the Romantics, alpine piles such as Pilatus were merely protuberances, barriers, and impediments to agriculture. When early geographers pointed at the peaks and asked what they were called, locals replied alpes. But this referred only to the high-level pastures on which they grazed their stock. The old Swiss peasant name for the Alps is Geissbergen, literally "Goat Mountains," land purposeful only for pasturing tough meat.

I've penned a few books that have been placed in the category of "wilderness travel." But perhaps the first to stock this shelf was the eighteenth-century mountaineer Horace-Bénédict de Saussure, who wrote in his opus, Voyages dans les Alpes, that the chamois hunters of the Alps experienced a certain delight in their dangerous profession:

It is these very dangers, this alternation of hope and fear, the continual agitation kept alive by these sensations in his heart, which excite the huntsman, just as they animate the gambler, the warrior, the sailor and, even to a certain point, the naturalist among the Alps whose life resembles closely, in some respects, that of the chamois hunter.

As someone who has spent some time exploring wild rivers in remote corners and who holds the distinction of having capsized on six continents, I know this notion -- that life is more intensely lived the closer one gets to its extinction. We never feel so alive as when we have nearly died.

Upward we creep at six miles an hour on a track built on a wall of granite blocks. We move like an underwater runner from the dark and spiry pine forests of the base past the timberline to the snow-dusted, rocky outcroppings of the seven-thousand-foot shoulder. The continual agitation, the swaying rhythm of hope and fear, fear and hope notwithstanding, somehow it doesn't seem right to climb this high without any panting or pain. But travel by train does allow a feeling of something beyond the merely functional or utilitarian.

The mountain, however absurd it seems, is named for Pontius Pilate, the Roman governor of Judea who presided over the crucifixion of Jesus Christ and, according to tradition, later committed suicide in prison rather than face the prospect of death at the hands of Emperor Tiberius. Legend has it that each time the Romans tried to dispose of Pilate's body, weighed down with stones, in various rivers, including the Tiber and the Rhône, fierce storms swept in and wouldn't stop until the corpse was retrieved. The Romans considered the Alps inhospitable, arduous, horrid -- ocris, arduus, horridus. The Roman poet and philosopher Titus Lucretius Carus, about a half-century before Christ, called the Alps the waste places of the world, where nature had swept its rubbish. And so such seemed the place the Romans might rid themselves of this curse at last.

They carried the body up an isolated mountain in Switzerland, a peak then known as Frakmont, and left Pilate's remains in a dark lake near the top. For good measure, his wife, Procla, was tossed into a nearby pond.

But Pilate still caused trouble, and storms still blew, so Lucerne authorities banned the ascent of the mountain. When six clerics tried to climb the hill unaided in 1387, they were imprisoned. There was a belief that every Good Friday, Pilate's tormented spirit would float to the surface of the lake in an attempt to wash his hands of Jesus's blood. But it's hard to validate. Supposedly, all those who saw the specter died within a year.

Stories transcend history, and though dozens of mountain places in the Middle Ages boasted of the burial plot of the man behind the crucifixion, the claim of this one, with its evocative tales, took.

It wasn't until the sixteenth century that it was legal to climb the mountain's shanks, and to this day locals like to blame Pilate for the violent storms that not uncommonly break over the area.

Queen Victoria took on the beleaguered spirit of Pontius Pilate and assorted dragons in the summer of 1868, ascending halfway up the mountain in a sedan chair, the rest on a pony brought from England. It was her first trip to the Alps. Still in mourning for Prince Albert, she was persuaded of the virtues of such an expedition by her doctors, who were concerned about her withdrawal from society. She knew of Albert's love of Alpine scenery (he had brought her a pressed alpenrose from the slopes of nearby Mount Rigi) and eventually conceded the therapeutic qualities of the scheme.

She traveled incognito, pretending to be the "Countess of Kent." Arriving at the start of August, she settled into a pension in Lucerne and admired the vistas that were so much grander than anything on the isles. She wrote in her diary:

What am I to say of the glorious scenery of Switzerland; the view from this House which is very high is most wonderfully beautiful with the lake -- Pilatus, the Righi etc. I can hardly believe my eyes when I look at it.

Her little adventure helped bleach the long-held taboo and inspired her subjects in ever-increasing numbers to come "take the air" of this and other alps.

Once we dock in the gaping maw of the terminal station, I head out and step the palisade, the wind sharp and moaning. Guides, with a wink, say the sound is Pilate's ghost as he wanders the slopes searching for a route to heaven. But the sensations of sound and wind do not dominate here; instead, it is sight. Seventy-three alpine summits and six lakes can be viewed from this vantage. Looking across a sea of clouds, I'm seized by a sober intoxication from the view of the marching mountains of the Bernese Oberland: the Eiger to the left, then the Mönch in the middle, and the Jungfrau on the right. At the former, I spent time a few years back covering the climb by John Harlin III.

Legend holds that the Mönch ("Monk") peak is protecting the Jungfrau ("Virgin") from the nearby Eiger ("Ogre"). But to me, here at this viewpoint, it looks to be the other way around. "It is a good name, Jungfrau -- Virgin. Nothing could be whiter; nothing could be purer; nothing could be saintlier of aspect," wrote Mark Twain on his 1891 visit. But when I read this uncharacteristically sincere sentiment, all I can think of is Mae West's line: "I used to be Snow White, but I drifted."

There is, not surprisingly, a less romantic version. Jungfrau likely got its name because a convent once owned pastures at the foot of the mountain. Eiger -- famous for its killer north face -- could derive from the Latin acer, meaning sharp, or the old German ger, meaning a spear or javelin. And Mönch? Chances are its lower pastures were owned by monks. 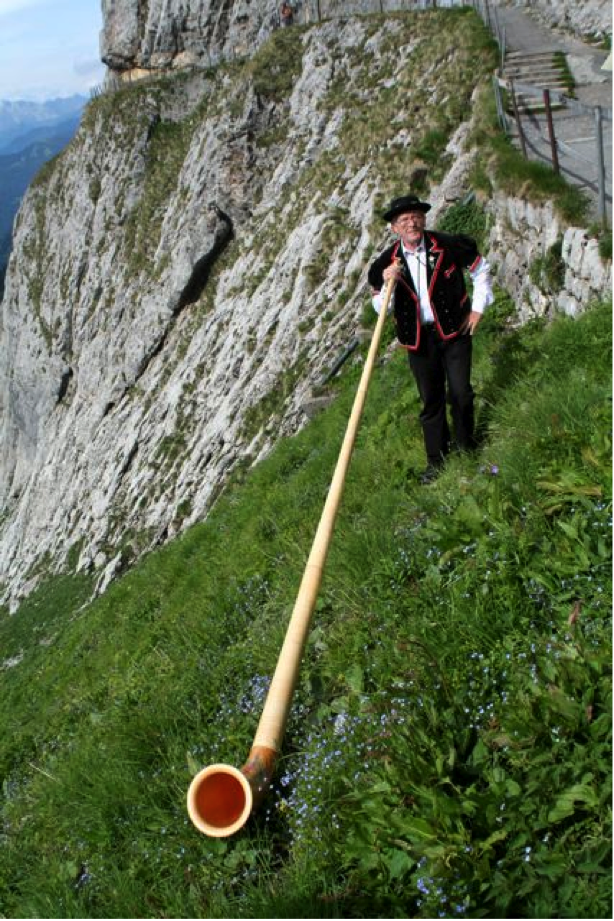 This is part one of a three-part series. Read part two