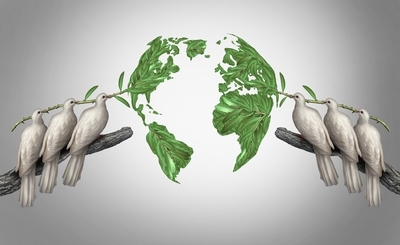 Although schools and post offices don't necessarily close for all national holidays, the citizens of each country usually pause -- at least for a few moments -- to remember, observe, or celebrate something in their nation's history that has special meaning to them.

Nations, however, are only part of the holiday phenomenon. Nations belong to regions. Regions belong to hemispheres. And hemispheres belong to the world -- a geographical entity that also celebrates holidays -- many of which are little known days of observance that tend to be ignored by most of the nation-centric citizens of Earth -- holidays, for example, like International Talk Like a Pirate Day, International Lefthanders Day, and International Chocolate Day.

Clearly, some of these global holidays are the work of over-caffeinated PR people trying to promote a product, service or cause most of us could easily live without. But there are other international holidays, consciously conceived and creatively executed, that definitely merit more attention no matter where you live.

One such day -- not yet officially recognized as a national or international holiday, but well on it's way -- is the International Day of Peace.

Established by the United Nations in 1981, this inspired day of observance is fast becoming a global celebration of planet Earth's biggest untapped resource -- peace.

Thousands of organizations around the world, both large and small, are dedicating their time and resources to supporting this effort - one that addresses both sides of the "peace coin" -- external peace (i.e. the end of aggression, violence and war) and internal peace (i.e. the individual experience of contentment, fulfillment and joy).

For example, Pathways to Peace, the originators of The International Day of Peace back in 1981, has been advocating for a better world for the past 33 years. Peace One Day, spearheaded by charismatic filmmaker, Jeremy Gilley (who convinced the UN to declare September 21st as a specific day of peace), has been an extremely vocal amplifier of the message. Words of Peace Global has been actively rallying support for Peace Day in 81 countries since 2011. And TPRF, a humanitarian aid organization has just released Citizens of the Earth, a compelling two-minute video featuring the words of it's Founder, Prem Rawat -- a video that will be showcased at many Peace Day events around the world on September 21st.

But for every global non-profit, there are thousands of smaller, local organizations also getting on the peace train.

PeaceCast, for example, has put together a worldwide webcast of peace-inspired news and entertainment that will begin in New Zealand (the first place on Earth where September 21st begins) and end in Hawaii 48 hours later (where it will still be September 21st).

A few thousand miles away, at the same time, Camino de la Paz, a three-month old grass roots organization in San Miguel de Allende, will be hosting a peace-themed music, art, healing, video, and spoken word event to kick start their effort to eventually bring peace to all of Mexico.

Large. Small. Old. New. Global. Local. The particulars don't really matter. What matters is the fact that massive amounts of human beings, regardless of their language, legacy, or location, are joining together and taking responsibility to communicate a message that very much needs to be heard these days - the message that peace is not only possible, but essential - and not just on paper, but in the hearts and minds of all seven billion people who inhabit this highly challenged planet of ours.

Want to help with Peace Day? It's not too late. There are plenty of organizations who would love your support. If you don't have the time or interest to volunteer, no worries. You can still tune in to what's happening by clicking here on September 21st for Peacecast's livestream broadcast or here to tune into Unity Foundation's livestream broadcast.

Mitch Ditkoff is the Co-Founder and President of Idea Champions, an innovation consulting and training company, headquartered in Woodstock NY. He is also a big believer in the inspired words of Margaret Mead: "Never doubt that a handful of concerned citizens can change the world. Indeed, that's all that ever has."