Here, amid the glittering ruins of globalized gentrification's gilded age, a kind of glocal tenants' movement is taking shape, at once locally rooted and globally connective.

On April 6, 2008, a gathering of global dimensions was afoot on the steps of New York's City Hall. You may have missed it at the time. You may have been hard-pressed to find it on the news.

That day saw the launch of the International Campaign in Defense of El Barrio, spearheaded by a bottom-up community organization of more than 600 immigrant and low-income families facing displacement from their homes in East Harlem: Movement for Justice in El Barrio (MJB), or The Other Campaign New York (after Mexico's La Otra Campana). 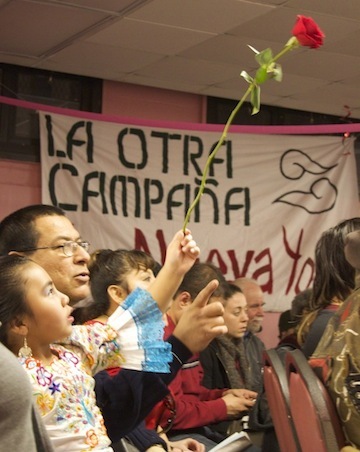 Thousands of miles away, the executives of the London-based Dawnay, Day Group--the private equity firm that had just purchased 47 buildings (or 1,137 homes) in East Harlem as a beachhead in a bid to build a $5 billion real estate empire here--could hardly have foreseen the ignominious fate that awaited their overseas investments.

Two years, countless protests, a landmark lawsuit, and a global financial crisis later, the Movement was still standing, while Dawnay, Day had gone the way of Lehman Brothers and its East Harlem properties had fallen into foreclosure.

(Most recently, MJB mounted a successful legal challenge to the company retained to manage the buildings, and a campaign to block a nonprofit landlord with a record of gentrification from buying them out.)

Now, having outfought absentee landlords from Harlem to London, outmaneuvered unfriendly politicians (including City Councilor Melissa Mark-Viverito), and outlasted the predatory equity boom of the 2000s, MJB is taking community organizing to a new level of global sophistication.

The scope of the movement was on vivid display one Sunday evening in February, nestled in the basement of an East 116th Street community center, at what was billed as the Third Encuentro for Dignity and Against Displacement.

Here were the hosts of the evening, the members of MJB leading bilingual chants and exchanges among the hundreds of activists and more than 40 groups that had crowded into the basement from a cross-section of local neighborhoods: ("New York City is not for sale!")

Here were young representatives of the South African Shack Dwellers Movement (Abahlali baseMjondolo), video skyping in to the encuentro from townships in Cape Town and Durban, where residents are resisting forced displacement ahead of the 2010 World Cup. 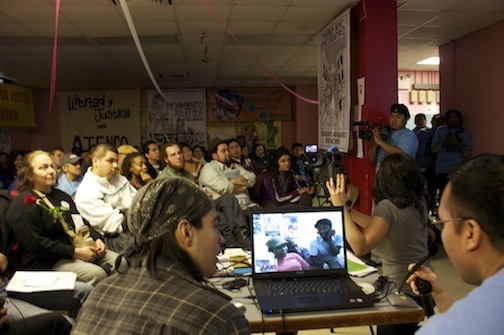 "They say the Apartheid era is over," explained Mazwi Nzimande, a high school student from the "Joe Slovo" slum, "but there is a new Apartheid system that is operating in South Africa, and the Apartheid is between the rich and the poor."

Speaking to those assembled on 116th Street, Mazwi continued, "I want to let you know that you are not alone...and that it doesn't matter that those on top are strong. We are stronger and we will keep fighting and we will win."

In response, members of MJB broke into chants, in Spanish, of "Long live South Africa!" "You are not alone!" "Here, there, the struggle continues!"

Here, too, at the encuentro, was the People's Front in Defense of the Land (FPDT), out of San Salvador Atenco, Mexico, crossing the border (so to speak) to join the videoconference. 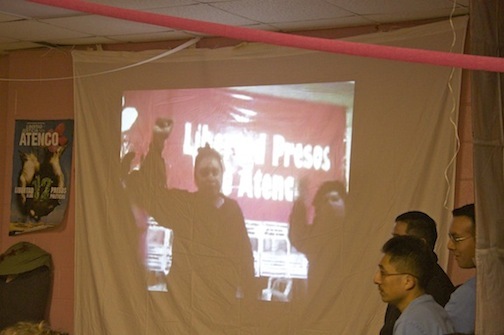 Residents of Atenco have faced violent repression for defending the community from attempts to replace it with a commercial airport--a police riot in 2006 left two youth dead, 26 women raped, and 12 political prisoners who remain behind bars.

MJB responded last year by shutting down the Mexican consulate. Amid footage from the takeover, FPDT leader Trinidad Ramirez del Valle observed, "Distance, borders cannot keep us from fighting back against such injustice...We are filled with happiness to see how many are supporting us. We know our struggle is just and dignified." 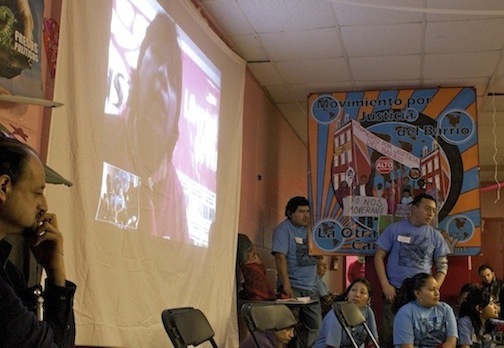 Messages of solidarity flitted back and forth, on and off the screen, from continent to continent but also from neighborhood to neighborhood:

Here was Nellie Bailey of the Harlem Tenants' Council, speaking against the rezoning of 125th Street; here was Tom DeMott of the Coalition to Preserve Community, against the Columbia expansion; here was Javier Salamanca of the Sunset Park Alliance of Neighbors, against high-rise development.

Here, too, was Dahoud Andre, a Brooklyn-based Haitian activist with Lakou New York who had just returned from a grassroots mission to the scene of the man-made disaster that has left 300,000 dead and a million homeless since January 12:

"Haiti is not so much in the media as it was, but the tragedy continues. The problem is shelter."

Dahoud had advice for those who wish to support Haiti's displaced: "Support your local community organizations. Not the big ones, such as the Clinton-Bush Fund. These are the people responsible for destruction in Atenco, Haiti, and Harlem. We do not expect solidarity from them. The solidarity we expect is from the grassroots, from our true friends. We expect it from you guys."

The encuentro concluded with the traditional smashing of the "neoliberal pinata," which, this year as every year, drew an eager crowd of rebel children of El Barrio. One after another, they struck, and they struck, and they struck again, with all the might in their little arms, until the ghastly green monster burst apart at the seams and the sweet candy rained into their hands. 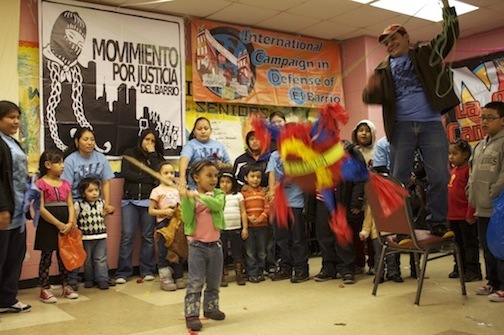