The Chinese government has launched a sweeping crackdown on drugs this year, including random drug testing in bars and aimed particularly at the entertainment industry. In the past couple of months, 11 celebrities have been detained by police. 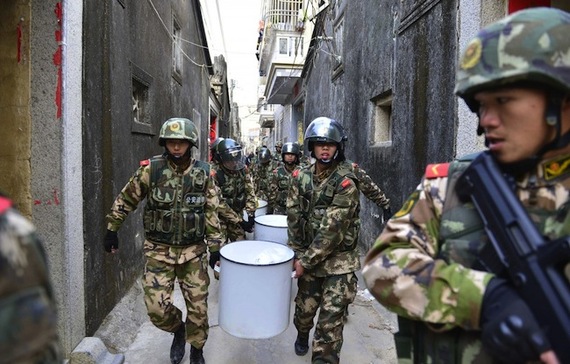 Jaycee Chan, the 32-year-old son of Jackie Chan, and Ko Chen-tung, a 23-year-old Taiwanese actor, were among those arrested. Fellow residents at Chan's central Beijing apartment building had tipped off the police, and both men tested positive for marijuana.

Chinese society was shocked by the news. People here tend to think that "good kids don't use drugs." And despite a growing consensus in the US and elsewhere that the war on drugs has failed, China remains firmly set on a prohibitionist path.

Beijing's targeting of the entertainment industry is deliberate, with the intention of using high-profile arrests to issue a warning to wider society. The message is: No matter who you are, drug use is unacceptable. President Xi Jinping's avowed intention to "harshly crack down" on drugs, hedonism and extravagance among China's rich can also be seen as a way of responding to public dissatisfaction over the country's growing wealth gap.

On CCTV news, we watched Ko Chen-tung burst into tears, expressing his regret for his wrongdoing. Whether the filming of this humiliating scene took place with his consent is doubtful. Either way, the arrested stars have now become spokespeople and negative role models for the government's anti-drug campaign.

But behind these media-driven operations, China is facing an increasingly difficult reality around drugs. Nationwide there are 2.58 million registered drug users. But the actual number of people who use illegal drugs regularly, while unknown, is a great deal higher -- perhaps 12 million or many more.

People who use heroin account for about 60 percent of registered drug users. But the number of people who use synthetic drugs like methamphetamine, ecstasy and ketamine is rising -- and these people tend to be younger in age, from more diverse economic backgrounds and harder to count than the heroin users. China's rapid economic growth has created a vast middle class, and synthetic drugs are more and more popular among these white collar workers and entrepreneurs.

Community groups also report that crystal meth use is common among sex workers and their clients (a 2009 paper estimated that up to 10 million female sex workers in mainland China regularly see over six percent of the male population aged 20 to 64). Often, clients require meth to be used and pay extra for this. Meth sex often involves more than two people and is often unprotected, greatly increasing the risk of HIV infections. The total number of people with HIV in China, vaguely estimated at 1.5 million or more, is unknown. But back in 2009, a government report acknowledged HIV/AIDS as the country's leading cause of death among infectious diseases.

China's drug policy fails to keep up with either its economic success or its developing drug preferences. Marginalized drug users lack resources and services, and the government offers virtually no strategy or effective interventions to help reduce harms. Instead, drug use is viewed overwhelmingly as a legal problem, and draconian law enforcement is the primary response.

In 2013, for example, Guangdong province in the south launched the "Thunder Anti-drug" special action, through which 97,200 drug users were detained and 47,400 people were sent to compulsory detoxification centers. This year it's Beijing's turn for zero tolerance.

Drug possession for personal use is technically classified as a minor administrative offense in China, but the punishment ends up being very harsh all the same. In addition to a 2,000 RMB ($334 US) fine and up to 15 days' administrative detention, the public security organ can send people who are deemed to be drug addicts to a compulsory detoxification center for up to three years -- plus up to three years' "community rehabilitation."

"This is basically six years in detention," as one Chinese drug user told me. And all of these penalties can be imposed purely at the discretion of the police, without going through a court.

Chinese policy aims to detect drug users, but provides very limited treatment for people who are addicted. The government has scaled up its methadone program rapidly in the last few years but the coverage is still low: The 2011 numbers show 716 clinics serving 133,000 people. There is a severe lack of community-based, voluntary and effective treatment, and the main official response to opioid use is compulsory detoxification.

A survey conducted in 2012 interviewed 200 people who had been released from compulsory detoxification centers. It found that 144 (72 percent) of them had been sent for compulsory detoxification more than twice. The interviewees reported spending most of their time in the centers working -- typically manual labor such as manufacturing bags and other small items. Although detainees do now get paid to work (since the enactment of the 2008 Drug Control Law), they have little access to antiretrovirals, methadone, addiction treatment or psychological support.

By 2012 there were 248 compulsory detoxification centers in China, holding half a million detainees. In March that year, 12 UN agencies issued a joint statement calling on countries with such centers, which have been shown to foster human rights abuses and threaten the health of detainees, to shut them down. But China's policy still revolves around them.

Although the country abolished its Re-education Through Labour (RTL) system -- a network of 300 camps for the punishment of a range of minor offenses and political dissent -- at the end of last year, some former RTL facilities have now simply been turned into compulsory detoxification centers.

Advocacy and community groups are concerned about this development. Apart from the continuing ethical issue of compulsory detention, the former RTL system's prison-like facilities, like the detox centers, do not have the capacity to deal with the complex psychological and health needs of people with drug problems. It will require many resources and much time to equip the facilities and their staff adequately.

Wu Zunyou, head of the National Center for AIDS/STD Control and Prevention, defends China's compulsory detoxification centers by arguing that locking up drug users prevents them from inflicting more crime on society. It's an argument that will sound familiar to readers in the US (which still incarcerates more people than any other country in the world, China included).

But unlike the US, China's culture emphasizes the collective benefits of society over the freedom and rights of an individual. And this is reflected in policies and practices.

If you are detained for using or selling drugs in China, your personal information is entered into a huge database, managed by the Ministry of Public Security, where it is held indefinitely. The consequence is that drug users or former drug users -- even those who quit years ago -- are hunted by the police wherever they check in using their ID. The database links with hotels, airports, internet cafés and numerous other locations. Police can appear suddenly, any time, and require you to take a urine test.

Wang Wen, a 48-year-old drug users' rights activist, had not used drugs for more than 10 years when he traveled from his then-home in Yunnan province to Beijing on a business trip in 2011. Having identified him through the database, the police broke into his hotel room at 3 am and took him to the police station for a urine test and questioning. The result was negative and he was released -- but Wang Wen's business partner broke their collaboration after learning of his previous drug use. Following this incident Wang Wen launched a lawsuit against the Beijing Xicheng District Public Security Bureau, but the case failed.

Chinese law technically protects people who use drugs from employment discrimination. But plenty of specific obstacles exist -- a 2012 regulation issued by the Ministry of Public Security excludes anyone with a drug use history from working as a school bus driver, for example. And during the recent crackdown against the entertainment industry, thanks to government pressure, the Beijing Performance Industry Association and 42 agencies and performance groups signed the "Beijing Entertainment Industry Anti-Drug Pledge," promising not to hire or work with any artists who use drugs.

Harsh punishments, public humiliations, social exclusion and inadequate treatment are doing nothing to help China deal with its drug problems or respect its citizens' rights. But Beijing's attitude, which has solid support among sections of the Chinese population, ensures that those of us working to improve this situation have a long, hard road ahead.

Shen Tingting lives in Beijing and is the advocacy program director for Asia Catalyst, an NGO campaigning for the rights of drug users, sex workers and people with HIV/AIDS.