Ahhhh, the holidays. Well, they're not here yet, but they sure are creeping up on us. And what do we all associate the holidays with? Well, besides scrambling to buy the most unique and thoughtful Christmas gift for your significant other (no pressure)... that's right... movies! Of course, family and friends are pretty good, too, but I'm pretty sure we need to make sure you have your viewing schedule lined up for all those free hours in between meals.

Over the years, there have been many films that have tried to capture the spirit of the holidays. Some of those have been hits and some of them have been misses. Huge misses. Then there are those films that don't really revolve around the holidays, but take place during that time and, as such, have become synonymous with the season. Between these two types of categories, there is a solid selection of flicks for you to have prepped for your approaching free time.

I've crafted the perfect list here to bring you all the basics; your Christmas movies, your Thanksgiving movies and your awesome movies that happen to take place during the festive season. Follow this list and you'll never groan about the holidays again. 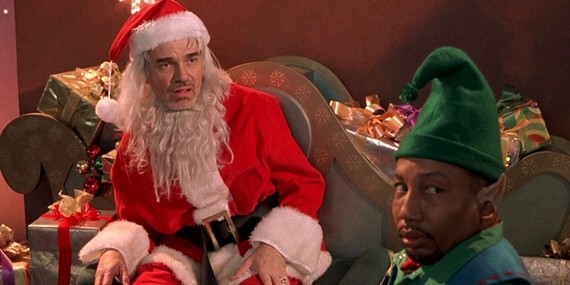 This seems like a great place to get started. I know that this is not up there with the first in the series, or even the European Vacation sequel, but this still hits some hilarious notes. From Randy Quaid's fake turtleneck, to Julia-Louis Dreyfuss' yuppie neighbour schtick, we get a solid does of classic 80's-90's humour. But we also get those warm holiday moments where it all comes together to make us believe in the spirit of Christmas...even if it required some hostage taking.

Talk about an instant classic. When this film came out in 1990, it was a box office sensation. Never mind the fact that the great John Hughes wrote it, it launched the biggest child star career since Richie Rich graced the comics. For a little tyke, Culkin has amazing comedic timing and expressions that will generally make you laugh out loud as he single handedly annihilates two criminals trying to infiltrate his home (played with great over-the-top zeal by Joe Pesci and Daniel Stern). And if that doesn't sell you, well good luck not choking up when little Kevin finally sees his mom at the end.

This is easily the ultimate Christmas classic for any child of the '80s. Even if you missed that time period, there have been numerous re-releases because this film is an undisputed classic for the ages. One child's obsession with getting his one dream gift, the Red Ryder B.B. gun, string the whole mess together, but along the way we are all reminded of just how everything about our families can become polarized during the holiday season. If Ralphie's plight does not resonate with you then you either skip Christmas or you don't have a heart. Either way, this is required viewing you cold hearted jerk.

Probably one of the most offensive holiday films ever made, Bad Santa still manages to make you get that ol' magic feeling by the end. It may be tough to watch Billy Bon Thornton as the scoundrel Willy, a man who poses as Santa to rob shopping malls in the after hours, but it is even tougher to keep a straight face. Add a sexy appearance by Lauren Graham, the funniest kid you've ever seen, and the angriest dwarf you've ver encountered and you have the makings of comedy gold. There are many raunchy moments here, but the film's central arc is Willy's relationship with this sad, lonely kid that keeps the film from spiralling into pure debauchery.

Stop scowling. This film is exceptional in what it sets out to do. There are at least six different stories going on in here and they all overlap in genius, and subtle ways... each one which brings its own great message about love and the role it plays in all our lives. This is probably one of the best date movies ever, so if that is all you need over the break, then let this one be it. Alan Rickman, Emma Thompson, Hugh Grant, Colin Firth and a host of others bring serious acting pedigree, while director Richard Curtis has managed to make something here that is now on most people's holiday viewing list.

This is one of the funniest moves ever made. I watch this every Christmas with a buddy of mine and we call it a Christmas movie. In fact, it really is a Christmas movie as the season plays a big part in many scenes and even some motivations for some the leads. Leads? Oh. Just Eddie Murphy and Dan Aykyroyd at the top of their games. These days, it would be tough to make a movie with this subject matter and racial humor, but back then it all worked. If they ever try to reboot this, you will find me hiding under a table in a cabin deep in the woods.

I had to put one of the incarnations of this story on this list. There are many to choose from, but this is at the top of my old DVD pile in the country house for a reason. Bill Murray's Frank Cross is a wonder to behold in all his manic, malicious and, ultimately, redeemed behavior. Richard Donner's effects and strategy help this film never slow down and allows for Murray to really go for it. We all know the story, but bringing it into a contemporary setting and having Cross be an executive peddling trashy television content to the masses really fit the themes well. With a little help from Bobcat Goldthwait as the unlucky recipient of much of the abuse, the final act is downright awesome.

I miss John Candy. I really do. Whenever I watch this movie it is such a stark reminder as to how talented he was and how much range the man had. Pairing him with Steve Martin in a film by John Hughes is just almost as perfect as a holiday themed movie can get. This is not a Christmas movie, though. Martin is trying to get home for Thanksgiving and he just can't seem to get there on his own and becomes saddled with Candy's overbearing and over-friendly shower curtain ring salesman, Del. The journey is hilarious and the final sentiments hit the nail on the head about friendship and family. This is an all time classic, gents.

Will Ferrell plays a human who was raised as an elf. It's directed by Jon Favreau. Watch the trailer and you tell me if this should not be compulsory viewing during the coming months. If you only have room for one extremely Christmas heavy film during your build up to the 25th of December, then let this one be it.

I may be biased here because these are my favorite movies of all time. And to be fair, these are not your basic Christmas movies. But this list is not simply about finding the best Christmas movies as much as it is about finding the best films that have some of that holiday spirit at heart. And John Maclane's first two movies fit that bill. In both of these, our hero is trying to make some family time around the season and he gets interrupted by terrorists or thieves or just basic bad guys. In case you missed it, these guys are a metaphor for our own metaphysical obstacles that impede our ability to reconnect with the important things this time of year. Sort of. But who cares? These flicks rock and make for some fun holiday TV time.