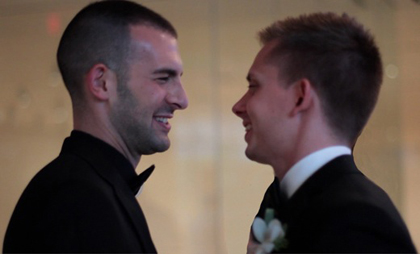 The first Pride & Groom episode follows Mitchell Cook and Paul Neenos on their journey to wedded bliss. It's an intimate depiction, showing everything from their engagement to creating invitations to choosing flowers to the emotionally charged issues the couple face with their families as they prepare to spend the rest of the lives together.

When I asked the filmmakers what they hoped to accomplish with Pride & Groom, Josh, who is also Senior Vice President of Original Programming at Here TV, stated, "We were looking to accomplish several things. One is to commemorate the year anniversary of marriage equality in New York state, as well as pointing out some of the unforeseen, interesting challenges along the way." Keren added, "Mainly I think that everyone can relate to this story, gay or straight, and I think that is very important. If they can't relate to it, it is important for them to see an ordinary couple going through all the drama that occurs when people decide to get married. I know that it's a very normal story but also a very special story."

For more information, and to watch Pride & Groom, visit heretv.com/prideandgroom.