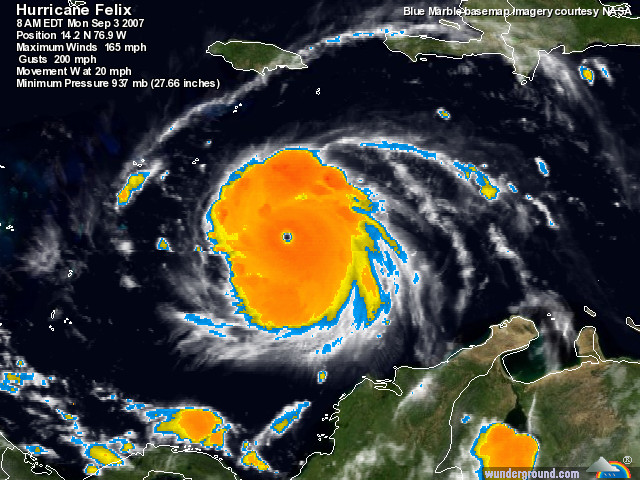 [Hurricane Felix, a Category 5 in the Caribbean. Image courtesy of the Weather Underground.]

Last night, Hurricane Felix explosively intensified over the Caribbean Sea, so much so that a reconnaissance aircraft in the storm had to abort its mission due to "extreme turbulence" and dangerous pelting by snow pellets. But before fleeing the vortex, the plane determined that Felix's winds were at least as strong as those of Hurricane Dean two weeks earlier--making Felix the second Category 5 hurricane in the Atlantic region this year.

Indeed, every Atlantic hurricane so far this year has been a Category 5.

Now repeat after me, kids: No single hurricane says anything definitive about global warming. Still, we can consider Hurricane Felix in a broader context by surveying the complete known history of the strongest Atlantic storms. That exercise reveals the following facts:

* There have now been 8 Category 5 Atlantic hurricanes in the past 5 years (Isabel, Ivan, Emily, Katrina, Rita, Wilma, Dean, Felix).

* There have been 8 Atlantic Category 5 hurricanes so far in the 2000s; no other decade has had so many. The closest runner up is the 1960s with 6 (Donna, Ethel, Carla, Hattie, Beulah, Camille).

Granted, the decadal comparison presented in the final bullet point comes with some caveats. I'm sure we missed some Category 5 storms in earlier decades due to deficiencies in our observing systems; and the borderline between Category 4 and 5 is hazy to begin with. Still, I don't think anyone could deny that we're seeing a shocking number of Category 5 hurricanes lately. And if the 2000s continue to be hyperactive for Atlantic hurricanes, it will grow tougher and tougher to dismiss the idea that we've arrived at a scary new place.

To be sure, it might be the case that there's a natural up-and-down cycle in the Atlantic for intense hurricanes, and we're only now seeing a peak comparable to the 1960s. Some scientists would argue that point, and the evidence presented above is not sufficient to refute them. You'd only have to reclassify two hurricanes from the 1960s in order to have just as many Category 5 hurricanes during that decade as we've seen so far during the 2000s. The 1960s were very busy for strong hurricanes, period; and so were earlier decades when our observations were even less reliable.

But nevertheless, I can't get over these numbers: The 1980s saw three official Category 5 hurricanes. The 1990s saw two. The 2000s, so far, have seen eight, all clustered from 2003 to 2007. In this context, the past five years certainly look like a scary anomaly compared to what has come before. And while that might be all that we can say definitively at this point, I think it's worth remembering something that Thomas Kuhn noted in his famous book The Structure of Scientific Revolutions: When enough scientific anomalies accumulate, they can sometimes force a paradigm shift.

[For a more thorough discussion of Hurricane Felix and global warming, see my latest "Storm Pundit" entry over at The Daily Green.]