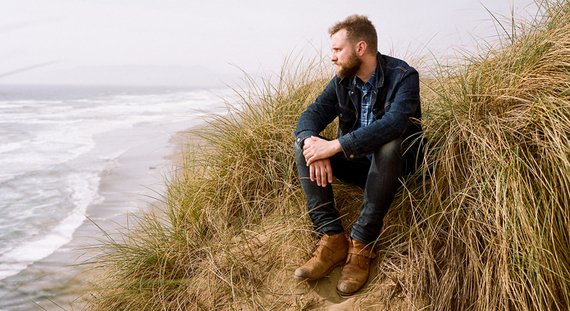 Have you ever felt lost? It's that feeling you get when you wake up in the morning and realize you're not living the life you intended. You try to block out the feelings, but something inside of you just can't cope. You have two choices. You can continue down a path that leads toward regret or you can pursue the passion that drives you. Pursuing passion is what Chris Ozer did.

Chris Ozer is a professional photographer, but his plan and his journey didn't start out this way. Some of his client's include Cole Haan, Evernote, Facebook, Nike and Samsung just to name a few. After a career as a jazz musician and music teacher didn't work out, Chris accepted a desk job where he worked for five years struggling to keep his head in the game. It wasn't for him and something inside of him drove him towards something bigger and better.

In October 2010, Chris discovered a new iPhone app. The app was called Instagram, and it would change his life forever. What started out as a casual app he used to snap pictures here and there, turned into a passion that was unintended. Almost by accident, Chris discovered a talent and passion he never fully realized. While working his nine to five, he spent every spare second studying design, marketing, branding and photography. As he began perfecting his skills Chris began getting paid photo gigs. After exhausting his vacation time working these gigs, Chris came to that pivotal point in every artist's/entrepreneur's career where they must decide to take the leap of faith or continue sitting on the sidelines. Chris decided to take the leap of faith. "When I left my desk job I had enough photography gigs lined up and savings to last me about three months -- not very much! It was a huge risk but has paid off in ways I couldn't have imagined."

Chris's story represents an archetype that is often glorified amongst the inner-circle of entrepreneurs, freelancers and creative types, but often overlooked by the mainstream. It's a story of passion, hard work, dedication and triumph.

In life we tend to look at the success of others and wonder if our story could ever resemble theirs. So many people turn the other cheek and accept a life of mediocrity, but it doesn't have to be this way. Chris Ozer proves that where there's a will there's a way.

Icanbesociety.com chronicles the stories of Internet elite's like Chris Ozer, who have turned their passion into a lucrative business. I had the opportunity to interview Chris, where he shared his story and encouraging words of wisdom for aspiring photographers.

When did you join Instagram and what intrigued you about their social network?

I joined Instagram the first day the app was publicly available in October 2010. I became aware of the app through Jack Dorsey's (twitter founder) twitter feed. He was a beta tester for Instagram and would tweet links to his Instagram photos before the app was available to the public. I remember seeing photos of his -- edited with the original Earlybird filter, including borders -- and thinking, wow that looks so cool! I was very much into iPhone photography editing apps at that time and assumed Instagram was just another app that allowed you to run your photos through filters. I downloaded the app, created an account, and posted my first photo that same day (a poorly composed photo of the corner of Bond and Lafayette St in New York that I shot while walking to the train from work, also edited with the Earlybird filter), not even understanding what 'posting' the photo meant. I really had no idea it was a social network and was pretty floored when people started following me right from the get-go. I think my first photo had something like 10 likes on that first day and I thought, who are those 10 people? There was something powerful about the app from that first day.

Have you found success with other similar photo sharing/hosting communities?

Yes, I use both tumblr and VSCO Grid to share photos and am very active on both platforms. I like all three platforms for different reasons.

You currently have over 565,000 followers on Instagram. What do you attribute this following to?

I was very active on Instagram from the beginning, primarily posting photos just for fun and following others whose work I admired; I had only been a hobbyist photographer up until that point. I owned a DSLR and was intrigued by it but didn't really understand how to operate the camera. iPhone photography and Instagram became a great outlet for me to learn and practice the craft of photography without having to worry about f stops, ISO, and shutter speed, and really just focus on composition, lighting, subject, mood. Something really clicked for me though in the Fall of 2011 and I became more serious about the craft. I made a conscious decision to improve my skills and just began studying photography and shooting like crazy. My photos slowly got better and better and this is when I began getting a following on Instagram. I went up to about 45,000 followers and at that time I was lucky enough to be placed on Instagram's suggested users list. That helped my following gain quite a bit, to where it is now. I'm incredibly thankful for this exposure as it has helped grow my career tremendously.


If the tools available to promote your brand/business online such as Instagram weren't available, how would this have impacted your business?

All I can say is that Instagram, in addition to tumblr and VSCO, have given me tremendous exposure. Exposure is what every brand needs and if I hadn't gotten that exposure then I don't think my career would be where it is today. Instagram has helped accelerate my career in ways that I'm eternally grateful for.

Michael Price is an entrepreneur and author of What Next? The Millennial's Guide To Surviving and Thriving in the Real World endorsed by Barbara Corcoran of ABC's Shark Tank. An advocate of ideas for radical change, he has received critical acclaim for his lessons in education, career, entrepreneurship and personal finance.