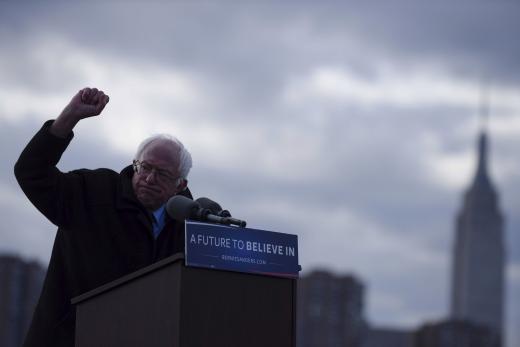 Bernie Sanders' wins in West Virginia and Nebraska show that the fight for the Democratic nomination isn't going to be over until the California primary next month.

After taking the Democratic vote in West Virginia and Nebraska from former Secretary of State Hillary Clinton in the primaries, Sanders is looking forward to sweeping Kentucky and Oregon as part of his predicted "May winning streak." While this may sound ridiculous to some, American voters are still feeling the Bern and well, so is Sanders himself.

His fight til the end for the Democratic candidacy is commendable, considering that so many people, including the rival Clinton camp, think he doesn't stand a chance at winning.

That Crazy Bernie Working 16 - 18 Hours a Day for Regular Americans Like You & Me. @BernieSanders #CaliforniaPrimary pic.twitter.com/bn4VWodXId

Even though Clinton is winning the delegate numbers overall, Sanders' supporters prefer him to Clinton over Trump, as a recent Quinnipiac poll on the swing states of Florida, Pennsylvania, and Ohio suggested. Basically, it seems that voters prefer Sanders much more over Trump, who is neck-in-neck with Clinton as the Quinnipiac poll demonstrates.

In an interview with NPR, the Vermont senator explained that he won't give up until the last primary in California on June 7, less than a month away.

Winning the California primary would be crucial for the Sanders campaign since the state has the highest number of Democratic primary delegates.

So, why won't Sanders give up?

"The problem, one of the main problems that we have, is that the establishment Democrats, of course, supporting all of -- virtually all of them are supporting Hillary Clinton," Sanders explained.

"I think that in those states where we have won landslide victories, those delegates should reflect the wishes of the people of their state and give us their votes," he said. "And then I think we have got to make the case to the superdelegates, who in many cases, were on board for Hillary Clinton even before I got into the race, that they should take a hard look at which candidate is stronger against Donald Trump. And I think we can make that case."

Most people, as in 95 percent, would benefit financially from a Sanders presidency. Ironically, Sanders' own tax return from 2014 nearly puts him in the top five percentile of income earners in the U.S. who would suffer the greatest loss from the senator's plans to reform taxes.

The American people understand that bringing people together will always trump dividing us up.https://t.co/zinFvUWYCj

Sanders is hoping to win the Democratic vote in California regardless, and confidently says his support in California from liberals and the working-class is so strong that he is considering pulling his television campaign ads off the air in the state.

Needless to say, Sanders is an optimist. He's hanging on for dear life, much to Clinton's dismay as she seems confused as to whether or not she should make her policies more left-wing to gain greater appeal over him, as The Washington Times reported.

Even if Sanders really doesn't have a shot at winning the presidential election, it's amusing to watch Clinton's reactions as she realizes how unpopular she is despite her purported presidential knowledge gained from being First Lady. Is he just trying to prove a point?