For Bon Appetit, by Rochelle Bilow.

Although we're suckers for a good bakery or homemade loaf, the pre-sliced, squishy bread that comes in plastic bags is convenient and cheap. It also makes excellent grilled cheese sandwiches. But some bread is good for you (nutrients!), while some breads wear a false health halo. Did you think "multi-grain" was a good thing? Think again. We spoke to a nutritionist to figure out how to buy the healthiest supermarket bread. 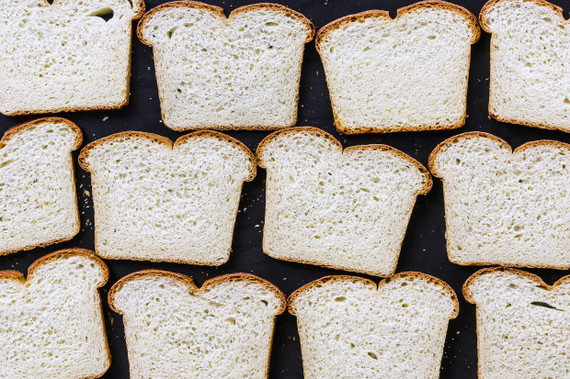 Wheat vs. Whole-Wheat vs. Multi-Grain vs...

Wheat
"Wheat" can look like the gorgeous, crusty sourdough loaf at your local bakery...or it can be highly processed, squishy, pre-sliced, reduced-calorie, preservative-packed bread. "If something simply says 'wheat,' it is an enriched product that has been stripped of beneficial nutrients. Some nutrients are added back but it is not the same as a whole-grain product," says Carrie Motschwiller, a registered dietitian and wellness manager in New York City.
Health rating: 🍞: For maximum nutritional benefits, the word "whole" should be somewhere on your package. Still, it's better than a candy bar!

Multi-Grain
This one sounds healthy, but it's often just smoke and mirrors. "Multi-grain is typically not the best choice and not an actual whole-grain product," says Motschwiller. Remember that unless the word "whole" is on the label, there's no guarantee that the grain contains all of its components. "Multi-grain" just means there's more than one type of grain (so, for example, non-whole-wheat and corn).
Health rating: 🍞 🍞: Although your multi-grain bread could contain essentially nutritionally-lacking flour, at least you're getting more than one variety of stripped-down grains?

Whole-Wheat
A kernel of wheat contains three parts: the germ, endosperm, and bran. White bread is stripped of the endosperm and bran (and, subsequently, most of the nutrition). Whole-wheat is made from flour that contains all three. That said, many commercially-produced whole-wheat flour breads are made by separating the elements, grinding them, then Frankensteining them back together, rather than grinding it all at once. The words "single-stream milled" indicate that all elements of the wheat kernel were kept together from start to finish, but this is rarely on bread packaging, though "stone-ground" is often a good indicator that the kernel wasn't separated when ground. Alternatively, Bob's Red Mill is widely available and keeps the whole grain intact.
Health rating: 🍞 🍞 🍞: Mmm, fiber.

Whole-Grain
Same deal as whole-wheat, except this label typically denotes a bread that's been made with a combination of wheat and other grains, like barley, rye, or spelt. Most store-bought bread (excepting gluten-free) contain at least some wheat, although you can sometimes find bread that's 100% rye, spelt, etc. Whole grains are your friend, unless, that is, you can't digest them. Says Motschwiller, "It is recommended (per dietary guidelines) to make at least half the grains you consume whole grains."
Health rating: 🍞 🍞 🍞 🍞: Whole-grain flour can simply be whole-wheat, but if it contains many different grains, all the better. Variety is the spice of life, after all.

Sprouted
Frequently found in natural and health food stores, sprouted breads are kept in the freezer or refrigerated section. We're fans of the Ezekiel brand. "Sprouted breads typically contain the entire grain (kernel, really) after they have been germinated," explains Motschwiller. Motschwiller adds that wheat is usually only one of many ingredients in this bread: "Often legumes and other grains are used, as well such as barley, oats, lentils or even soy." Sprouted bread is, by necessity, whole-grain (you can't sprout processed flour), so it comes with all of the same benefits. Studies have shown that sprouted grains contain less gluten "regular" grains, but it's debatable whether they boast greater nutritional value. Ezekial 4:9 is a popular and widely-available brand of sprouted bread, as is Dave's Killer Bread.
Health rating: 🍞 🍞 🍞 🍞 🍞: Whole-grains are key, and some folks say sprouted = easier to digest. You'll have to test that theory on your own. 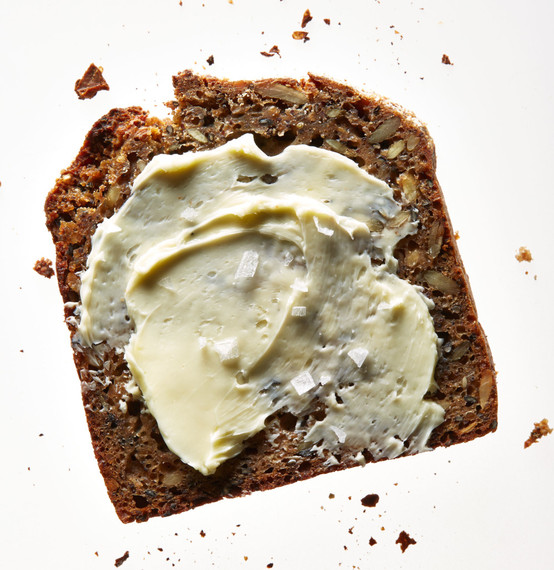 What to Look for...and Avoid

Fiber
Bread made from whole grains will contain fiber. You want at least 2 grams per serving--ideally 3-4. Fiber isn't just important for, uh, regulation. Motschwiller explains that it can help keep you fuller longer. The recommended daily intake is 25 grams for women and 38 grams for men.

Hydrogenated Oil
You may know this by its other name, "trans fat." Any product that contains trans fat must include the information on the ingredient label. Note, we said "ingredients" not just "nutrition facts." By law, food companies are allowed to list 0 grams of trans fat if it contains less than .5 grams per serving, Motschwiller explains.

Sodium
"Don't get me wrong, our bodies actually need some salt. The problem is that sodium is generally dumped into foods during processing to reduce spoiling and/or increase flavor." Think some, not a lot. Current dietary guidelines suggest less than 2,300 milligrams per day. That's about one teaspoon. Aim for bread with less than 150mg of sodium per slice of bread, says Motschwiller, and you should be in the clear.

Sugar and Sweeteners
"There should not be added sugar in bread; there is no reason for it," says Motschwiller. Often, store-bought breads contain sugar, honey, or molasses, to make the product more palatable to Americans' taste buds. In a nutritionally-perfect scenario, your bread should contain 0 grams of sweetener, although Motschwiller says she'd cap the amount at 4g per serving.

Preservatives
"Ideally, you do not want any preservatives. You want to be able to pronounce and recognize everything on the ingredients list," says Motschwiller. This is not impossible, although it does mean the loaf will not have an infinite shelf life. Start your search in the frozen/refrigerated section for the best luck.

A Word on Gluten...
Gluten is a protein structure found in many, but not all grains. Buckwheat, corn, and quinoa (technically a seed) are all naturally gluten-free. Gluten-free baking can be tricky to master, but there are now many commercially-available gluten-free baked goods on the market.

Now it's time to make sandwiches!

Wanna bake your own squishy bread? Right this way.

58 Dishes to Bring to an Outdoor Party