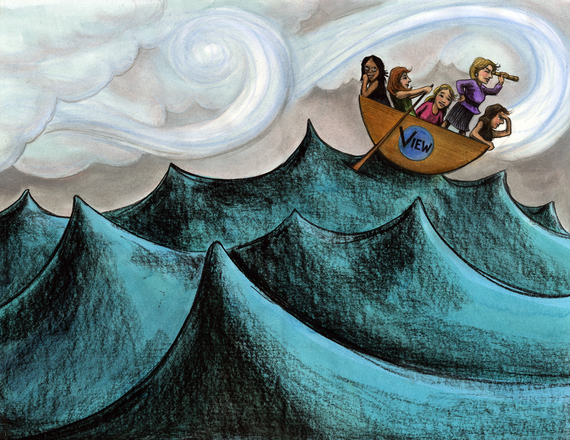 After a decline in ratings by 16 percent at The View, the daytime juggernaut will need drastic changes to survive another round of not so surreptitious beatings from competitors.

Now that Rosie Perez has signed off and word that Nicole Wallace will be shelved next season, cleaning house seems a most appropriate first step to reeling in a wandering ship. How ironic that only a few days earlier I watched Whoopi Goldberg scoff off Variety's report that both Perez and Wallace were soon to be cut.

And if the rumors are true, and they tend to be in The View's case, they're on track for another lackluster year in the ratings with potential co-hosts the likes of: fashionista Stacy London, GMA Weekend anchor Paula Faris (whose name may simply be tossed in to provide some reason to watch Good Morning America on the weekend), Full House actress Candace Cameron-Bure (who's much more entertaining when she's not exploiting her religiosity for a seat at The View) and additional hopefuls; Sherri Shepherd and Molly Sims. All of whom are not brilliant conversationists and gain more from co-hosting the program than actually providing anything of substance to the show. They need The View, more than it needs them.

The hiring of Raven-Symoné was a mistake in my mind and here's why: it shows how rudderless The View has become in the wake of its ratings and identity crises. Moreover, how desperate they are to compete with The Real. Particularly on that program's home-turf for 18-25 year olds; a demographic The View has never entirely courted. And if Raven-Symoné is the antidote to combating The Real, new acquisition Michelle Collins, whose claim to fame was that she was managing editor of VH1's Bestweekever.tv and co-host of Logo's The Gossip Queens, must be their answer to The Talk.

Any alleged ratings boon (specifically between 18-25 year olds) and subsequent social media buzz provided by Raven-Symoné, an already generous statement to make since The View is still floundering in comparison to last year's numbers, can easily be attributed to the nature of her younger fanbase. A majority of which are users on social media platforms like Twitter and Facebook, where the show is seeing more discussion, as well as a demographic bump.

And so I propose a simple solution, alongside recasting the table, make the audience feel as though they have a stake in this program. Install screens in The View's table for the co-hosts to see tweets and Facebook messages coming in and allow them to react in real-time to them.

Instead of leading from behind, hire a robust and exciting panel that re-engages the program's core 25-54 demographic which is being lost to its competition, and bring an aging platform into the 21st century by way of social media.

Here's who should get the call:

After Joy Behar bowed out, The View has been missing its resident funny girl and no one can quite pull in headlines and deal with the repercussions in quite the way Kathy Griffin could. There were rumblings that Griffin might join The View when her time at Fashion Police abruptly ended. The barb throwing comedian, who's already a regular on the program, would fit right in. She thrives where others dare not to go and viewers can't get enough of her. Whether they're anxiously on the edge of their seats awaiting what she'll do to Anderson Cooper on CNN's New Year's Eve countdown, agonizing over her latest feud with Elisabeth Hasselbeck, Ryan Seacrest or even Demi Lovato, or whether she'll dispense a few more secrets about the lives of the rich and famous during her next Bravo special, on the principle of entertainment Griffin brings a most reckoning of powers.

Connie Chung would make the perfect moderator on The View and fill a void as rules keeper that only Barbara Walters had been able to maintain even when the nastiest of fights broke out between the panelists. As the second woman ever to anchor an evening newscast (and the first Asian woman to do so), Chung holds a special place in television history, not to mention, she's married to the king of daytime television and host of Maury, Maury Povich. Both are TV royalty and Chung herself has several Emmy awards and a George Foster Peabody Award. This is not to say that Chung isn't as fun or wild as the rest of them -- I guffawed when I saw her appear on Watch What Happens Live and offer host Andy Cohen a framed strain of marijuana named after her. Talk about a ratings grabber, Cohen emphatically introduced the idea of having Chung and Povich on every week after receiving an endless stream of comments and tweets throughout the night's show.

Robin Quivers is one-half of radio's greatest duos of all-time and helped pioneer one of the oldest communication mediums into the 21st century alongside legendary shock jock Howard Stern. After thirty plus years on the air, she's thrilled audiences by revealing things about herself and her life, which have made her a compelling personality to both watch and listen to. She's a performer, and dynamically so; tapping into Quiver's fanbase is a sure win for any program. By the numbers, Quivers, alongside Stern, has helped what was once Sirius XM's 400,000 subscribers grow upwards of 27 million subscribers, with a brand appeal that crosses into a wide 18-54 demographic. Certainly, if Stern could juggle hosting America's Got Talent and The Howard Stern Show, surely similar concessions could be made if Quivers were offered a seat at The View.

Lock Maria Shriver into a long term contract. She'll remind the audience of what the earlier seasons of The View were really about: intelligent women having an elevated conversation about a mix of topics from each day's news cycle. And Shriver is great on camera, not to mention she has six bestselling books, several Emmys and a Peabody to her credit. Not only would she be a good foil for any GOP co-host, but she's been married to one of America's most high-profile republican governors, Arnold Schwarzenegger, and can see both sides of the coin (and also the repercussions of it). Did I mention she's a Kennedy? Americans have always been infatuated with the life of political royals and getting a chance to realize they're nearly as normal as the rest of us is worthwhile if only for a season or two on The View.

Sarah Palin has always been a polarizing force. The right loves her, the left can't stand her, but regardless of what side you're on she makes for great TV. At one point the Today show even brought her on board to duke it out with GMA guest host Katie Couric, besting the veteran journalist at her own game when the ratings finally rolled in. She's a lightning rod for headlines and sets social media on fire with every tweet she sends out, even now as her relevance wanes. Palin still has an audience and at this particular moment is searching for her latest reinvention. After leaving FOX and her online subscription-based channel this year, why can't it be The View?