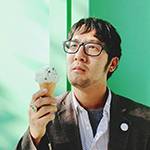 Jon Sung is a contributing writer for XPRIZE and copywriting gun-for-hire to startups and ventures all over the San Francisco Bay area. When not wrangling words for business or pleasure, he serves as the captain of the USS Loma Prieta, the hardest-partying Star Trek fan club in San Francisco.

The eyes. They're the windows to the soul, the limpid pools in which we drown in each other's gaze -- all that good stuff. But it's the 21st century; haven't we figured out anything else the eyes are good for? You know, besides seeing?

The answer is yes, and Google is on the case.

If you're one of the millions of diabetics around the world, you're familiar with the pain and annoyance of having to monitor your glucose levels by pricking a finger and testing drops of blood multiple times a day. At best, it's a hassle -- bothersome enough to make someone test their glucose less often than might be optimal, which can lead to problems. But blood's not the only body fluid you can get a glucose reading from: tears work too. Rather than make diabetics cry on demand though, Brian Otis and Babak Parviz at Google's secretive research facility, Google X, figured out they could stick a sensor on a contact lens. The sensor connects to an antenna also mounted on the lens, which beams the data to a smartphone, giving you continuous glucose monitoring throughout the day without ever touching a needle. The idea certainly seems sound; now it's just a matter of getting the technology right and bringing the lens to market, which Google X is doing with Novartis, a company that knows a thing or two about getting FDA approvals.

Blood glucose isn't the only thing you can monitor with a lens like this. Certain kinds of cancers can produce chemical markers that appear in tears; measuring these markers can be a good indicator of whether a tumor has been fully eliminated, or if cancer formerly in remission is on the way back. Instead of resorting to more invasive technologies, a cancer patient could just pop one of these contact lenses on and get an alert when something changes.

Google was granted a patent for a contact lens with an embedded chip and sensor two months ago, but the company's not commenting on timelines, or even if any commercial products are in the works.

Now that our eyes will be watching out for us in more ways than one, is there something we can do to return the favor -- like preventing blindness? Glaucoma, the second leading cause of blindness worldwide, is a condition people have to watch out for as they age: fluid inside the eyeball stops draining properly and pressure builds, which damages the optic nerve. It's especially pernicious because the pressure buildup isn't usually detected until it starts to do harm, at which point it's too late; damage to the optic nerve can't be corrected. There's an existing medical instrument called a tonometer that can measure fluid pressure inside your eyeball, but the measurements are usually only taken once a year at annual checkups and can sometimes be misleading.

A company called Sensimed has a solution it calls the Triggerfish system that involves a special contact lens you wear for 24 hours. It's got a sensor on it that measures how much your eyeball flexes and transmits the data constantly to an adhesive antenna system that encircles the eye (making you look a bit like you've been assimilated by the Borg).

The risk of getting an erroneous measurement plummets when you've got a full 24 hours' worth of data, but what if you could do more? A company called Implandata and scientists like Yossi Mandel and Stephen Quake are working on intraocular sensors that can be implanted directly in the eye and last for up to 10 years at a time. Their experimental versions, which rely on different technologies, are being tested on people already undergoing operations for cataracts, an ocular malady unrelated to glaucoma.

Eventually, we're going to arrive at the best way to detect glaucoma before it can do any damage, which means preventing blindness before it starts. That's great news on its own, but even better when you consider the other possibilities we're starting to imagine with smarter contact lenses: how about a lens that deforms itself to provide autofocus for your eyes? Novartis and Google X are working on that too. Bifocals might one day go the way of the Model T, to say nothing of eyeglasses themselves (except as fashion statements). Someday in the not-too-distant future, we might find ourselves putting on contacts that incorporate miniaturized HD displays, ideal for using something like Microsoft HoloLens. Or maybe Google Glass will come back as Google Eye! And why stop there? I'd be all about contact lenses that granted enhanced night vision, or the ability to see into the ultraviolet or infrared ends of the spectrum (think 1980s "Predator" vision). I'm not sure anyone would be ready for the awkwardness of X-ray vision though, to say nothing of heat rays. Some things are better left to Superman.