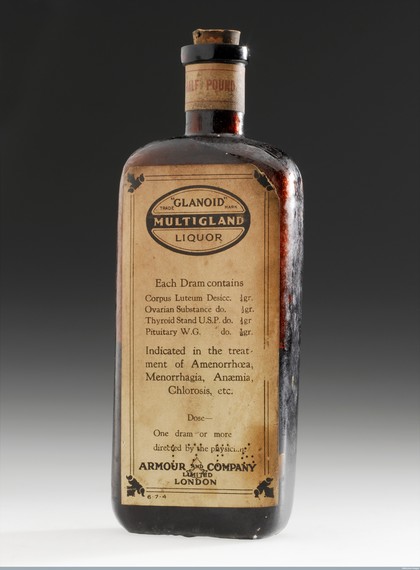 In the early 1900s, you could buy all kinds of hormone-based tonics claiming to cure everything from cancer to constipation. A meat-packing company, for instance, sold the key ingredients for the hormone supplement "Glanoid Multigland Liquor" (see below). The remedy contained a slurry of liquefied ovaries, thyroids, and pituitaries (a brain gland)--all the stuff they presumably couldn't sell to butchers. It was called a liquor, which sounds more cocktail than cure, but the bottle said it helped with problematic menstrual cycles (too heavy or too few) and also for chlorosis (19th century medical jargon for being really tired)

It's easy to poke fun of the gullible folks back then. What were they thinking? Maybe the same kinds of thoughts that would lead someone to buy similar nostrums available in health stores these days.

Adrenaplex, for one, claims to "manage fatigue" with "powerful ingredients for stressful days." Among other things, the tablets contain Argentinian cow's adrenal, the hormone-spewing glands that cap the kidneys. The makers reassure buyers that the pills do not have caffeine, soy, dairy or gluten.

Seriously? I'd be more worried about something containing a cow adrenal than caffeine or dairy.

As for adrenal fatigue, endocrinologists think it's a bunch of hogwash. According to the Endocrine Society, adrenal insufficiency (lacking adrenal hormones) is a real disease, but adrenal fatigue is not. It's important to understand that the adrenal remedies online are considered supplements, not drugs. That means that the Food and Drug Administration doesn't oversee them, thanks to a 1994 law pushed through by supplement lobbyists. Consequently, you don't know what you're really getting in the bottle.

The Endocrine Society warns that if you take adrenal gland extracts when you don't need them, you can shut down your own adrenals, wreaking havoc on your body. The extra adrenal hormones signal to your body that you've got enough, slowing down your internal hormone production and that can eventually kill the whole system. You need your adrenals for your body to react to stress and to maintain blood pressure. At its worst, the hormone cortisol plummets, leading to confusion, weakness, and a deadly drop in blood pressure.

The society suggests that if you are feeling overwhelmingly tired, depressed, and weak--see a doctor and get a real diagnosis.

If I wake up feeling a little stressed or just a bit under the weather, the one thing that would make me feel more anxious and sick to my stomach would be drinking cow adrenals.

The label is correct to say it's all-natural. Animal body parts are all-natural. But nature can be dangerous. Tobacco is natural and kills. Arsenic, a natural component in the earth, is poisonous too.

So despite the gluten/dairy/caffeine free homily, I think I'd be better off re-energizing with a cup of coffee and a gluteny, buttery muffin. Or if it's a weekend and brunch time, I may forgo the coffee for a Bloody Mary. It may lack the adrenal glands but the tomato should provide a shot of vitamin A, which has nothing to do with fatigue but is involved with maintaining a healthy immune system.

For more information on true adrenal insufficiency, check out this link.

Author, 'Get Me Out: A History of Childbirth From the Garden of Eden to the Sperm Bank'; adjunct professor, Columbia University