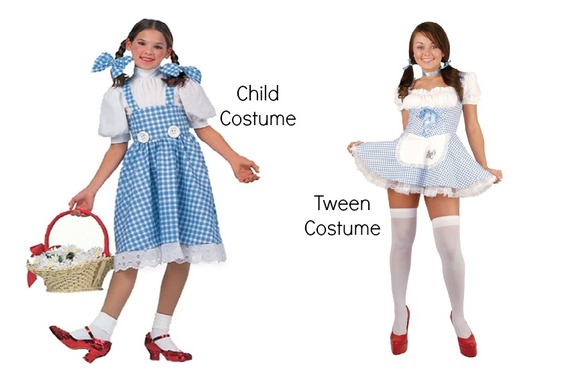 My daughter has officially entered the tween years -- and Halloween just got a hell of a lot more problematic.

In years past, her wishes to dress as a witch or mermaid or princess were pretty easy to fulfill. We went online, found a suitable girls' costume that would be warm enough for a chilly night of trick-or-treating, and ordered it. This year, though, the game has changed. Big time.

According to the costume manufacturers of America, once a girl child reaches double digits, it is officially time for the Halloween hoochification process to begin.

Got a wannabe tween Robin Hood on your hands? Your 11-year-old will have to steal a few more dollars from the rich if she wants pants for her costume.

Cleopatra is a great costume option for your girl -- at least until she hits the tween years. At that point, she'll have to settle for dressing as PharaHo.

You'll feel like you're throwing your 10-year-old to the wolves by buying her a tween Little Red Riding Hood costume. Hey. It's all about realism, people.

While the child's Little Miss Muffet costume is totally adorable, the tween version will barely cover your girl's tuffet.

I've been writing about inappropriately sexy tween and teen Halloween costumes for years, but now that my daughter is actually old enough to wear some of them, the subject really hit home -- particularly when I began comparing the child and tween versions side by side.

I realize that the teen costumes are even worse -- but I have a much bigger issue with sexy tween costumes. Teenagers, after all, have a growing understanding of (and preoccupation with) their sexuality. I believe that it's normal for teen girls to want to experiment with dressing provocatively, and Halloween is a prime opportunity for them to try to get away with it. As a parent, I may not like it -- and you can bet I'll do all I can to stop it -- but I absolutely understand it.

So moms and dads, can we just all stop this right now? Can we make a personal pledge to JUST SAY NO when our daughters ask us to order the child's French Maid costume in a size 8/10?

Could we maybe even, if we're feeling especially brave, use the widespread availability of these costumes as an opportunity to talk to our daughters about why they might be inappropriate for girls, even though MacKenzie and Harper and Terpsichord are all wearing them this year?

Could we all maybe do that please?

I didn't think so.

42 Fierce Halloween Costumes For Girls
More:
inappropriate-halloween-costumesParenting Halloween Parentsparents-tweens
Newsletter Sign Up
Raise the kind of person you'd like to know
Subscribe to our parenting newsletter.
Successfully Subscribed!
Realness delivered to your inbox