I was visiting the Museum of the City of New York this past weekend and drifted into the exhibit on Affordable Housing. There, amidst all the information about rent stabilization, rezoning of neighborhoods and vintage pamphlets on public housing, was a curious letter signed by Bob Dylan.

"Could that be THE Bob Dylan?" I asked my wife, not that I've ever heard of another. 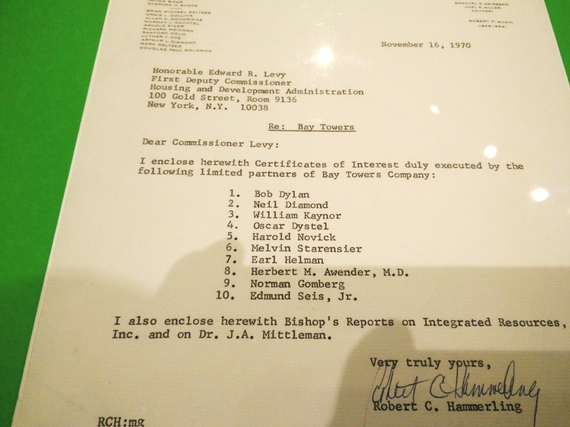 The letter was dated November 16, 1970 and addressed to the city's first deputy commissioner for the department of Housing, Preservation and Development and sent by one of the developers of the Bay Towers, a Mitchell-Lama Development being built on Beach 98th Street in the Rockaways.

The letter reads: "I enclose herewith Certificates of Interest duly executed by the following limited partners of Bay Towers Company."

Bob Dylan is the first name listed, following by Neil Diamond at No. 2. The only other recognizable name is that of Oscar Dystel, a legendary publisher credited with saving Bantam Books. The second page of the letter was signed twice by none other than Bob Dylan. 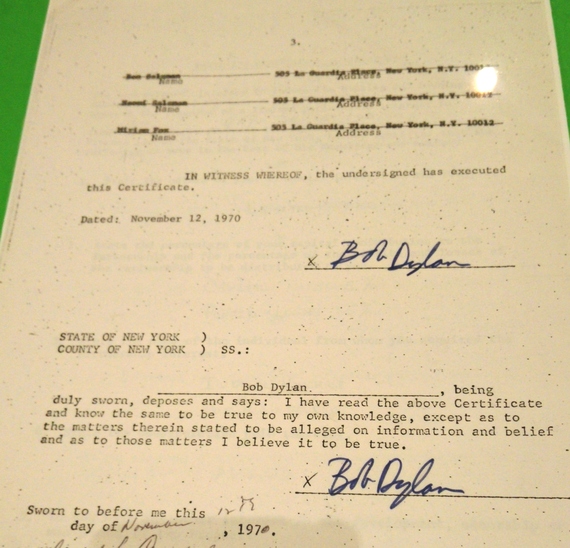 There was no other information on this letter so I got in touch with Thomas Mellins, the guest curator of the exhibit. What gives? I asked and Mellins had the answers.

"When the Michell-Lama program began [which, in a nutshell, is state subsidized housing for the middle class], it was difficult to get big developers interested so they allowed small investors to invest," Mellins said. "Small investors got certain tax advantages that were appealing."

"Small" investors like Bob Dylan and Neil Diamond? Yes, Mellins said, the famous singers had bought in to an otherwise nondescript housing development way out in Queens, New York.

"Someone at HPD told me they probably had the same accountant," Mellins said. "It's doubtful Dylan was aware of this specific investment."

In other words, Dylan probably signed whatever his accountant put in front of him. He most likely had other things on his mind since, just a few months earlier, he had released his Self Portrait LP.

Mellins chuckled when he noted that investors at that time tended to be "not very wealthy investors." By 1970, both Dylan and Diamond surely had boatloads of money flowing their way. Mellins did not know how much each man contributed but he said both had cashed out long ago.

So if you live out in that development and one day find yourself "seeking shelter from the storm," you can "be a believer" -- your landlords were once Dylan and Diamond. Sorry :)