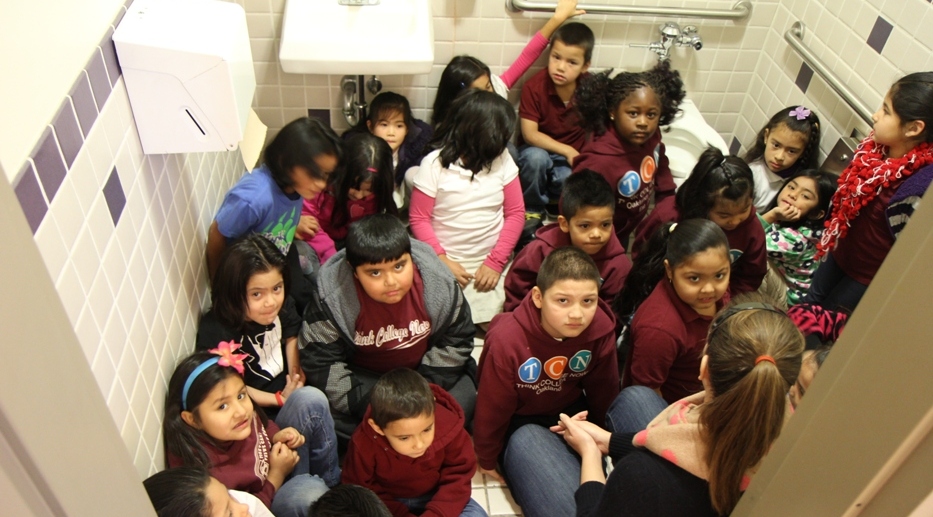 Twenty-one first graders pile into a bathroom during a lockdown drill.

As recently as a year ago, schools across the country, including the middle school in San Francisco where I used to teach, were toning down security. But since the school shooting in Newtown, school districts across the San Francisco Bay Area are ramping up safety measures.

Back in 2008, I never did lockdown drills with my eighth grade students, but now lockdowns are becoming standard across the region. San Francisco Unified is piloting giving digital floorplans of every school to police, and instituting district-wide lockdown drills.

In Oakland, Julia Gelormino has a “game” she plays with her first grade students. She calls it hide and seek. It starts with an announcement on the PA that Dr. Lock is in the building. She tells her students, "So that’s our special code."

Next, all 21 kids in their uniforms head to the bathroom, and one by one they line up and squish inside the small room. On her cue, all her students crouch down on the floor and become silent. Well, almost all of them.

Gelormino's tone of voice becomes serious as she focuses on one chatty student. "I don’t want to scare you, but Willie, if someone was trying to harm us, and you were making that much sound, guess where they would go first? Here. So right now you weren’t helping us to be safe," she says.

These kids are used to drills. They're used to real lockdowns too. Gelormino says she never knows the reason until afterwards. It could be a robbery in the neighborhood, or something more serious. Since the shooting in Newtown, the lockdowns have meant some really hard conversations with her first graders.

"One my kids asked, what would happen if they shot through the door? So she had obviously watched the things on the news," she said.

On average, at least three schools are shut down in Oakland every week. Neighboring cities like Berkeley and San Jose also use lockdowns, sometimes even for preschoolers. Often teachers, parents, and students are unaware of the severity of the situation. Some parents receive a text when a lockdown is in progress. Other parents get the news through a note in their kids’ backpack the next day.

Troy Flint of the Oakland Unified School District, says parents are demanding even more security. "I’ve received many unsolicited emails from parents, which were also sent to the superintendent and board members, asking for increased police presence," said Flint.

But how does that feel to a six and a half year old? I asked Gustavo Hernandez about the drills in his elementary school. "I feel kind of, like, scared," he said. When I asked him why, he told me that if they forgot to close all the windows and doors, the strangers could get him. But Hernandez told me he understands they need to practice.

That's good advice for anyone trying to stay calm in a classroom.

Originally published on Youthradio.org, the premier source for youth generated news throughout the globe.
Youth Radio/Youth Media International (YMI) is youth-driven converged media production company that delivers the best youth news, culture and undiscovered talent to a cross section of audiences. To read more youth news from around the globe and explore high quality audio and video features, visit Youthradio.org