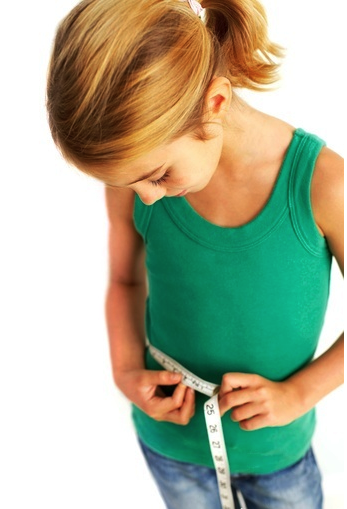 Let me begin by stating that Jamie Oliver is a hero for publicly and knowledgeably fighting childhood obesity. And for doing so with whole and local foods. No child should have to suffer the medical consequences of obesity or even the emotional humiliations of being significantly overweight. However, I'm starting to have concerns that my two children (boy -- 7, girl -- 11) are being targeted for a low-fat eating campaign that is not in their best interest.

I gave birth to lightweights. Thus far, both my children are built like me: small bones, moderate padding and muscles on those bones. Without disclosing numbers, I assure that they have both grown consistently along their own very low percentile curve of weight and height. The only anomaly to their equation is that my son has severe and multiple food allergies and there was a brief time in his babyhood when his weight gain slowed due to dietary confusions and restrictions.

At times, I feed my children differently because of my son's allergies. But after cooking and shopping for them for years, observing both their appetites, their energy, and their overall health, I have adapted the same fat philosophy for both children: I think they need a generous (not moderate) amount of healthy fat (I favor extra virgin olive oil 95% of the time) in order to feel well, to behave well and to quell cravings and excessive snacking.

I know, I know -- my children are in a minority. They have promising genetics and evidence of good metabolisms. Yet neither adults nor children can thrive without some amount of fat in their diets. According to The American Journal of Clinical Nutrition, vitamin absorption may be enhanced by fat. So given the varied quantities of fat that we all need, maybe our nationwide message should be "Eat good fat." And then we need to tell our children what those "good fats" are.

Television commercials, peers and even school nutritionists tell our children that 'too much fat is bad' and 'being fat is bad.' True. But children are literal beings and unfortunately, no one is audibly breaking down the fine points of the low fat argument. Our children do not know that Jamie Oliver and Michael Pollan are directing the public in sustainable and wholesome directions while the media is sending out the usual mixed messages.

Is it possible to clarify our "fat message" before society sets the stage for food issues, eating disorders or plain old fussiness? Peggy Orenstein points out that the drama has already begun. In her recent Motherlode column she describes how she models, rather than discusses, healthy eating. I applaud her approach.

But the majority of children may not have parents as wise or as able to model sane eating habits. What then? Like Jamie Oliver, eventually we will have to talk to our children. And I, don't believe that it helps to hear the word "low" and "fat" in the same conversation.