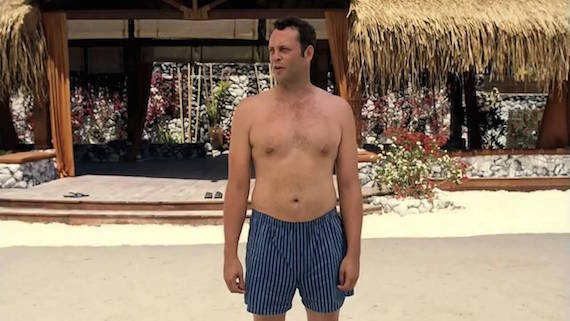 Some folks might glorify a guy with a "dad bod" as a stud, but medical, fitness and nutrition experts put that dude in the dud category.

With a 500-word essay published in March, Clemson University psychology major Mackenzie Pearson sparked a national conversation about the "dad bod," characterized as a man's endearingly soft physique built by pizza and Pabst. Think the old Chris Pratt, not the newly buff one.

"While we all love a sculpted guy, there is just something about the dad bod that makes boys seem more human, natural, and attractive," Pearson wrote.

Further stoking the dad-bod dialogue was a study released in July by Northwestern University researchers showing that first-time dads add a few extra pounds to their frames compared with their childless counterparts.

"You have new responsibilities when you have your kids and may not have time to take care of yourself the way you once did in terms of exercise. Your family becomes the priority," says the study's lead author, Northwestern medical professor Dr. Craig Garfield.

While a family-focused man with a dad bod might be "attractive," medical, exercise and nutrition professionals say it's anything but sexy. In fact, it can be deadly. A guy with a dad bod, whether he's actually a dad or not, faces a greater risk of heart disease, diabetes and cancer, Garfield says.

"Making a dad bod acceptable seems like another excuse for men to rationalize their overeating, overdrinking and lack of exercise," says Dr. John Higgins, a sports cardiologist at the University of Texas Medical School at Houston.

Higgins warns that aside from physical damage, dad bod can trigger reduced self-esteem, thus harming work, family and social activities. On top of that, psychotherapist Daryl Cioffi indicates mental health professionals are noticing that dad bod is contributing to depression and anxiety symptoms among men in their early 40s and above, thanks to unrealistic body expectations that she says are increasingly fueled by the media.

While mental effects are concerning, Higgins and others are more worried about the potential for dad bod to endanger a man's physical health, particularly since three-fourths of American men are classified as overweight or obese.

Colette Heimowitz, vice president of nutrition communication and education at Atkins Nutritionals, says dad bod can easily be "reversed" if a man makes simple adjustments to his diet and exercise routines.

On the exercise front, Brown recommends that a man who's saddled with a dad bod earmark at least 2 percent of his day, or 30 minutes, to getting fit. That can include walking, running, cycling or swimming.

In terms of diet, Higgins suggests loading up on fruits, nuts and vegetables to combat dad bod along with cutting back on calorie- and fat-laden foods like pizza and hamburgers. Personal trainer and sports nutritionist Shane Allen, a spokesman for PersonalTrainerFood.com, advises avoiding starchy carbs, sugars and alcohol to help prevent or shed dad-bod weight. "This cuts off your body's fat-producing mechanism," Allen says.

As they preach the virtues of a healthy approach to diet and fitness, experts like Brown will keep frowning on any glamour attached to the dad-bod belly.

"Dad bod becoming trendy is like Type 2 diabetes becoming trendy. Any health problem that is a byproduct of poor choices should never become chic," Brown says.

Brown has especially harsh words for married dad-bod guys, whose wives typically are subjected to more body shaming than their husbands are.

"Choosing to have a dad bod is not too different from choosing to go on Ashley Madison to cheat on your wife," Brown says. "It is definitely cheating on yourself, as you're not living up to your potential, or living as the person you represented walking down the aisle or courting your bride."

John Egan is a contributing writer for Healthy Bites, a blog operated by Vitacost.com.