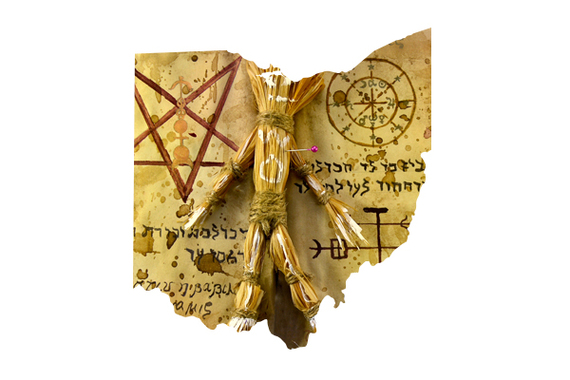 In Headless Horror: Strange and Ghostly Ohio Tales, author Chris Woodyard investigates anti-witch remedies and witch-tests conducted in 19th century Ohio. In the village of Bethel in Clermont County, there were some families that believed in the power of witchcraft. Two such families are of note, the Evans and Hildebrand clans. The latter believed their eccentric daughters to be possessed by evil spirits. So, various exorcisms were performed... as one does.

A large bag of linsey-woolsey was made and held by a member of the family, while the other members went through some ceremony, at the conclusion of which it was supposed the witch had been forced to take refuge in the bag, which was quickly closed, and after being firmly tied was carefully laid on the porch of the house, where it was cut into a thousand pieces with a sharp axe. The fragments were then gathered together and burned; and one would surely supposed that if the witch had perchance escaped death while the bag which confined it was cut into fine shreds, the fire would put an end to its existence.

Unfortunately, this tactic didn't work. Shocking! The girls believed their neighbor Nancy Evans was a witch and she was ultimately shunned. Surprisingly, the evil remained. So, a witch hunt ensued and Nancy was taken to a large weighing scale, and as "tradition prevailed that if a witch were weighed against the Holy Writ, so great would be the overpowering influence of the Bible that the witch would be compelled to tip the beam." That actualy makes a lot of sense. So, the good townsfolk constructed some weighing scales and Nancy was put on the scales to be tried "against all witchcraftry and diabolical practices."

Now, here's where it gets weird...

When Nancy was put on the scales she was HEAVIER THAN THE BOOK! The neighbors all scratched their 19th century noggins, shrugged their shoulders and were all like "Welp, guess she's not a witch!"

In the course of a few years the Evans family removed to Brown County, where the old lady died respected by all who knew her. The Hildebrand family also removed, and since their departure witches have no more flourished at Bethel than at any other place, and the Village became noted for the general intelligence of its inhabitants and the neighbourly relations which existed among them, and continue to this day.