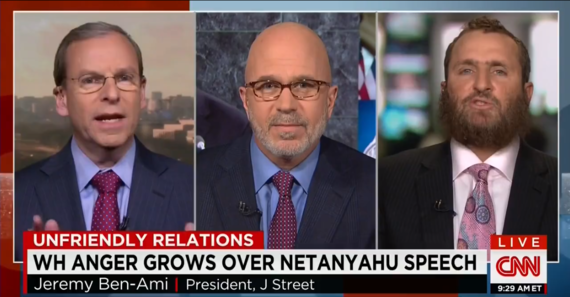 I'd never met Shmuley Boteach or interacted with him until last Friday when we spent seven minutes debating via satellite on CNN the wisdom (or lack thereof) of Speaker John Boehner's invitation to Israeli Prime Minister Netanyahu to address a joint session of Congress.

Since then, I've been the subject of a fairly intense attack by Boteach who is both a well-known rabbi and a former Republican candidate for Congress in New Jersey.

The dual roles are not in themselves unusual. Many in Washington wear different hats for different audiences - pundit, journalist, religious leader, partisan.

But rarely have I seen someone identified primarily as a rabbi act purely as a partisan political activist.

Mr. Boteach and I differ on the wisdom of the invitation to Prime Minister Netanyahu by Speaker John Boehner to speak before Congress two weeks before Israel's election.

In my opinion, the invitation represents both inappropriate meddling in the politics of Israel and an inappropriate intrusion into the domestic American debate over the need for new sanctions on Iran.

Worst of all, it deepens the perception that the US-Israel relationship these days is less a matter of bipartisan consensus than a partisan political football.

The invitation has been criticized on all sides of the political map, with Fox News commentators and former Israeli Ambassador Michael Oren joining Democratic leaders in Congress and Jewish community leaders such as the ADL's Abe Foxman in suggesting the invitation should be postponed.

What's undisputed is that the Ambassador did not inform the White House, State Department or Democratic leadership in Congress about the invitation before it became public.

What's also clear is that it's hard to find people willing to defend the invitation - which brings me back to Shmuley Boteach, who apparently is.

I must say that, given the assignment, I can understand why he went into the CNN studio Friday looking for a way to shift the conversation away from the damage the invitation is doing to the US-Israel relationship.

Therefore, when I criticized Ambassador Dermer for "manufacturing" the invitation as a "cynical political ploy," Boteach adeptly leaped at a way to avoid the merits of the question by challenging whether I in fact knew that the Ambassador "manufactured" the whole affair. On air, I said I was sorry if I misstated the Ambassador's role, but reiterated that what should matter to friends of Israel is the impact of this incident on Israel's relationship with the US.

I have to admit to being astounded by the way Mr. Boteach has behaved in the aftermath of our appearance.

My Jewish values teach me - even as I disagree with people - not to speak ill of them or to cast aspersions on their motives. My rabbis, over the years, have found many ways of reinforcing for me the Jewish principles that should guide debate over even the most contentious of matters.

I would expect a rabbi steeped in those values and traditions to welcome my willingness to acknowledge a mistake.

Instead, Mr. Boteach has taken to social media to lambaste me in the most personal of terms. His tweets, Facebook posts and other writings seem to revel in casting my willingness to apologize as a weakness and a personal flaw.

No question, his is behavior I am used to from partisan operatives. After all, I've spent thirty years in politics. And, believe me, after seven years running J Street, I've got a thick skin and can give as good as I get.

Certainly, the way that Mr. Boteach has jumped on my willingness to say "I'm sorry" is political gamesmanship at its finest - and I accept that from a partisan political hatchet-man.

I find it far harder to accept such behavior from someone who self-identifies primarily as a spiritual leader of the Jewish community.

I'd say to Mr. Boteach that if you want to behave like a partisan activist, then own up to it and identify yourself as such. But if you're going to identify yourself primarily as a rabbi, then consider behaving in accordance with the values and the principles of our people.

President and Founder of J Street