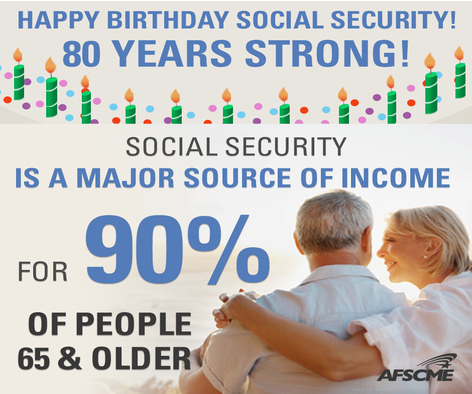 Franklin Roosevelt signed the Social Security Act 80 years ago this week, but if you read what his critics were saying about it at the time, you might think it was just yesterday. It was a job killer and an attack on Big Business. In the words of Delaware Sen. Daniel Hastings, it would "end the progress of a great country."

Of course, it didn't. Social Security is a major source of income for most of the seniors in this country; nine out of 10 individuals older than 65 -- more than 59 million Americans -- receive Social Security retirement payments. It's one of our most beloved government institutions.

Social Security has changed America in the past 80 years, but some things never change. We still have politicians charging at our essential social safety net with the same tired arguments.

Just take a look at the candidates running for President in 2016. Many propose that we raise the retirement age or privatize the program. What used to be the untouchable "third rail" of politics was open game in January when members of the newly elected House of Representatives arrived in Washington. Their first act was to vote for a rule change that could cut benefits in the future.

Why are powerful people going after such a beloved program? They'll tell you that the system is nearly out of money, and that the problem is so deeply rooted there's no way to fix it without reducing benefits. But that's not true. Social Security is on track to be fully funded for the next 20 years, according to the most recent report from the agency's trustees. And after that it will still be 75 percent funded. And we already know how to fix it.

Right now, Social Security contributions are only collected from the first $118,000 of a person's yearly earnings. That means that while the average American contributes approximately 6.2 percent of her or his annual earnings to Social Security, the wealthiest 16 percent of Americans contribute a tiny proportion. Economists say the program would be fully funded if we could eliminate that cap and collect equal contributions from high-income workers.

Social Security is of critical importance to our nation. Before the program was established, between one-third and one-half of all senior citizens spent their last years in dire poverty. Today, seniors are the least likely of any age group to live in poverty. The AARP estimates that approximately 35 percent of all Americans aged 65 and older, or 14.5 million people, would be living in poverty if not for Social Security retirement payments.

Our goal should be to improve upon this success, not to go backwards. Poverty among seniors is still a very real problem, especially among women and people of color. Income inequality grows even wider for these groups during retirement.

The public overwhelmingly supports solutions that preserve and improve Social Security benefits. A 2014 survey by the National Academy of Social Insurance found that 83 percent of all Americans, including 71 percent of Republicans, think high-income workers ought to contribute more to Social Security. And 77 percent said they would be willing to pay more out of their own income in order to secure a good retirement.

Once upon a time, financial planners pegged Social Security as one leg of a three-legged stool comprising retirement security -- along with pensions and savings. Today, with many employers eliminating real defined-benefit pensions and with few Americans saving enough for retirement, Social Security is even more important.

For politicians to continue to attack this program, instead of planning on how to expand it, is a losing proposition. Voters may send them packing toward their own retirements.