The last few weeks have seen the best and the worst in terms of climate change.

Victories which pundits told us for years were "impossible" have been coming at a breathtaking pace. Coal demand is in terminal decline worldwide, after a dramatic -- if not complete -- change of course in China. Oil is also in trouble, with Shell and Statoil retreating from the Alaskan Arctic, President Obama rejecting the Keystone XL pipeline and Alberta putting a cap on tar sands oil. Meanwhile, more and more key players are signing up for a 100 percent renewable future - from cities to companies. Many communities hit by extreme weather are rebuilding sustainably and hundreds of thousands worldwide are building people power to push forward with climate action now -- and in the future. 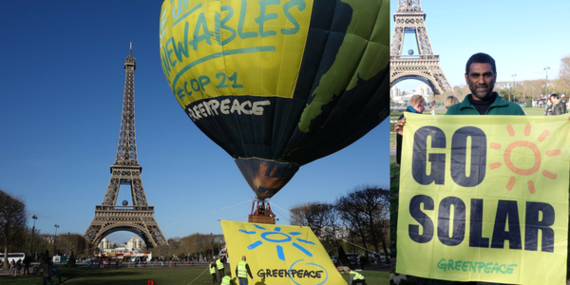 At the same time the news is getting worse. This year will be the hottest year in recorded history. And Indonesia's forest fires were a massive blow for climate action, emitting more than the entire United States of America -- a powerful reminder of how fast hard-won emission reductions can be jeopardized by greed. Also, despite the climate movement's recent victories, too often polluters are still dictating policy in North and South. The energy revolution, which is now inevitable, is not going as fast as it needs to, if we're to keep our climate safe.

The meaning of this year's climate negotiations has been changed by the recent murderous attacks in Paris, the host city. In response to these terrible crimes, the climate marches around the world this weekend are not just a call to action, but an expression of our shared humanity. Governments must hear this call and make the climate negotiations demonstrate that human cooperation can solve our common problems.

In order to do that, the Paris climate conference must be a starting point for faster and more decisive climate action.

As Greenpeace, we have three key criteria that governments must meet:

1. Does the Paris climate agreement send a signal that the age of fossil fuels is over?

The world of energy is changing fast. Governments in Paris must solidify the direction towards renewables that the world is already on, and state clearly that fossil fuels must be completely phased out by 2050. We need a just transition to a world run on 100% renewable energy for all; a world where workers, our health and our children win. This signal must be clear. It must not be stymied by delays. Therefore, we will ask:

We already know that the pledges governments are coming to Paris with are not good enough and will still lead to a very dangerous and destructive world (between 2.7 and 3.7 degrees warmer than in preindustrial times -- the estimates vary). Governments and companies need to increase their ambition immediately after Paris. We simply cannot afford to be stuck with insufficient targets for the next 10-15 decisive years. The targets must be ramped up before the Paris agreement enters into force in 2020. And governments need to review and enhance their actions every five years after the Paris agreement comes into force in 2020.

3. Does the Paris climate agreement deliver global solidarity and ensure that polluters pay for the damage they cause?

Some impacts of climate change are with us already and we need sufficient and reliable funding and support for those affected. Greenpeace, for example, supports anchoring the "loss and damage mechanism" under the Paris Agreement, to help support the vulnerable. We expect governments to meet the growing adaptation needs. We will also continue to hold polluters accountable, as we are doing with our call on the Commission on Human Rights of the Philippines (CHR). We need the culpability of big fossil fuel companies for fuelling catastrophic climate change to be addressed. 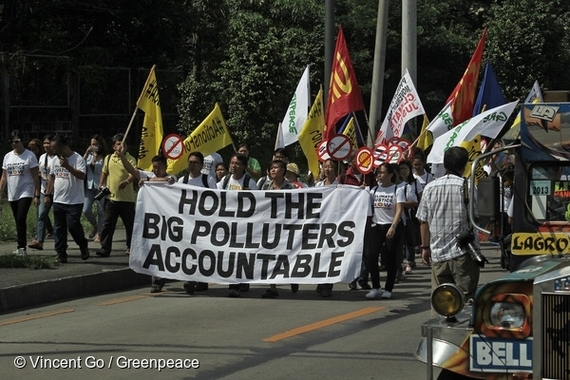 If the three criteria above are met, we'll take an important step towards a world in which energy is clean, cheap and accessible to all. A world where air and water will be cleaner and where global warming avoids truly hazardous temperatures.

But even if governments take us this one step forward in Paris, it is still only one step. We are the ones that have to keep marching to get us to where we need to go. We need to keep up the pressure in the months and years after the Paris summit. The race between renewables and climate change will only be won if we keep winning like we have been doing on Keystone, coal and the Arctic. We must continue to build our power as a climate movement worldwide in 2016. This is how we force politicians across the globe to end the fossil fuel era and deliver a decent environment for all.